You are here: Home / Copepods / Benefits of Live Copepods / Copepoda: The Ocean’s Cornucopia

In 1905, an engineering mishap caused the Colorado River to flood a shallow basin over the San Andreas Fault in California. With evaporation rates that exceeded rates of inflow, the massive lake began to increase in salinity; Salton Lake was born. Soon, this artificially (and indeed accidentally) made inland sea would develop its own rich ecosystem. At the center of its ecological succession was a tiny crustacean—a copepod of the genus Apocyclops. 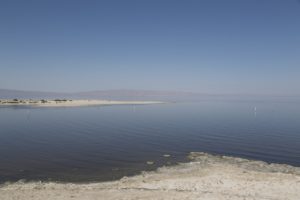 Copepoda like the Apocyclops very quickly became a keystone species in the Salton Sea; not only did it serve as an important intermediary between primary producers (e.g. phytoplankton) and larger consumers (e.g. fish), but it even helped to stabilize water chemistry by controlling boom-and-bust blooms of algae. By the 1950s this “sea” was ecologically developed enough (and its waters were sufficiently salty) to stock with marine sportfish species. These fishes fared well, no doubt because of the ample food supply (copepods, that is) for their larvae. But a surprise boost to the fish population came a few years later when tilapia were introduced to the area. Tilapia are well-adapted for filter-feeding and can exploit zooplankton both as fry and as adults. With a bountiful supply of copepods at hand, numbers of tilapia exploded. This change in ecological structure was not at all detrimental to the sportfish populations; to the contrary, with so many tilapia around to prey on, these larger fishes thrived as well (as evidenced by the usual tilapia found in their guts).

So, what is the lesson in this story? Copepods form the base of numerous and diverse aquatic trophic structures. They can be critically important even in artificial environments such as the Salton Sea and your marine aquarium.

The main reason that copepods can be found in so many aquatic habitats (almost all of them, really) is simply that there are so many kinds of copepods. Zoologists argue about the estimated number of extant copepods species. It appears that there are at least 8,000 copepod species in the subclass Copepoda, though some suggest that there may be as many as 20,000. The greatest number of these species (and probably the most ecologically important) are pelagic in nature, though many odd forms (for example, those that live as parasites on other animals) exist. While the largest copepod species (Pennella sp.) is a whale parasite that may reach a foot in length, the vast majority of Copepoda is comprised of those little bug-like things we aquarists are most familiar with.

This massive group can be divided into three basic subgroups, namely the calanoids, the cyclopoids and the harpacticoids. The largest group, which is mostly pelagic and marine, is formed by the calanoid copepods. The cyclopoids (e.g. Apocyclops spp.), which are characterized by having a single eye (really a fusion of the two eyes), are a mixed bag, having both pelagic and benthic forms in all kinds of freshwater, brackish and marine environments. The harpacticoid copepoda most often live a benthic lifestyle as adults. For this reason, harpacticoids (e.g. Tigriopus spp. and Tisbe spp.) have been especially popular with aquarists as members of the clean-up crew and as food for various microcrustacean-eating fish and invertebrates ranging from corals to mandarin fish.

Aquarists might refer to all of the little specks floating or crawling around in their tanks by the blanket term “pods.” They really may be seeing a whole myriad of microcrustaceans including decapods, brachiopods, isopods, amphipods, and so on. But, as it is in the sea, these will most likely be dominated by copepods.

Copepods are not only numerous in numbers of species, but also in numbers of individuals. In fact, they are probably the most numerous animal on Earth. In many aquatic communities, they claim the greatest proportion of the total biomass. Easily accounting for 95% of the zooplankton in the world’s oceans, they have been given the term “locusts of the sea.” For example, in tropical South Pacific waters, certain species may occur in densities of 500,000-1,500,000 individuals per cubic meter. Copepod swarms can exceed volumes of 50 cubic meters. This means that the largest and most dense swarms can include numbers of as many as 75,000,000 individuals!

Their importance in marine food webs comes from the quality of nutrition they provide, as 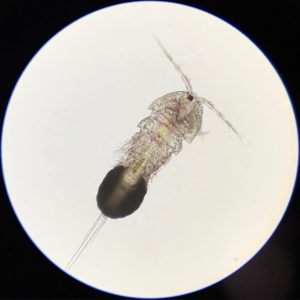 well as sheer quantity. Overall, they are nutritionally well-balanced and even come with their own roughage. But it is primarily their rich content of oils, waxy esters and essential fatty acids that make them so indispensable. As if that were not enough, copepods have one of the highest protein contents of all aquatic animals, which no doubt spurs the growth rates of those animals that consume them. Many of these vital compounds are produced only by plants (e.g. microalgae), but are passed along the food chain as copepods eat the algae and then are themselves eaten by other creatures. And we are not just talking about little fishes here; even some sharks and whales rely on copepods as their principle food source.

Aside from their great abundance and excellent nutritional profile, copepods have even another trait that makes them useful as a food for a wide range of animals. Their development is indirect. This means that they undergo many different stages before reaching adulthood. During this transition, an individual may change significantly in terms of size, shape and even behavior. The many forms they take during development make them acceptable as food for a larger number of predators. For example, a sea fan might feed on tiny larval Tisbe copepoda as they float about in the water column, whereas a small fish such as a six-line wrasse might pick larger, mature individuals from rock surfaces.

So, while those little specks in your tank may not look like much to the naked eye, they arguably might be the most ecologically important, and even interesting, living things in the system. Copepods are a major component of aquatic biological communities—artificial or otherwise—and naturally promote the growth, development, health and coloration of all animals that feed on them. Being as they are the foundation of most natural food webs, they should certainly be present in any marine aquarium.