You are here: Home / Copepods / A Closer Look at the Harpacticoid Copepod Tisbe Biminiensis

There are many different reasons to add copepods to one’s marine aquarium system. Each copepod species has its own set of attributes that make it best suited for particular purposes. For example, some aquarists might need a smaller pod that reliably grows to large numbers by feeding on unwanted organic matter on the tank bottom. For this, the harpacticoid copepod Tisbe biminiensis is ideal.

Tisbe biminiensis has a wide distribution across the tropical and subtropical regions. As most harpacticoids are, Tisbe biminiensis is epifaunal (that is, living on the surface of the sediment, 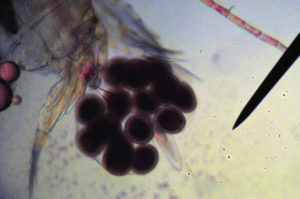 stone and macroalgae). These copepods are often found in great numbers, covering the seafloor and forming the bulk of the diets of diverse coastal marine species.

Harpacticoid copepods are known to be quite productive. In controlled culture, harpacticoids have been shown to be capable of reaching stable densities of over 40,000 individuals/liter. Researchers have determined Tisbe biminiensis to be among the most prolific of the harpacticoids. Their life cycle is rather short. They like a fairly warm environment, and their development time decreases with increasing water temperature up to 25°C (77°F). Females, which have been found in some studies to live a bit longer than males, have a lifespan of only about one month. In that short time, however, they can produce a considerable number of offspring. The first egg sack generally appears within the first 7-10 days of its life. Each new egg sack emerges around two days after the hatch of the preceding brood. A single female can produce about nine broods over the course of its life. When cultured in 500 ml vessels and fed at a rate of 50-100% copepodite biomass, its carrying capacity can be over 67,000 individuals/liter.

Because of their short generation time, high fecundity and ability to reach huge population densities, scientists have been using Tisbe biminiensis as experimental subjects in the laboratory since 1998. But in more recent years, marine aquarists have also been using the species with great success. It can thrive in very small volumes of water (e.g. aquaria). It can tolerate suboptimal water conditions and is capable of adapting to a wide variety of temperatures and salinities. As a characteristic harpacticoid, its adults live on the substrate and tank panels where it grazes on bacterial films, benthic microalgae and detritus. It has been shown in studies to be able to adapt to any stable substrate, and so can survive on any kind of tank floor (coarse crushed coral, fine sand or even bare bottoms). As it crawls over these surfaces, it is easy prey for predators of small benthic crustaceans. The early-stage nauplius form, however, is planktonic in habit and swims freely in the water column where it can be exploited by corals and many other zooplanktivorous invertebrates. The wide range of size between its naupliar and adult forms make it small enough for consumers of the tiniest zooplankton to ingest, despite reaching a large enough size to be seen, captured and eaten by many small reef fishes.

Aquarists are ever looking for the easiest to use, least expensive and most nutritious foods for the animals in their keep. Further, many look (and for good reason) for a natural, living food source that may be cultured within the display aquarium system. In these respects, Tisbe biminiensis is nothing short of ideal. Compared to conventional live foods such as brine shrimp and rotifers (which cannot be easily cultured in the main tank), Tisbe biminiensis has a very high nutritional value.

Studies suggest that Tisbe biminiensis is a good source of proteases. These enzymes, which are produced in the copepod’s midgut region, break down proteins and peptides. But proteases also appear to support the digestive systems of the creatures that feed on the copepod. This digestive boost seems to be especially important to larval organisms that exploit copepods as a first food. 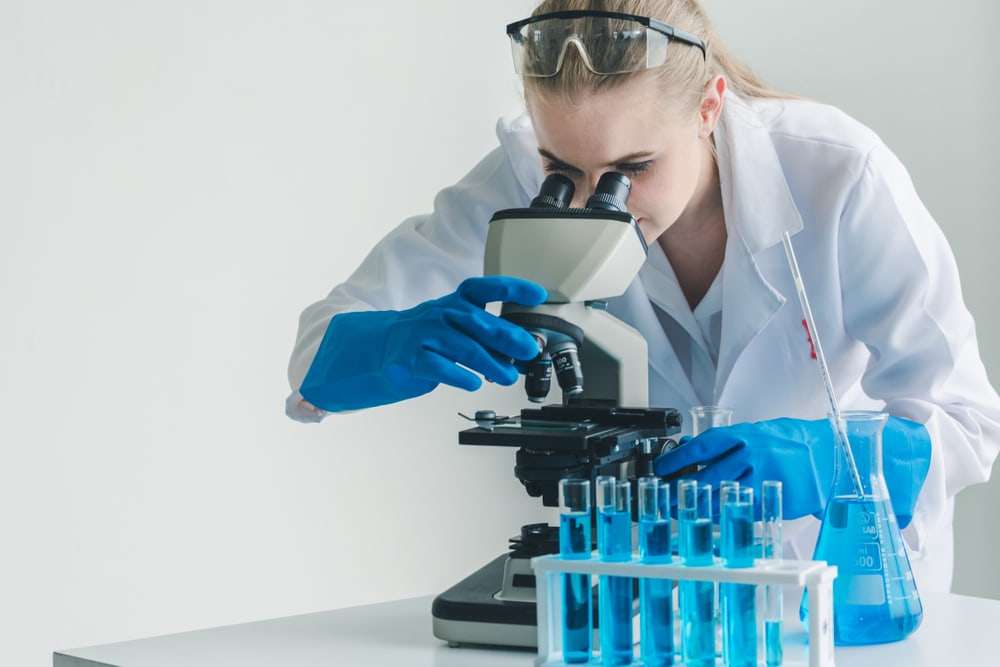 Copepods often have an excellent nutritional profile that is rich in lipids. Some harpacticoid copepods, including Tisbe biminiensis, are exceptionally rich in important lipids such as fatty acids. They tend to have relatively high levels of EFAs (essential fatty acids) as well as the longer-chain omega-3 fatty acids DHA (docosahexaenoic fatty acid) and EPA (eicosapentaenoic fatty acid). These compounds have been shown to be associated with proper growth, development, pigmentation and stress resistance. Tisbe biminiensis is exceptionally rich in EPAs and DHAs. And, they apparently are able to maintain high levels of these fatty acids in their bodies regardless of the content of their diet. It seems that they, like some other harpacticoids, possess certain enzymes that enable them to convert the foods they eat into important lipids that can be stored within their bodies. Most amazingly, they appear to be able to biosynthesize the unsaturated fatty acids DHA, EPA and ARA (arachidonic acid), which suggests that they have the necessary enzymes to bioconvert certain short-chain fatty acids. This is highly significant to the marine aquarist, as it means that these creatures can likely convert waste products within the tank—even heavily mineralized and not-so-nutritious materials like detritus—into highly nutritious compounds that accumulate in their bodies. When they are consumed by a predator, these essential compounds are then made available to the feeding animal. As such, Tisbe biminiensis (such as Tisbee Pods) may be thought of not only as major components of the aquarium clean-up crew, but as wholesome, self-renewing little food packets.

That is not to say that Tisbe biminiensis will not benefit from dietary supplementation. Even though harpacticoid copepods are very flexible in their diets, they do have certain preferences. Diet has been shown to influence both development time and lifespan. Diatoms are an important part of the diet of Tisbe biminiensis. Therefore, live phytoplankton feeds that include nutritious diatoms such as Thalassiosira (e.g. OceanMagik) can be added to maintain the largest, most productive pod population possible.

Tisbe biminiensis is clearly a highly beneficial addition to any reef aquarium. Big, stable populations of this prolific little pod can go a long way in maintaining a squeaky clean tank full of healthy, colorful fish and invertebrates.