You are here: Home / Phytoplankton / Mixed Microalgal Feeds for a Balanced Nutrition

Primary producers—those organisms (e.g. plants such as algae) that build new biomass from inorganic sources of energy—form the very base of all food chains. They are of most obvious importance to herbivores. But, of course, without producing the material upon which herbivores feed, nothing else down the chain could exist. And the dependence of carnivores upon primary producers is not always so indirect. Animals often cannot synthesize certain essential substances (which are synthesized solely by plants) in their own bodies. Thus, while herbivores may obtain them simply by eating plants, carnivores must obtain them from the gut contents of their prey.

As it forms the stuff of life itself, primary production is not only critical for the function of all natural ecosystems, but also for any healthy, dynamic captive ecosystem. Microalgae in the form of phytoplankton blends are the most important primary producers in the marine environment. The presence of  blends of phytoplankton of the right kind and amount is, in fact, absolutely necessary to maintain numerous invertebrate species (certain corals, scallops, sea cucumbers, etc.) in marine aquaria over long periods of time. The use of a properly balanced, live phytoplankton feed can surely increase one’s chance of successfully keeping phytoplanktivores. But the benefits do not stop there. Offered a supplemental diet of microalgae, many others creatures, such as zooxanthellate corals, will exhibit better growth and coloration. “Pods” (an important source of food for fishes such as mandarins, small wrasses, etc.) will be more plentiful and more nutritious. And, with this critical ecological component in place, there will be a notable suppression of nuisance algae growth.

For the woefully uninformed aquarist, all algae are bad. For the slightly more informed, there are only two kinds of algae: good and bad. Even those who recognize that there are “good” algae tend to see the beneficial phytoplanktonic forms simply as they do with their naked eyes: as either green or brown. In truth, there are many thousands of microalgal species, with each differing in terms of size, physical appearance, behavior, life cycle, and so on. What the marine aquarist should be most concerned with, however, is how the many phytoplankton foods available to them differ in their nutritional value.

The nutritional profiles of microalgal feeds can vary somewhat depending upon culture conditions; such factors might include light conditions, temperature, population densities or type of fertilizer used. However, the nutritional value of these foods is most closely and predictably related to species.

Overall, most phytoplankton blends are quite nutritious. Nevertheless, while they are generally high in many essential nutrients, individual species are often deficient in one or another. For this reason, use of a single species is rarely best; even some mixed feeds may not be sufficiently balanced. The best mixed feeds (such as OceanMagik) use a carefully selected combination of species to compensate for these deficiencies. Mixes of chlorophytes (the green algae) and chrysophytes (the diatoms and golden brown algae) certainly go a long way in meeting this goal, but it goes little further than that.

One study (Brown et al, 1997), in comparing 40 different species of microalgae that are of use in aquacultural applications, found that microalgal feeds differ significantly in their nutritional profiles. Some, for example, are rich in important lipids but lacking in protein, while others may have low levels of lipids and a high protein content. The gross composition of few, if any, species is sufficient to supply all three of these basic components in the right amount.

Microalgae differ most conspicuously with respect to carbohydrate c 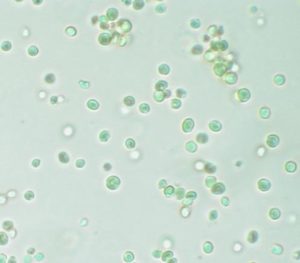 ontent. It is indeed the great variability of sugar content that makes differences in food value between species so pronounced. Species used in the study varied in carbohydrate content from 5-23% dry weight. Chlorophytes (e.g. Tetraselmis) tend to have the highest carbohydrate content. Glucose is usually the richest of simple carbohydrates, at 21-87% of the sugar content. This is really good, as the monosaccharide glucose is highly digestible. Some microalgae may also be rich in polysaccharides such as galactose and mannose (1-20% and 2-46% of sugar content, respectively), though these particular carbohydrates are not always as easy for the feeding animal to digest.

Lipid content was likewise found to vary much between species—by 7-23% dry weight. Certain lipids, such as polyunsaturated fatty acids (PUFAs), are essential components of most animals’ diets. Though chlorophytes are an excellent source of carbohydrates, they are relatively low in PUFA content. So, this is where the chrysophytes (e.g. Nannochloropsis, Isochrysis, Thallasiosira phytoplankton blend) step in. Diatoms are an especially good source of lipids, and are particularly rich in PUFAs (5-35% of the total fatty acid content).

Most microalgae are high in protein. Still, even here there is significant variance between the investigated species, ranging from 6-52% dry weight content. For proper animal growth, a food must have a protein content that is somewhere near that of the feeding animal. Any good feed will therefore include a high-protein algae such as Tetraselmus. Luckily, the majority microalgae are also rich in amino acids, which are the building blocks of proteins. Most species contain plenty of aspartate and glutamate. Other important amino acids such as arginine, for example, can be supplied by including certain arginine-rich algae such as Tetraselmus.

Different species of microalgae vary in vitamin content. Some species can be quite high in important vitamins such as Vitamin C (1-16 micrograms/gram dry weight) and riboflavin (20-40 micrograms/gram dry weight). Though Vitamin C is required in only small quantities by cultured animals (0.03-0.2 micrograms/liter), it is absolutely essential. Live phytoplankton do vary a bit in Vitamin C content, but are usually so rich in it that most species will be more than sufficient in meeting the needs of a phytoplanktivore. Still, the highest Vitamin C content might be required to meet the dietary needs of zooplanktivores (e.g. seahorses) when supplied through the gut-loading of a phytoplanktivorous prey item such as copepods. It is therefore best to include a species such as Nannochloropsis that is particularly rich in Vitamin C. Though Isochrysis has only half the Vitamin C content of Nannochloropsis, it is among the richest in terms of riboflavin content (40 micrograms/gram dry weight) and should be included as to provide this vital compound.

OceanMagik™ is a high-quality, nutritionally balanced live phytoplankton blend that incorporates four complimentary microalgae: Nannochloropsis, Tetraselmus, Isochrysis and Thallasiosira. Together, these algae not only supply a well-rounded diet for diverse aquarium animals, but present a wide cell size range to suit a large variety of highly selective filter-feeders. Best of all, it comes as “prepared” as a good live feed ever could: no multi-species phytoplankton recipes to measure and mix!