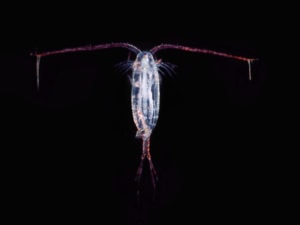 Put simply, copepods are everywhere, and there are all kinds of them. We’re talking about somewhere from seven or eight thousand to over 20,000 species. They may be found from the deep sea to the middle of rainforests. But of the massive group’s eight orders, three copepod groups dominate in terms of number of species and sheer biomass. These are (1) the calanoids, (2) the harpacticoids and (3) the cyclopoids. Most often, members of these groups are found within the shallow, sunlit photic zone, where they graze heavily on phytoplankton. They are in turn preyed upon by all sorts of creatures ranging from tiny fishes to whales. As such, they form an important link in most freshwater and marine ecosystems.

Being a natural (and in many cases vital) food source for varied organisms, it is not surprising that they are cultured for use in the aquarium and aquaculture industries. Species representing each of these three groups have been utilized successfully for this purpose. And, certainly many more are being experimented with right now. Given that there are so many copepod species, that they differ so much from each other, and that there are so many potential uses for them in aquaria, there simply isn’t one perfect aquarium copepod. Factors such as size (both young and adult), ease of culture, nutritional profile, etc. will play a major role in selecting a single species for a single purpose (e.g. as a first food for larval fish). A smart combination of species may be used for more general purposes (e.g. as part of a clean-up crew in community marine aquaria). Undoubtedly, a big part of making a good selection of copepod(s) is understanding those things that set them apart at the level of order and individual species.

Being Part of a Copepod Group

Particularly for such a diverse group, it is important to point out those characteristics that are shared by all in the subclass Copepoda before discussing their dissimilarities. One obvious commonality is their small size; with the largest not exceeding an inch and most being pretty much microscopic, they are the smallest of the crustacea. Their bodies are segmented into a simple head, thorax and abdomen. The thorax and abdomen form a 10-segmented trunk. The head and thorax may be fused into a single structure known as a cephalothorax. They are mostly short and cylindrical in shape with a narrow abdomen, oar-like swimming feet and spiny extensions of the abdomen (or furca). Their narrow abdomen, however, lacks distinct appendages. Generally, the head and thorax have six sets of appendages, including two pairs of antennae, a pair of mandibles, two pairs of maxillae and a pair of maxillipeds. The first pair of antennae serve as sensory organs, whereas the second are usually used for grasping. Females carry eggs on one or two sacs on the ventral side of the body. The young undergo numerous metamorphoses before reaching adulthood, typically including six naupliar and five copepodid stages.
Members of all of the three major copepods groups can be found in both freshwater and saltwater environments. They typically live in surface waters, where they make up as much as 95% of the zooplankton. By most accounts, the distribution of copepods is influenced primarily by water temperature. Most free-living species feed opportunistically on detritus and bacteria, but often rely heavily upon phytoplankton. As the availability of phytoplankton can change significantly between seasons, the abundance of copepods too will change throughout the year in a given locale. Factors such as temperature and diet can be carefully controlled in aquaria as to maintain a large and stable population over lengthy periods of time. Picking the right pod(s) for the job is the first step in ensuring a successful inoculation and the greatest overall health benefits.

The mainly barrel-shaped, herbivorous calanoids are the most abundant copepod group in the marine environment. There are likely more calanoid copepods in the ocean (by weight) than of any other planktonic animal group. Calanoids most often live an entirely planktonic existence. Of the three major copepod groups, the calanoids are the largest in physical size. As most calanoid species live an entirely pelagic life, they are frequently used as a high-quality feed for larval and juvenile fish. They also swim with a jerky movement that is attractive to young fishes. Species with smaller naupliar size ranges are best for this purpose, as the tiniest larvae with the tiniest mouths will be able to ingest them. Their mainly pelagic habits also make calanoids interesting for their potential as live feed for numerous suspension-feeding zooplanktivores. Calanoids are widely regarded to be the most difficult of three major groups to culture in appreciable numbers.

Compared to the other groups, harpacticoid copepods have an elongate body shape. Though pelagic in habit as larvae, harpacticoid copepods settle onto the substrate and assume a benthic lifestyle as adults. They are heavily detritivorous, but will happily feast on any microalgal films they may encounter. Harpacticoids are an important part of sand and mud communities, where they are preyed on by everything from hydroids to small fishes such as mandarins. They are quite hardy, are the most amenable to aquarium conditions, and so are the most likely of the three groups to establish breeding populations in a captive environment. Though not used as often as the calanoids for larviculture, feeding trials using the harpacticoid Tigriopus have been encouraging. 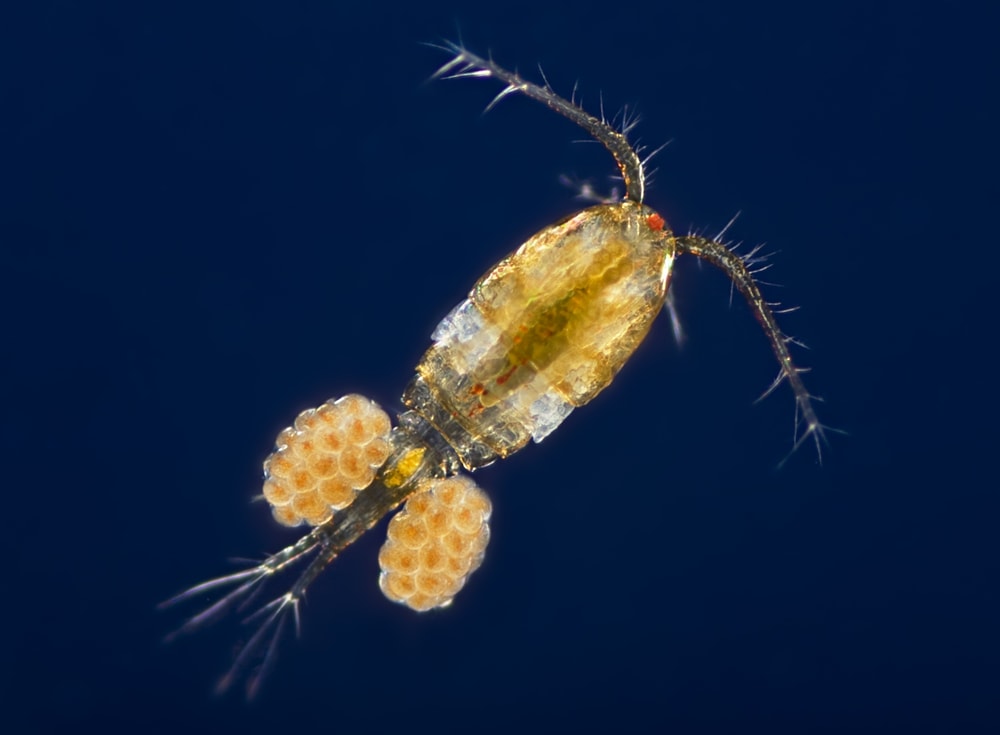 Aside from a pear-shaped body that ends in a strongly forked tail, cyclopoid copepods are distinguished by their very large and well-developed first antennae. They are true omnivores, devouring anything from fine particulate organic matter to bacterioplankton from the water column. Cyclopoids tend to inhabit closed or semi-enclosed bodies of water, where they have developed several adaptations to tolerate drought and freezing conditions, making them quite resilient. They may be found in freshwater as often as in saltwater (some species can live in both). Most are completely pelagic, though benthic forms do exist. They tend to be on the smaller side. But, what they lack in physical size, they make up for in terms of productivity. Females can produce 13 pairs of egg sacs (each bearing about 50 eggs) over the course of a lifetime, generating scores and scores of offspring.

Three Aquarium Species: Comparing Copepod Groups Between and Within Orders

Here we can briefly discuss some notable differences among the groups by comparing and contrasting (in ascending order of size) three important aquarium species: Tisbe biminiensis, Cyclops panamensis and Tigriopus californicus.
Tisbe biminiensis is fairly small at size of 50-1000 µm. This makes it appropriate for young or small-sized bottom-dwelling fishes. As a harpacticoid, adults spend more of their time on the substrate where their predators can find them. It has a fairly high reproductive rate of around 28,000 nauplii and copepodites per liter per day. Their small larvae are particularly useful as a nutritious food for filter-feeding invertebrates. Tisbe pods feed on detritus and nuisance algae, playing an important role in aquarium cleanliness.
As a cyclopoid, Apocyclops panamensis differs from the harpacticoids Tisbe and Tigriopus in that it is neither entirely pelagic nor benthic throughout its entire life cycle. Due to its adaptations to unstable environments, it is relatively hardy and productive. Under ideal conditions, Apocyclops pods can reach densities as high as 20,000-30,000 individuals per liter in as little as 4-6 days. As such, it might be ideal for certain larviculture applications, as well as for adding more bulk and nutritional/prey size diversity to the diet of filter-feeders. It is rich in important dietary compounds such as proteins, free amino acids and highly unsaturated fatty acids. Its adults also an excellent food for zooplanktivorous fishes such as seahorses small wrasses.
Though the Tigriopus californicus may take a bit longer to establish itself due to its pelagic tendancies, it can be exceptionally productive. Its larvae are similarly useful to filter-feeders. However, it differs in that it is quite large at a size of 250-1700 µm and is therefore more conspicuous to predators, whereas the smaller Tisbe can more easily escape their attention. Also, Tigripous has a habit of skipping into the water column where it can be more easily be seen and picked off by planktivores such as small wrasses. Thus, Tigriopus tends not to dominate Tisbe when used together in community aquaria. Tigriopus pods also rich in astaxanthin, which enhances the natural coloration of both fish and invertebrates.

Clearly, not all copepods (even of the same order) are the same. It is therefore ideal (especially in a reef aquarium, which contains a wide variety of organisms from all over the world) to use a balanced mix of pod species. This will add enough diversity in terms of size, behavior and nutrition to suit the needs of most aquarium livestock.
Luckily, such mixes are available to discerning aquarists everywhere. For example, 5280 Pods contains a mix of live Tisbe, Apocyclops and Tigriopus in a single package that may be added directly to your main tank or refugium. While premium live products such as Poseidon’s Feast (which exclusively contains harpacticoids) may be highly effective for cleaning the substrate and aquarium panels, the inclusion of Apocyclops adds significantly to the overall health of filter-feeding animals such as many corals, clams, sea cucumbers, etc. These are the only such high-end products that include a mix of species in juvenile to adult sizes, making them immediately of use to a large variety of creatures and all but guaranteeing successfully established in-tank populations. If very large pod populations are desired for maximum nutritional and tank cleaning benefits, these products can be utilized just as easily for routine replenishment. The regular addition of quality algal mixes such as Ocean Magik will also help to maintain large pod populations as well as enrich their nutritional content. However used, the mere presence of a diverse mix from multiple copepod groups is a fail-proof and low-cost means of promoting the health, beauty and natural ecology of any marine aquarium system.