You are here: Home / Copepods / A Closer Look at the Harpacticoid Copepod Tigriopus californicus 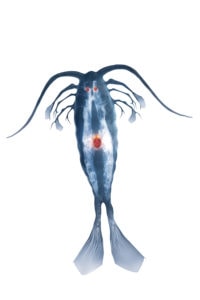 The supralittoral zone—the area comprising the uppermost reaches of the intertidal zone—is not a particularly easy place for marine life to live. The small tide pools to be found in this marginal environment exchange water with the nearby sea only during storms or during the highest tides. Most exchange (where there is any appreciable amount to speak of) comes from splash as waves strike the rocky shoreline below. These little isolated pockets of seawater are thus subject to considerable swings of temperature, salinity, pH and even dissolved oxygen levels. As a consequence, very few higher life forms can inhabit these parts. However, those that can and do (i.e. those that can withstand the harsh conditions) are rewarded with a living space that is almost entirely free of predators.

The harpacticoid copepod genus Tigriopus includes seven species that may be found in certain high-shore environments worldwide. Tigriopus californicus is a well-known (and well-studied) example of the group. T. californicus is a common inhabitant of supralittoral tide pools from Baja California, Mexico, to southeast Alaska. High-shore environments throughout this range are no easier to subsist in than any other. And T. californicus (often referred to as tig pods) can thrive in them. Due to its great abundance, the species has been referred to as “the insect of the sea.” In one study conducted on Vancouver Island, researchers recorded population densities in predator-free pools to be as high as 20,000 individuals per liter. The species is capable of shrugging off water temperatures from less than 50°F (10°C) to over 104°F (40°C); it can withstand temperature fluctuations of over 18 degrees F (10 degrees C) in the course of a single day. It remains active in salinities ranging from 6-102 ppt (1.0045- 1.0784 S.G.); inactive adults and eggs taken from waters with salinities as high as 334 ppt (1.2827 S.G.) have been successfully revived. Clearly, T. californicus is among the hardiest and most adaptable of all known marine invertebrates.

Owing to these remarkable adaptations, tig pods are of great use to aquarists. Not only do these resilient creatures ship and store well, but they are also quite amenable to typical (or even poor) aquarium conditions. Practically any type of marine aquarium is capable of supporting long lasting populations of the species. Highly effective scavengers, tig pods can survive (indeed thrive) by feeding upon deposits of detritus and films of benthic nuisance algae—much to the pleasure of the aquarist that keeps them. The extent of their contribution to a tank’s “clean-up crew” depends primarily upon the population density. Though each female will bear hundreds of eggs during its life cycle, the size of the population may fluctuate. Ultimately, the density may reach carrying capacity (i.e. the greatest number possible given a certain amount of space and food) or may slowly dwindle to near nothing. This will be dependent upon (1) the reproductive rate of the residing population as well as (2) the rate at which they are preyed upon by fishes and invertebrates within the aquarium system. The use of a refugium may certainly help to increase and stabilize the population of these pods (as with any pod) over time. That being said, oftentimes the best way to ensure that the highest degree of tank cleaning is achieved is to replenish their numbers from time to time. This most certainly will not be because they cannot survive or reproduce in the aquarium environment, but rather because of one much better reason (at least as far as the zooplanktivorous aquarium inhabitants are concerned): heavy predation.

Despite the fact that they are well equipped to handle tough physical and chemical environments (or, perhaps, because of it), they are ill prepared to evade predators. They almost seem to beg to 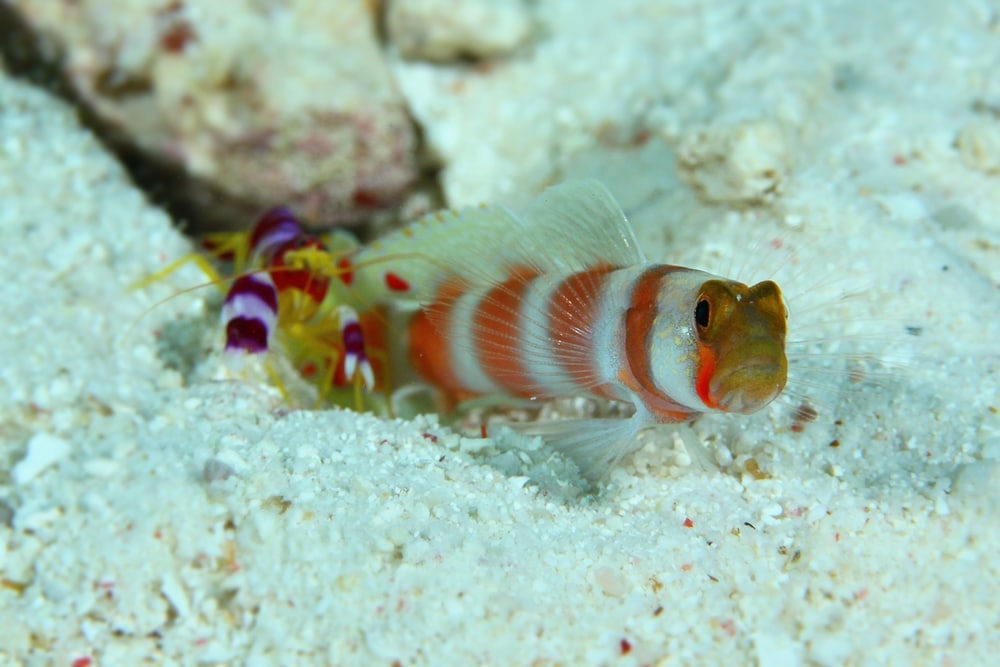 be eaten. Like most harpacticoid copepods, Tigriopus californicus lives a benthic lifestyle (i.e. crawls over the substrate and rock surfaces) as adults. This puts them within easy reach of the minute jaws of a mandarin goby or scooter blenny. They are also extremely conspicuous. Not only are the adults rather large for a harpacticoid copepod (sometimes reaching a whopping length of three millimeters), but they also are typically bright red in color. Making them even easier to spot, they have a habit of jumping into the water column and performing a jerky dance. These tantalizing swimming motions elicit the feeding response of even the pickiest eaters such as seahorses and pipefishes. Their tiny larvae, which are pelagic (i.e. swim about in the water column), are similarly attractive to and accepted by filter-feeding invertebrates such as corals, tube worms, tunicates, etc.

Even compared to other copepods, tig pods are a superfood. Loaded with Omega-3 fatty acids (e.g. EPA and DHA) and free amino acids (e.g. alanine and proline), they are exceedingly nutritious. Even the chitin that makes up their exoskeleton, which is more or less indigestible, may be an important source of roughage needed for the digestive health of fishes and other animals. And their deep reddish pigmentation? That comes from a rich carotenoid content (e.g. astaxanthin), which is proven to directly and significantly enhance the coloration of the animals that feed on them.

It should be noted that many of these important dietary nutrients are absent or quickly degrade in a lot of prepared fish foods. Prepared foods are nominally used out of convenience—but what can be more convenient than having a source of food living within the aquarium that continuously replaces itself? Additionally, as a live and ever-present food source, tig pods are available to their predators all day and all night long. This is important, as most grazing fishes and filter-feeding invertebrates are not adapted to handling a large meal once or twice daily (as is the usual feeding schedule for most marine tanks). Some of these animals are not even in feeding mode at all during regular feedings (e.g. after dark).

Clearly, when maintained in sufficient abundance, the mere presence of tig pods can tip the balance in favor of survival for numerous delicate aquarium species. Considering the ease with which they may be added to and maintained within the aquarium system, that is a pretty big plus!