You are here: Home / Captive Bred Fish / Keeping and Feeding the Mandarin Fishes 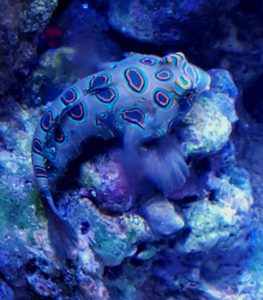 Mandarins are undoubtedly among the most popular of all marine aquarium fishes. Conspicuous for their small size, they have an endearing habit of demurely hopping over the aquarium bottom. They have rather long, elegant fins. But, arguably, their most striking feature is their gorgeous body coloration and patterns. These attributes make them downright irresistible to many aquarists. Indeed, they are in very high demand in the ornamental fish trade. This demand has never wavered, despite one critical aspect of their captive care—they have very specific and important feeding requirements to be met.

Mandarin dragonets belong to the family Callionymidae (they are neither gobies nor blennies, as some of their common names would suggest). This group, oftentimes referred to as the dragonets, claims about 187 species placed in about 15 genera. The green mandarin (Synchiropus splendidus) and the spotted mandarin (Synchiropus picturatus), by far the most desired dragonets in the trade, represent only a couple of the approximately 40 species in the genus. Both occur in shallow (1-18 meters depth), protected, silty, rubble-strewn, reef-associated lagoons across the Indian and western Pacific Oceans from the Philippines to Australia. They are somewhat crepuscular in habit, concentrating their feeding activities in the dawn hours and their breeding activities in the evening hours.

However, like all of their dragonet cousins, the green mandarin and spotted mandarin are both considered to be “browsers” that more or less feed throughout the entire day. Their constant foraging is a necessity, as the bulk of their diet is comprised of smallish crustaceans. While gut analyses of wild specimens have revealed that they prey on a fairly wide variety of critters ranging from gammaridean amphipods to baby snails, they are primarily dependent upon harpacticoid copepods. Their relatively short digestive tracts are built to efficiently absorb fatty acids from their prey. Because their prey is so tiny, they must consume a lot of them to meet their dietary needs. For this reason, each individual mandarin will roam over a home range of several square meters.

One might wonder how such a small, slow, colorful fish could forage openly, all day, without immediately getting picked off by a predator. Mandarins exude a very thick slime coat that is full of bitter, noxious compounds. This makes them utterly unpalatable to would-be predators. And those vivid colors and unmistakable patterns? They are believed to be aposematic; that is, they serve as an explicit warning to those animals that might dare to even consider eating them.

Unfortunately, these very same bright colors that so effectively deter predators so often attract the attention of unprepared fish keepers. It really is a shame that so many of these beautiful creatures die unnecessarily in captivity from starvation. Too many wild-caught specimens, after having been shipped (and usually poorly handled) all of the way from Southeast Asia, are swimming dead upon arrival. Those that have been captured with mini spear guns (as is reportedly common) arrive in an especially compromised condition. This is really bad, as their fat reserves have almost certainly been depleted in transit. Thin or even sunken-in bodies are evident of this neglect. Malnourished to this extent, a mandarin will seldom survive its transition to a captive lifestyle. As sad as it may sound, one should not purchase a specimen in this condition with the hope of saving it, as the likelihood of a recovery is all too slim. One might take it home, and shower it with pods, and it might eat them, but the damage has been done; this animal is a lost cause and is almost sure to weaken and die within days.

Now for the good news. Mandarins can be successfully maintained in aquaria. This success is dependent upon two things.

Firstly, a healthy specimen must be obtained. Any healthy individual will appear to be confident and alert. Its body will not show any evidence of injury, however slight. Its fins will not be shredded. It will not have excessive amounts of mucus covering its body, fins or eyes. And, above all, it will be plump and actively foraging in its holding tank. Select only well-conditioned wild specimens or, better yet, tank-bred specimens.

Secondly, the aquarium must be ready to accommodate the animal. Obviously, part of this involves creating the right physical environment. In this respect, it should be remembered where mandarins come from: relatively calm, sheltered waters. Kept in an SPS-dominated system (i.e. where there is brisk water movement), a mandarin will waste precious energy and its foraging activities will be disrupted as it struggles in the strong currents. Mandarins are better kept in aquaria with moderate water flow rates (e.g. LPS-dominated systems) or where flow is minimal such as tanks containing seahorses and pipefishes. A sandy bottom with lots of rubble will provide the best aquascape. And, even though mandarins are small and slow, their feeding behavior requires that they have plenty of space, so provide a tank size of at least 30 gallons per specimen. Some aquarium shop salespeople might try to impress you (and earn a sale) by demonstrating that a particular mandarin will eat dead foods such as frozen mysis shrimp. And that’s just great; these foods might supplement its diet well. But even a specimen such as this will need to constantly browse to fulfill it dietary requirements. A truly constant supply of food can be provided only with a healthy population of live food items. Thus, it is imperative that the system has a large, well-established population of pods before introducing a mandarin to the tank. This can be accomplished simply by seeding the aquarium with an appropriate pod culture. To ensure the best nutrition, coloration and feeding opportunities for your mandarin, seed the aquarium with a multi-species population of harpacticoid copepods. For this, a generous amount of Poseidon’s Feast (which contains the harpacticoid copepods Tigriopus californicus and Tisbe biminiensis) will be ideal. The use of a refugium may help to maintain stable pod densities. However, even with a fully productive refugium in place, it may be necessary from time to time to beef up the pod population as it is diminished through predation by the mandarin and other hungry creatures in the tank.

In truth, mandarins can be extremely easy to keep. Under the right conditions, the species will even breed readily in aquaria. Properly selected, housed and fed, these beautiful and fascinating fishes can reward the aquarium hobbyist with relatively trouble-free enjoyment for years.