You are here: Home / Copepods / Exoskeletons, Roughage and Digestive Health

Unlike marine animals, who use chitin, we humans, and most other terrestrial animals, benefit greatly from dietary fiber. Consisting of tiny bits of virtually indigestible plant matter (structural polysaccharides of glucose monomers such as cellulose, lignin, etc.), fiber serves primarily to help “move things along” as well as scour our intestines clean. Without this roughage to help move and eliminate waste, we would truly be in a world of hurt.

Many aquatic animals similarly need roughage in their diet. Roughage assists in the healthful functioning of the digestive systems of diverse aquatic species, including fishes. However, because aquatic plants and algae contain far less fiber (they do not require nearly as much structural support as terrestrial plants), aquatic animals must obtain roughage from other sources. This is usually in the form of chitin.

Like plant fiber, chitin is a poorly-digestible, extracellular structural polysaccharide (in this case, an amino sugar); unlike fiber, chitin is obtained from non-plant sources. This material is physically resilient and is insoluble in water, alkalis and weak acids. Thus, chitin not only provides physical protection, but it also protects against dehydration. Pure chitin is somewhat soft and leathery; it becomes quite rigid, however, when it is impregnated with calcium salts. Chitin owes its overall toughness to its stubborn insolubility in water.

Chitin is produced by many fungi and is a main component in the exoskeleton of all arthropods. The body covering (i.e. exoskeleton) of crustacean arthropods contains up to twice as much chitin as that of insects. While the digestive systems of many (principally insectivorous) terrestrial animals contain an abundance of chitin-eating gut flora, marine fishes and invertebrates (which feed principally on crustaceans) are lacking in these microbes. Thus, most of the chitin consumed by a marine animal is passed through the digestive tract as roughage. Crustaceans indeed provide the majority of chitinous roughage in the marine environment. Of these, copepods are certainly among the most important; they are a key trophic (i.e. food chain) link between primary and secondary production and oftentimes are the most abundant organism in the zooplankton in terms of biomass. They are, in fact, one of the most numerous of all animal groups. And, they contain plenty of chitin.

The chitin content of a particular live diet can vary somewhat with differences of species, developmental stage, diet and environmental conditions. Amphipods, for example, can provide a significant amount of roughage; most have a rough composition of around 3% ash, 45% protein, 0.51% fat, 0.50% digestible carbohydrate, 0.53% fiber (from gut contents) and 7.3% chitin.

These differences can have an effect of the feeding animal. It can be important to get the chitin contribution to the animal’s diet just right. Content should not exceed that which is needed for optimal digestive function; having to pass any more roughage than this is energetically wasteful for the animal. Excessive dietary chitin has also been implicated as a cause of excessively tough egg casings in fish, which reduces successful hatch rates. Therefore, researchers, hatchery technicians and other serious aquarists may have good reason to be able to determine a fairly precise chitin content in their own live feeds.

One such method, provided by Raymont et al (1964), can yield satisfactory results using few materials. A weighed sample of whole, wet crustacean live feed is boiled in a glass test tube filled with 50% solution of NaOH for two hours. It is then left to cool and sit overnight. The next day the animals’ soft tissues will have been digested, with only the chitinous exoskeleton left behind. These remnants are then rinsed with distilled water. At this point, some may wish to confirm (using certain reagents) the total absence of protein from the sample. Next, the exoskeletons are washed with a weak solution of HCl and then rinsed again with distilled water. The material is dried in a tared crucible for 24 hours at 60°C. It is weighed; the weight of this dried material is assumed to be only that of chitin and ash. Heat the dried material to 500°C. Re-weight the sample; the weight of the chitin is calculated as the loss of weight due to ashing.

Exoskeletons are, above all else, armor. They may be quite heavy. Only between body segments and appendage joints are exoskeletons light and flexible (smaller crustaceans such as copepods can exchange gases and excrete wastes through these thin spots). They may, in many cases, be impregnated with calcium carbonate and/or certain proteins to increase their strength and rigidity. They are further strengthened by a covering of a hard laminate material. Generally, exoskeletons become proportionally heavier with increasing animal size. This factor tends to place limits on the maximum size of a crustacean species. As a consequence, small crustaceans such as copepods, which are heavily armored (at least proportionally), rarely exceed a few millimeters in size. So, while rich in many important nutrients (e.g. fatty acids), microcrustaceans are also an excellent source of chitinous roughage. 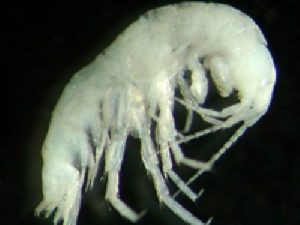 Because the crustacean exoskeleton itself cannot grow, it must be cast off and replaced as the animal outgrows it. This process, referred to as molting (or ecdysis), occurs multiple times throughout the animal’s lifecycle. Copepods, for example, characteristically undergo ecdysis about a dozen times in the course of one life cycle. Crustaceans therefore generate a substantial amount of organic detritus. Aside from serving as indigestible roughage for some feeding organisms, discarded exoskeletons can be broken down (provided that they possess the requisite enzymes) by certain microorganisms. This form of chitin can be a great source of nourishment, as well as roughage, for many scavengers (e.g. crabs), as it is usually covered with nutritious bacteria and protozoans.

Because it is digested mainly by microbes, chitin (whether consumed and excreted by a predator or cast off during a molt) moves backwards along the food chain. Considering the great abundance of this material in the marine environment, it plays a significant role in nutrient cycling. As such, a healthy captive population of microcrustaceans can not only promote the digestive health of some aquarium animals, but can also help to create an altogether more dynamic, stable and natural aquarium environment.