You are here: Home / Copepods / The Hardy Copepod

The ocean is not always a hospitable place to be for an animal. This is especially so in the shallows, where unstable temperatures, extreme shifts of water chemistry and powerful wave action are commonplace. This is, however, where algae must be, as it is in shallow waters that sunlight is intense enough for photosynthesis to take place. And, where the algae is, so must the copepod be.

Copepods are well adapted to thrive in these sometimes harsh environments. It is their sturdiness and adaptability that makes them so well suited to survive in captivity. Let’s face it: regardless of any amount of time, money or sweat that we pour into our reef tanks, they are fairly unstable environments. Even the best maintained systems are subject to as much, or more, instability than some of the most stable shallow-water marine habitats. Within inches, water velocity may range from stagnant to violent. Salinity rises and falls between top-off. Temperatures may wander between seasons or even between day and night. Nutrient levels may rise and fall with every overfeeding or water change. Various occurrences may even lead to dangerous spikes of ammonia. And worse yet, critical parameters such as dissolved oxygen levels may deteriorate during power outages and other major mishaps.

Every organism has its own set of tolerance limits, of course, and can only take so much abuse. But shallow-water copepods such as Tisbe, Tigriopus and Apocyclops have proven time and again to be capable of withstanding considerable punishment. It seems that we aquarists underestimate (when not taking for granted) the amount of stress that copepods can handle. 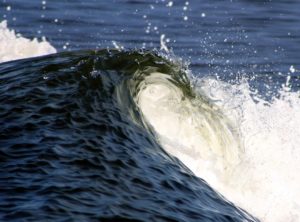 Take for example concerns about their ability to pass through aquarium pumps unharmed. It is a reasonable concern, considering what actually occurs as they pass through the churning impeller of a powerful centrifugal pump. Indeed, studies have shown that brine shrimp, which are adapted to much calmer waters, have a mortality rate of as much as 90% in this situation. Experts, however, concede that many reef-associated zooplankton (certainly including copepods) can largely withstand the pressure and turbulence generated within these pumps, and that concerns about pump-related injuries to these creatures is unwarranted. Of course, a small number of individuals might receive injuries in this manner, but it is probably similar in number to those injuries sustained by wave action in the crash zones of real reefs.

Copepods are similarly resistant to thermal and chemical stress. Regarded by some scientists as among the most resilient animals in the sea, Tigriopus exemplifies this well. Found living mainly in small, isolated pools of water on the high shore, Tigriopus is adapted to tolerate extraordinarily rapid and extreme shifts of temperature and salinity (see A Closer Look at the Harpacticoid Copepod Tigriopus californicus). Even while able to overwinter in waters that may dip below 10°C (50°F), it can also survive under the summer sunshine in water temperatures that exceed 40°C (104°F). Owing to the wild fluctuation of salt content that occurs in these small pools with evaporation and rainfall, these tough little pods are also adapted to remain alive and active in waters with salinities ranging from 6-102 ppt (1.0045-107.84 S.G.). Even more impressive is that inactive individuals have been revived after being in waters with salinities as high as 334 ppt (1.2827 S.G.).

The free-living cyclopoid Apocyclops is found in ponds, marshes and estuaries. This euryhaline copepod, like Tigriopus, can subsist in a wide range of salinities (albeit at the lower extreme); it can tolerate anything from freshwater to full seawater (see A Closer Look at the Cyclopoid Copepod Apocyclops panamensis). Moreover, it can tolerate heavily polluted waters, where a large part of its diet may consist of particulate organic matter. Even in foul waters, it can be found crowded in high densities (over 5,800 individuals per liter).

The harpacticoid copepod Tisbe lives out its adult life stage on the bottom. Like Apocyclops, Tisbe can survive off of poor diets such as particulate wastes. But it is even more amazing in that it has the capability of bioconverting any settled organic matter it can find and eat into highly nutritious lipids that it may store in its body (see A Closer Look at the Harpacticoid Copepod Tisbe biminiensis). Moreover, it can endure some of the poor water conditions that might be encountered in captive systems. In fact, on the basis to their ability to survive in toxic environments, scientists have even been touting them for use as bioassay organisms for sediment toxicological assessments. They certainly can withstand some of the toxic compounds that can accumulate in aquaria. For example, in one study, a No Observed Effect Concentration (NOEC) from ammonia of about 0.106 mg NH3-N per liter (3.34 mg NH4-N per liter) was observed for several life stages of Tisbe—a concentration that can easily cause noticeable distress to many other aquarium species.

For sure, copepods may be tough, but they are not invincible. Mechanical filters and sterilization units, for example, can spell the end for an otherwise healthy pod. Of course, if copepods are present in an aquarium in sufficient numbers, the use of filter pads and UV sterilizers may not even be necessary; these creatures are excellent scavengers of detritus and nuisance algae. If one hopes to maintain large populations of copepods where these types are filter devices are in use, it is best to install a refugium. The refugium should be installed either at the end of, or independent of, the filtration devices. Refugia that are planted with macroalgae are ideal (see Going Green: Installing and Operating a Planted Refugium), as they provide greatly increased surface area (i.e. habitable space) on which to live as well as trap particulate matter (i.e. food). In the refugium, the pods are afforded an excellent sanctuary in which to grow and reproduce, free from the perils of the aquarium filtration system.

Considering their exceptional hardiness, it is little wonder why copepods are so easy to use as clean-up crews and live food. Not only do they ship well, but they also can handle the rigors of living in our reef aquaria, on the good days and even on the worst.

[4] Cano, Roberto, Scarleth Ráudez and Evelyn Hooker. “The Natural Diet of Apocyclops panamensis at a Shrimp Farm on the Pacific Coast of Nicaragua.” Zoological Studies 43(2): 344-349, 2004.