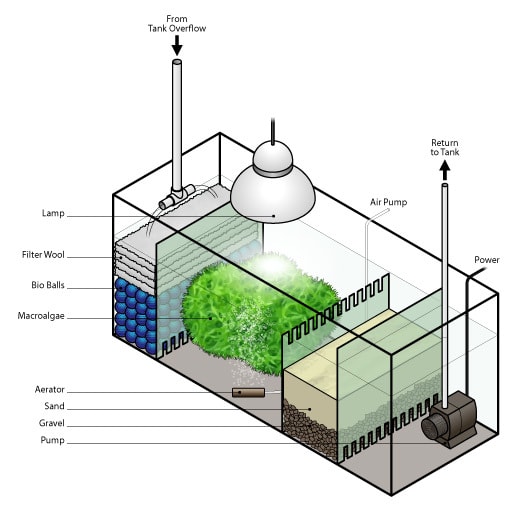 Many aquarists strive to build and maintain aquarium systems that replicate, as faithfully as possible, the natural environments from which their collection of animals originates. This is certainly not without some considerable reward, as doing so not only results in a more interesting captive ecosystem, but also promotes these creatures’ health, fecundity and natural behavior. One of the best ways of doing this in a marine reef aquarium is through the use of a refugium sump.

One of the most challenging aspects of keeping marine aquaria is maintaining a hospitable living environment for all of the livestock—particularly with respect to water chemistry. And, of course, keeping a consistently high water quality should be a primary concern. While this absolutely can be accomplished with a heavy reliance on complicated and expensive filtration devices and specialized chemical filter media (often in addition to regular, massive water changes), a more naturalistic approach utilizes (surprise!) decidedly more natural means. Chief among them are planted refugia.

Everyone loves fish, and we especially love to feed them. Even when, in the mid-1980’s as reef aquarium systems (which are nominally dominated by reef-building corals) were starting to become commonplace, hobbyists’ tanks were loaded with fish. The problems associated with this arrangement in closed aquarium systems quickly became apparent; the combination of high fish waste output and the necessarily intense reef tank lighting all too frequently resulted in massive nuisance algal blooms. In the best cases these algae compromised the appearance of the aquarium display, and in the worst smothered corals and other sessile invertebrates to their death.

Excess nitrate and phosphate were quickly identified as the culprits. In the following years and decades, many products (including both devices and chemical filtrants) were continuously developed to combat these threats. But, as anyone who worked in the industry throughout this period could tell you, these cure-alls were anything but. Surely, improvements upon these technologies have been made. But a much more naturalistic method of nutrient management that employs a sump refugium has produced favorable results for countless aquarists at both the hobbyist and professional levels.

In short, a refugium is a separate sump (or in some cases a section within a sump). These microhabitats serve as a sort of refuge, if you will, for certain beneficial small animals that would otherwise be quickly decimated by hungry fish within the main tank. Most often, the organisms targeted to reside in refugia are microcrustaceans such as amphipods and copepods. In theory, these tiny creatures are afforded a safe haven in which they can develop and maintain large, stable and productive populations. Oftentimes, refugia are designed in a way that actually captures unwanted particulate organic matter (POM) where it can be efficiently captured and consumed by the resident “pods.”

An early take on this method (and indeed one still in popular use today) includes the use of macroalgae. These algae provide additional valuable food and habitable surface space for the pods, greatly increasing their potential population size, as well as sequestering nutrients from the aquarium water. When densely planted, the algae additionally help to trap much of the POM as it passes through the unit. These types of refugia were an advancement upon a device developed by Dr. Walter Adey of the Marine Systems Laboratory at the Museum of Natural History (Smithsonian Institution, Washington DC) known as algal turf scrubbers. Where many aquarists found scrubbers (which use big screens and dump buckets to cultivate algae) to be overly cumbersome, messy and noisy, they hailed refugia as more practical—and far more capable of supporting pods. This is significant, since the pods are an integral part of the recycling process. Most important in this aspect is that the pods help to reduce the amount of POM and dead plant matter that is otherwise broken down by microbes; in so doing, they divert much of the flow of nutrients directly back to zooplanktivorous fishes and invertebrates in the form of an extremely nutritious food source.

Now, it should be considered that this can only be regarded as a supplementary food source, as there is a ten-fold loss of energy between each trophic level. In other words, due to the inefficiency of food energy conversion, only one gram of pods is produced from each 10 grams of waste that they consume (the rest is ultimately lost as heat energy). Of course, this is fantastic in terms of nutrient export. Just remember that tanks (with or without refugia) that are heavily stocked with zooplanktivorous animals will very likely still require regular additions of quality live feed such as 5280 Pods or our Ecopods Copepod Blend

Despite the complex biological workings of planted refugia, they are remarkably simple in design and function. Generally, they are constructed from a basic glass or acrylic tank. However, practically any nontoxic vessel such as a tub, bin or even bucket may be used. While a refugium may be situated above the main tank, they are typically placed below, frequently plumbed into the sump. Often, the desired water flow through the refugium will be considerably less than that in the sump; therefore, refugia that are separate from, rather than a part of, the sump are preferable, as water flow can be more easily manipulated. For this reason, a dedicated water pump is highly preferable.

Refugia that are used to cultivate macroalgae need a sufficiently intense light source. Refugium lighting may be run on a different photoperiod than that of the main tank. In fact, some aquarists run the two lighting fixtures on alternating schedules (i.e. one is on while the other is off). This serves to balance heat input from the fixtures as well as stabilize pH throughout the day (photosynthesizing plants consume CO2, which increases the water pH). A substantial amount of nutrients are exported as the plant biomass is regularly harvested and discarded. The macroalgae will sequester nutrients at a maximal rate if just enough is algae harvested to keep biomass high while just enough open space is set aside for continuous and vigorous growth. Purple non-sulfur bacteria (e.g. PNS Probio™) enhance this process by additionally removing nitrate while eating organic wastes secreted by the algae.

It should be noted that odd-ball refugia have now been utilized to culture everything from sponges to Aiptasia anemones. Some of these systems do not include macroalgae. But the important role of pods in nutrient recycling takes place in all of them. It is hard to argue, though, that the intriguing ecological interaction between plant (i.e. macroalgae) and animal (i.e. pods) that plays out in planted refugia is an effective means of natural water quality management. This has been proven time and again for decades. And while the basic methodology continues to be used, each generation of aquarists has been finding new ways to tweak the old idea (the ongoing experimentation with new types of refugium plants such as Chaetomorpha attests to this). Regardless of any improvements or novel uses that are yet to come for these useful components, this much is certainly clear: refugia are good for pods, are pods are good for the entire aquarium system.