There was once a time when zooxanthellate corals (especially SPS corals) were considered impossible to keep in captivity. Then advancements in aquarium lighting technology changed all that. It’s hard to imagine that there so recently was a day when marine aquarists abandoned the possibility of ever keeping Acropora–one of the most abundant genera of stony reef corals worldwide!

In the present time, it’s pretty safe to say that the hobby has gotten a pretty good hang of culturing “photosynthetic corals.” But if you look at a photo or video of a real reef, or especially if you visit one yourself, it’s clear that another, abundant, ecologically important group of corals is poor represented in our reef tanks: the non-photosynthetic (NPS) corals. Along with these are many cool sponges, oysters, tube worms, tube anemones, crinoid sea stars, tunicates, bryozoans, etc.

“Bryo-what?” you may ask… Exactly.

Anyone who has spent any time at all on a real coral reef understands that there are all sorts of sessile filter-feeding inverts that are conspicuously absent from our aquaria. While it’s great that we’ve more or less mastered the husbandry of LPS and SPS corals, there are a hell of a lot of other critters we’ll have to successfully keep if we really want our reef tanks to look and function anything like actual reef habitats.

This presents not just one, but two, distinct challenges for us. The first is of course feeding (animals that lack zooxanthellae obviously must consume a lot more food). But then, secondly, because we must feed these animals so heavily, we must additionally deal with a corresponding decrease in water quality.

Due to these challenges, NPS tanks are conceived  as difficult to manage. However, with improved (natural?) husbandry techniques, we might come to find that they’re as easy to keep as zooxanthellate systems. This article looks at ways in which hobbyists can simultaneously feed generously and maintain great water quality in a tank dominated by non-photosynthetic corals and other filter-feeding animals. 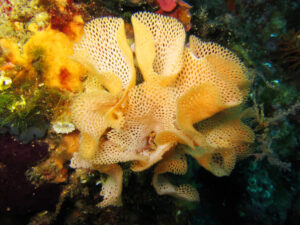 Unfortunately, there is no can-of-something that a hobbyist can use to feed all NPS aquarium animals. Just about as important as food composition is food particle size. When you are keeping critters ranging from ball sponges to sun corals, you’re talking about the task of offering diverse foods ranging from miniscule bacteria to whole mysis shrimp. For sure, you must feed a typical NPS system a great variety of items, and you must feed a lot, so be prepared to spend a good amount of time in your chef’s hat.

Also, keep those work boots on, because you’ll be performing frequent and intensive maintenance. At least on an ecological level, an NPS reef resembles a heavily stocked FOWLR system more than it does a “photosynthetic” reef dominated by zooxanthellate corals and clams. In other words, not only is there a large input of nutrients into an NPS system, but there is also a less robust natural recycling system via the autotrophic dinoflagellates within the corals and clams. Thus, it is even easier for nitrates and phosphates to accumulate to the point that they either harm the animals directly or cause massive blooms of anaerobic bacteria that can suffocate and very quickly kill them. For those that illuminate the tank (which isn’t necessary for an exclusively non-photosynthetic biological community), wicked algal plagues will be yet another concern.

With the huge excesses of nutrients, plus the heavy organic load, low pH/alkalinity, loss of trace elements and overabundance of potentially harmful aerobic microbes, the best and surest fix is an ambitious water changing schedule. Truth be told, big water changes are an unavoidable fact of life for successful NPS reefkeepers. Period.

An additional measure could be heavy-duty chemical filtration. And indeed, the use of activated carbon and other high-performance chemical filtrants can add a means of control. But you’re reading a take from AlgaeBarn, and if you haven’t yet noticed, we have a distinct preference for natural methods. And, naturalistic methods are at least as beneficial for non-photosynthetic system as they are for their photosynthetic counterparts.

The Whole is Greater 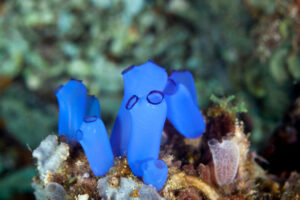 There are no better foods than live foods. This is self-evident merely on their nutritional merits alone. But then when you consider the fact that they generate less waste, they look even better–especially when trying to control water quality degradation in an NPS system. But even better yet, some live foods actually remove waste products from the aquarium water!

Consider first those food organisms at the bottom the food chain, the bacteria. Yes, those chemoautotrophic nitrifiers in your biofilter are important, but we’re not really speaking about them here. We refer more specifically to the heterotrophs that live freely in the water column. These bacterioplankton take up nutrients and dissolved carbon from the water column as they grow. But they also happen to be an important food source for sponges as well as bivalve mollusks, many gorgonians, etc. Nutrient build-ups may indicate a deficiency of organic carbon; convention carbon dosing methods may be used to remedy this. However, as most of the bacterioplankton are aerobic, caution must be exercised here to avoid oxygen-depleting blooms.

Use of a facultatively anaerobic heterotroph makes a lot of sense here. The regular addition of anaerobes such as purple non-sulfur bacteria (PNSB) serve to reduce both nutrient and organic loads without deleterious consumption of oxygen. And, these photosynthetic microbes are well-known for their impressive nutritional qualities. Not only are they rich in protein (often over 70 percent) but they also contain essential fatty acids and various carotenoids. And, they have proven themselves capable of supporting the survival and growth of delicate NPS soft corals such as Dendronephthya.

Perhaps the most nutritious and universally accepted food among non-photosynthetic filter-feeders is phytoplankton. Live phyto blends such as OceanMagik are ideal in that they are even more nutritionally balanced and provide a wider range of food particle sizes. And, they remove nutrients from the water as they grow (i.e. before they are consumed). And, regular dosing of phyto results in a larger and more nutritious population of copepods (yet another live food for NPS species that cleans up after itself by consuming detritus).

One more way to maintain good water quality in an NPS system is to install a planted refugium. This encourages the growth of photosynthetic autotrophs, thereby reducing nutrient levels, without illuminating the main tank. It also further promotes pod growth! A well-lit ‘fuge might even serve as a great spot to add any feedings of live phyto or photosynthetic bacteria. When connected to a perpetually unilluminated non-photosynthetic tank, a planted refugium can run on a 24-hour light cycle.