You are here: Home / Corals / Keeping and Feeding the Sun Corals

Reef aquarium keepers are always looking for that one oddball “piece” of coral that will really make their aquarium display shine. Sometimes this is just something a little different in terms of ecology or behavior. Other times it is something that is atypical in terms of shape or placement. Quite often it is something that has unusual or especially vivid coloration. But it takes something that possesses all three of these attributes to make for a truly stunning showpiece. The sun corals could certainly qualify for that distinction.

Sun corals differ considerably from the characteristic stony reef tank coral. Zooxanthellae, the symbiotic algae that make intense lighting so critical to reef-building types, is totally absent in sun corals. As a consequence, these “non-photosynthetic” corals much capture and consume a lot more food than their zooxanthellate cousins to survive. While this does create some additional responsibilities for the aquarium keeper, most people seem to very much enjoy watching these creatures as they feed. But they differ also from so many non-photosynthetic corals in that they have rather large polyps (they are indeed widely regarded as a LPS species) and secrete a calcium carbonate skeleton. And color? Few species, zooxanthellate or otherwise, exhibit the blazing oranges and yellows of this coral. Amongst the blues, greens and purples that prevail in most reef tanks, the fiery auburn hues in these guys really “pop.”

The name “sun coral” might refer to several superficially similar (and sometimes difficult to distinguish) species. One, Tubastrea aurea, appears to be one of the most commonly encountered of these in the trade. A feature of Lee Chin Eng’s famous marine aquaria in the early 1970s, it is among the first corals to be successfully kept by aquarists. Cultured by the Shedd Aquarium in the mid-1980s (sexually via planular larvae), it also among the first to be propagated in captivity. Still, it has a mixed record with regard to long-term survivability, particularly when maintained in brightly lit, zooxanthellate coral-dominated systems. This has for long led to a presumption that they are directly harmed by intense illumination. More recently, however, this supposition has been refuted; it increasingly appears that the key to success with these corals is proper nutrition.

Relying entirely upon nourishment derived from foods that they capture from the water column, they simply have not (at least in some cases) had an adequate amount of zooplankton available to them in typical reef aquaria. It is true that they tend be open (i.e. actively feeding) in the dark hours, and thus may be inhibited by bright lights and extended photoperiods; that being said, providing them with plenty of shade or even total darkness will help them little where proper types and amounts of food sources are lacking.

These are very hungry animals that (by many reports) can be “trained” to open for midday feedings when prompted by heavy spot-feeding. And indeed, spot-feeding may provide them with a substantial amount of sustenance (and be a lot of fun for the keeper). And they do seem to be able to capture and even ingest rather large amounts of food in short time. Nevertheless, like so many non-photosynthetic (NPS) corals, sun corals should be allowed to feed continuously as they are in their natural environment. Exclusively pulse feeding them may tax their digestive systems as well as be inefficient metabolically. Thus, the constant availability of a nutritious live food source will do much to maximize their health and reproductive rates. 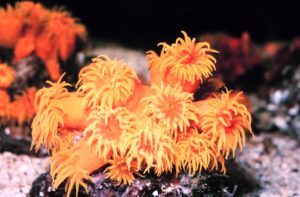 nd arguably easiest) way to accomplish this is to establish a large, stable population of zooplankton within the aquarium system itself. The harpacticoid copepod Tigriopus californicus (e.g. Tig Pods) can serve this purpose well. These hardy, highly productive copepods adapt easily to ordinary marine aquarium conditions. Reaching a length of as much as three millimeters, it is a very large copepod species and is thus quite suitable for sun corals, which prefer a rather big bite size. Tig Pods, which are benthic as adults, may be ensnared as they crawl onto the coral; they also have a habit of skipping into the water column and may jump right into the coral’s stinging tentacles. Rich in astaxanthin, Tig Pods are an excellent source of the biopigments needed to maintain the coral’s vibrant orange coloration. Occasional offerings of high-quality Artemia (i.e. brine shrimp) nauplii can help to boost growth rates. If pod predation intensifies as the sun coral colony grows larger and larger, the standing pod population can be replenished simply by adding a new bag of Tig Pods from time to time. Maintaining high pod densities in this way will do much to keep to the sun coral (and likely many of its tankmates) happy and growing vigorously. What’s more, these pods scavenge heavily on detritus and undesirable algae throughout the tank, and so will be an important part of the aquarium clean-up crew.

Especially in brightly lit tanks, sun corals should be mounted onto the ceiling of a cave or under a shadowy overhang with the use of a strong aquarium-safe putty or epoxy glue. Such a placement can encourage opening and feeding activity. This will also serve to protect them from overgrowth by benthic algae, to which they seem to be particularly susceptible. They must be positioned in such a way that they receive very strong water movement. Powerful currents are necessary to carry a large amount of food items to the animal, as well as carry away the large amount of waste products that it produces.

With the growing interest in NPS biotopes, one might soon see a resurging popularity of Tubastrea and related sun corals in the marine aquarium hobby. These sorts of aquaria certainly are built to provide an optimal environment for creatures of their kind. But, rightly fed and nourished, they can be very successfully kept in conventional reef aquarium systems as well. Wherever and however they are displayed, it is hard to deny that healthy sun corals are among the most beautiful of all marine aquarium species. [Phyto]

It is easy to see a reef aquarium as a peaceful landscape for escaping worldly problems. While this is partially correct, corals are not peaceful

Mixed reef tanks are well-loved because you can keep a diverse collection of corals in one tank. Many hobbyists like mixed reef tanks because they can