Advancements in the reef aquarium hobby have been developing at a dizzying pace. As our understanding of coral reef biota (and how to care for them in captivity) grows, many more tools are becoming available to those who wish to keep increasingly specialized aquarium systems. As of late, there has been a particularly strong interest in non-photosynthetic (NPS) aquaria like carnation corals. With a focus on proper foods and feeding techniques, rather than intense lighting, these systems offer an entirely new challenge to reef aquarists that have more or less mastered the husbandry of zooxanthellate corals.

For most, the initial attraction to NPS aquaria like carnation corals likely owes to the astonishing beauty of the diverse animals that can be displayed in them. These aquaria do not merely look different than their stony coral-dominated counterparts—in terms of aesthetic impact, they downright rival them. Arguably, the most attractive—and challenging—animals that can be kept in NPS systems are the carnation corals.

Historically, attempts to keep carnation corals in captivity for extended periods of time have been met only with very rare and limited success. While some of their poor survivability could perhaps be attributed to improper harvest/handling by suppliers, the major impediment seems to be related to nutrition. In truth, too many well-meaning aquarists have tried to keep them in conventional “mixed” reef aquaria, under blazing illumination, with food sources ranging from inadequate to nonexistent. The typical result was degeneration, overgrowth by algae, and ultimately death. They have consequently been dismissed by many as impossible to keep. That notwithstanding, the increasing sophistication of NPS systems and better availability of appropriate foods may soon place the prospect of long-term success with these corals within reach. 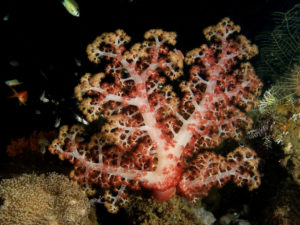 Lacking the endosymbiotic algae that provide so much nourishment for reef-building corals, non-photosynthetic species must capture and consume a substantial amount of food items to survive, grow and reproduce. They are typically quite picky with regard to the foods that they consume; not only do they tend to be specially adapted to capture items of a rather specific type and size, but are sometimes even capable of selectively rejecting less-than-preferable fare. While these creatures might accept (or even depend upon) a handful of food items, most appear to be specialized to feed either on phytoplankton or on zooplankton.

Carnation corals (also known as tree corals or cauliflower corals) belong to the Alcyonacean genera Dendronephthya. Oftentimes, variations of these common names (such as flower tree coral) are applied to the similar and closely related genus Scleronephthya. Colonies of rather miniscule polyps form highly branched structures that can reach a meter in height. They may be richly pigmented; color varies considerably, but exquisite pink, orange and lavender hues are common. Though they are a “soft” coral, the colony is well supported and stiffened by numerous hard slivers of calcium carbonate (or sclerites). This feature allows the coral to retain its shape in, and orient itself perpendicularly to, swift water currents. This is important, because it is in areas of strong flow that these corals can capture the most food in a given amount of time. And, to be sure, they need a lot of food.

Though Dendronephthya derives some its nutrition from items such as tiny organic particulates, bacteria, protozoa and zooplankton (of this, mainly copepod nauplii), the bulk of its diet comes from phytoplankton. Like a good many other soft corals, Nephtheids lack powerful stinging cells (or nematocycts) and instead rely on thick mucus and the pinnate structure of their delicate tentacles to catch food particles. Thus, only the tiniest of zooplankton can be captured and ingested. One field investigation of Dendronephthya hemprichi (Fabricius et al, 1995) revealed that there are about 1,000,000 phytoplanktonic items and 1.1 zooplanktonic items per liter of seawater in the animal’s environment. Yes, the zooplanktonic items also happen to be larger in physical size (i.e. bigger bites). Even so, the per-liter availability of carbon from phytoplankton is significantly greater than that from zooplankton—15 and 3.5 µg respectively. And, many of these zooplankters are simply of too big a bite size for this coral to consume. Thus, zooplanktonic components in its diet supply only a very small portion of carbon intake. In fact, findings here suggest that the actual carbon gain from phytoplankton is 50-200 times that from zooplankton overall. This is not to say that zooplankton are not an integral part of the Nephtheid diet; many now surmise that Dendronephthya obtains numerous vital nutriments from these sources. It does make clear, however, that these corals simply cannot survive without an extraordinarily rich source of phytoplankton.

Phytoplankton capture rates are variable and depend largely upon water flow. Dendronephthya is most densely established on deeper parts of the reef that receive fairly brisk tidal currents. These currents are laminar (that is, run in a straight line) but are bidirectional (that is, switch direction between ingoing and outgoing tides). This change of flow direction likely helps to provide equal feeding opportunities for all members of the colony. Increasing water velocity appears to increase food capture rates, but only to a point; if too strong, water currents can apparently blow food items out of the animals’ tentacles, strip away their mucus or even damage the colony itself. Fabricius determined that phytoplankton capture efficiency peaks at water flow velocities of 15-20 centimeters per second. When flow rates are optimal and food densities are high, wild specimens are capable of growing as much as a foot in a few short months.

But, in terms of captive care, it seems that proper food densities and flow rates are only part of the puzzle. One recent experiment conducted by Tim Wijgerde (2015), which provided model conditions with respect to these factors, concluded with unsatisfactory results. Even while maintaining good water quality throughout the experiment, the subjects gradually declined and perished within months. Most interesting is that when he placed a single specimen in his home reef tank, it seemed to remain in good condition for many months (and counting?). This suggests that Dendronephthya might have additional nutritional needs that are met in a well-developed reef community, be they urea from fish, choanocytes from sponges, or whatever. What is clear is that these needs were not entirely met in the “sterile” and decidedly reefless holding system used in the study.

This seems to confirm findings by Chuck Stottlemire (2008), who was able to keep Dendronephthya spp. alive (and even exhibiting growth) for over a year (until the system was destroyed due to a hurricane). Stottlemire insists that it is critical that foods be fed continuously, rather than in pulses. For this he recommends a steady cell count of 5,000-50,000 per cubic milliliter, which can be observed as a slight greenish tint in the water when viewed lengthwise through the tank. He also took care to provide a naturalistic alternating laminar flow pattern. But perhaps most importantly, this system was constructed from an already well-established aquarium community with plenty of fish and mature live rock.

It appears that even those r 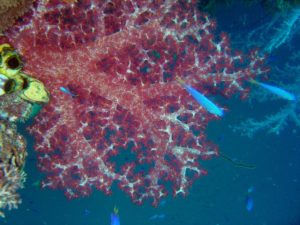 are accounts of success with carnation corals will, at least for some time, provide as many new questions as they will concrete answers. While it is obvious that there is much more to learn about carnation corals ( Dendronephthya ) before it can be recommended to the average reef aquarist, recent advancements in the aquarium industry have put us much, much closer to unlocking its mysteries. Whatever these final, elusive pieces to the puzzle might to be, massive quantities of phytoplankton are now known to be critical. The relative ease with which one can now regularly obtain premium live phytoplankton is the most significant of these developments.

Live phytoplankton reproduces within the aquarium. It thusly presents two distinct advantages over dead algal feeds. For one, as it reproduces, it will replenish its numbers, which might make it easier for the keeper to maintain stable feeding densities. And, as it reproduces, it sequesters excess nitrogenous waste products (e.g. nitrate, phosphate) from the aquarium water—not an inconsequential benefit in NPS systems, where animals are fed generously and such wastes can accumulate rapidly. It is also worth noting that live phytoplankton cannot rot. When using dead feeds, the risk of fouling exists even in the most meticulously maintained dosers. Since bacterial infection has been implicated as one potential cause of premature death in captive Dendronephthya, one might be acting wisely in using live products exclusively.

Moreover, one should use a feed that provides the broadest possible nutritional profile. Blends such as OceanMagik™ that contain live Nannochloropsis, Tetraselmis and Isochrysis are recommended, as all three of these phytoplankters have been demonstrated in the laboratory to be accepted by Dendronephthya.

And finally, one cannot discount the importance of zooplankton (especially copepods) in the diet of these corals. Products such as Tisbee Pods that contain the harpacticoid copepod Tisbe biminienses may be of great value here, as this species not only produces small, planktonic nauplii but also helps to control the growth of benthic microalgae which can smother and kill many NPS corals.

While the well-conceived efforts of Mr. Wijgerde and others have failed to effectively culture Dendronephthya the carnation coral, they did prove one thing: no attempt to keep these corals should be taken lightly. Those aquarists who want to try their hand at this challenge should only do so after establishing a healthy community of more adaptable NPS aquarium species. As a final preparatory step, some suggest achieving long-term success with the slightly less sensitive Scleronephthya. Having (1) allowed the aquarium system to fully mature and (2) perfected a feeding technique using high-quality live phytoplankton, one will be in the best possible position to succeed in keeping carnation corals. Though requiring an usual amount of patience, diligence and material resources, any fruitful effort to culture these magnificent animals would be worthwhile indeed.

3 thoughts on “Carnation Corals in the Home Aquarium: A New Hope of Success?”