Because most marine aquarists these days are reef aquarists–implying that they prefer tanks that feature a mainly rocky reef aquascape–not much attention is given to those animals that live in soft substrates (sand, mud, etc.). This especially is the case most lately with the renewed popularity of bare-bottom scapes. Unfortunately, while reefy aquaria are awesome and bare-bottom systems have their merits, these trends have arguably led to an underappreciation of many truly fascinating and beautiful sand-dwelling creatures. The tube anemones are certainly a good example of this.

Here we provide an overview of these distinctive critters’ natural history, morphology and aquarium husbandry.

Let us start this discussion with a giant spoiler: tube anemones are not true anemones. They however are somewhat related, being in the same subclass (Hexacorallia) as true sea 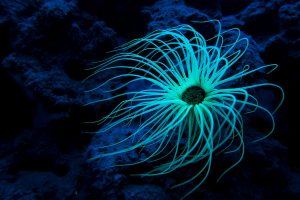 anemones as well as stony corals and zoanthids. This makes stony corals more closely related to tube anemones than they are to soft corals! All hexacorallians are formed from polyps with (usually) a six-fold symmetry. Though many members of the subclass are colonial, tube anemones are always solitary.

While there is ongoing debate as to where exactly tube anemones fit into the family tree, most zoologists place them in Antipatharia which also includes the “black corals.” The order Ceriantharia is comprised of around 25 species in three families.

Cerianthids are distributed widely across the world’s oceans where they inhabit soft sea floor habitats (often at considerable depth) that are abundant in their favorite foods: Zooplankton and marine snow.

It’s not all that surprising that a solitary, large-polyped cnidarian with long tentacles would be called (mistakenly or not) an anemone. Perhaps the most conspicuous way in which cerianthids differ from true sea anemones (aside from the tube, of course) is their lack of a pedal disc. The “foot” of an adult tube anemone ends in a more or less taproot-like structure. The column is elongated and highly contractile. A layer of strong ectodermal muscles along the column wall allow for the powerful contractions.

The “head” of the animal consists of a mouth and tentacular crown at the top of the column. Cerianthids are unique as a group for having two distinct whorls or tentacles, each with a special type of tentacle. The outer whorl contains the long, slender tentacles used mainly for food capture and defense; the inner whorl contains the short, stubby tentacles used mainly for eating. While their tentacles look deadly, they are shown to produce a sting no stronger than the average coral (and far weaker than an aiptasia anemone). Neither type of tentacle may be retracted into the column.

Cerianthids live in a tube as adults. The tube is made out of mucus and specialized threads (ptychocysts), though they incorporate other items such as sand grains, rubble, shell, etc. The tube might be much longer than the column of the animal itself and penetrate the sea floor fairly deeply (as much as six feet in some species!). When threateningly approached, the animal can contract itself as rapidly retract its whole body into the tube and likely under the substrate.

Tube anemones are azooxanthellate; therefore, while light doesn’t necessarily harm or disturb them, they do not require intense light (or any light) for survival.

Most aquarists find that tube anemones are (for as flat-out weird as they are) pretty straight-forward to keep in captivity. Arguably, they are easier to maintain than are most corals. Their only demand of the keeper is a very deep sand bed.

We know what you may be thinking. Oh yeah, I totally have a DSB. It’s like three inches deep.

Let’s try this again. Tube anemones burrow into tunnels that often are several feet deep. They don’t necessarily need anything quite that deep to survive in captivity; but do remember that a substrate depth is insufficient if it doesn’t exceed the full length of the animal.

Who in this hobby has a 12-inch substrate depth? Hardly anyone. And you don’t necessarily need one either to successfully keep one of these awesome animals. All you must do is create a deep pocket of sand. For example, you may construct and fill in a deep pit in the hardscape. To ensure that most of the sand stays put, it’s possible to hide a vase within the pit before filling.

Another great option is a refugium with an extra-deep sand bed. Even a cryptic-style ‘fuge works well here, as cerianthids do not require light for their survival. Sure, a tube anemone might eat an amphipod or huge copepods once in a while, but that’s what for pods are for!

But on the subject of lighting, don’t worry about putting them under light (even intense light). They don’t really respond to it one way or the other. Notably, in the evening or early morning hours while under subdued actinic lighting, they fluoresce strongly and can look truly stunning.

Actually, a happy tube anemone can make for an extremely impressive centerpiece in a display system. It’s almost a shame how seldom these cool cnidarians are used in our tanks!