Undoubtedly, reef aquaria wouldn’t be much without corals. But sometimes it’s those odd noncoral invertebrates that really grab attention and make a display unique. This is certainly so in the case of marine tube worms. 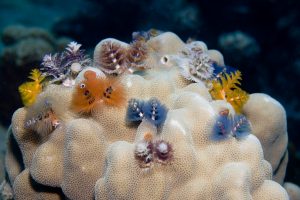 To be clear, we’re not talking about the squirmy little wormlike critters here (nematodes, planarians, etc.). We mean the true worms (Phylum Annelida). Annelids comprise a huge group (over 22 thousand extent species!) that includes everything from bristle worms to leeches and earthworms. These animals are segmented, symmetrically bilateral and possess a coelom (body cavity with a distinct digestive tract).

Annelids bear numerous, paired, chitinous, hairlike extensions called chaetae. In the class Polychaeta, these appendages (here called parapodia) are paired and highly adapted for mobility. There are basically two sorts of polychaete worm, each in its own subclass: Errantia and Sedentaria. Errantia (e.g. fire worms) characteristically are deposit feeders while Sedentaria are more often filter-feeders. More conspicuously, the errant polychaetes move about freely whereas sedentary types are typically confined to a tube or burrow. Parapodia are used either to crawl over/through the sea bottom or up and down the inner wall of a tube.

Because the filter-feeding apparatus (i.e. crown) of many tube-dwelling marine worms is beautifully colored, these animals are highly prized in the aquarium trade. This includes both hard and soft tube-forming species.

Overall, the soft tube worms are easier to maintain for extended periods of time in captivity. Many popular soft tube worms belong to the family Sabellidae. Known as the feather dusters, these worms have big feathery crowns and a paper-like tube. The group includes some of the largest and smallest tube worm species. Many of the smaller species are colonial (e.g. Bispira spp.). Some (but certainly not all) of the colonial types are quite hardy and may establish themselves in aquaria upon introduction via live rock. Some of the larger sabellids (such as Sabellastarte magnifica from the Caribbean and Sabellastarte spectabilis from the Indo-Pacific Ocean) are quite spectacular.

Coco worms (Protula bispiralis) are among the most popular, and most demanding, of the hard tube worms. The species forms a rock-solid calcareous tube that may reach over a foot in length. A pair of conical, usually reddish crowns emerge from the top. Though aquarists often like to position these animals such that they jut out upward into the open water column, they actually prefer more cryptic environments such as the roofs of caves or shady cliff walls.

Many aquarists dream of successfully keeping a healthy colony of Christmas tree worms (Spirobranchus spp.). These strange polychaetes strongly associate with SPS corals (usually Porites spp.). Christmas tree worms appear to burrow into the coral skeleton; however, they actually settle onto the coral as larvae and their hard tube is continuously grown over by the coral. Their name comes from the sharply conical shape of the crown, and perhaps its bright coloration.

It’s easy to want a tube worm or tube worm colony; the way the crown rapidly withdraws into the tube can easily awe any aquarist. However, it’s not always so easy to care for tube worms. 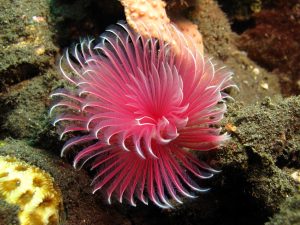 As mentioned, some of the smaller sabellid worms simply appear seemingly out of nowhere and require no special care at all. These prefer areas of lower water flow where particulate organic matter tends to settle out. Since they basically eat waste–detritus–they normally don’t require extra/supplemental feeding to survive. Indeed, they behave as natural mechanical filters.

Larger sabellids, on the other hand, usually demand a bit more in the way of feeding. These appreciate slightly more water movement and higher quality foods. In well-fed systems, their dietary needs may be met by suspended particulates associated with fish foods and coral foods. To guarantee that they are receiving an appropriate type/amount of food, feather dusters should be target fed a high-quality simulated marine snow feed such as PNS YelloSno.

Christmas tree worms are certainly not much easier than their coco worm cousins to keep alive for long periods, though it is possible in the right aquarium environment. Unfortunately, there remains a lot of disagreement as to what exactly they eat. Some suggest they eat discarded mucus from the coral host, while others reject this claim. Some also claim that these worms capture/consume smaller zooplankton, though this is also subject to some doubt. They do appear to eat at least some particulate organic matter. But the big part of this animal’s diet appears to be phytoplankton. Most likely, a balanced blend of live phyto (as in OceanMagik) will produce the best results. Particularly if the colony is established on an SPS coral, it is best placed in an area of very strong water flow.

At AlgaeBarn, we are always happy to hear from our customers and we often are asked a lot of questions about husbandry. Sometimes, we will see a trend in