You are here: Home / Phytoplankton / Thalassiosira: Big, Brown and Beneficial

There are a multitude of uses for live phytoplankton in aquaculture and marine aquarium keeping. These uses can be nearly as varied as the types of animals it is used for. Luckily, there are many different types of phytoplankton available to suite these many uses. Aside from factors like nutritional content, one of the key considerations when selecting a microalga for an aquarium feed is cell size. To us, these different algal species are all essentially the same size: miniscule. To a lot of filter-feeding marine invertebrate aquarium animals, however, these apparently slight differences in size truly matter. Because these creatures are often built to graze on phytoplankters of a specific size, a microalga that is just a bit too big or just a bit too small can significantly reduce the animal’s feeding efficiency. Of course, a fully stocked and diverse reef aquarium might house a community of creatures that prefer a mix of particle sizes. This is why (in addition to offering a broad nutritional profile) products that contain a smart blend of live phytoplankton species of varying size are ideal. To best meet the needs of phytoplanktivores that prefer larger bites, premium feeds such as OceanMagik include larger microalgae such as Thalassiosira spp.

Despite being fairly greenish in color, Thalassiosira belongs to the group known as the brown algae. Like all chrysophytes (i.e. diatoms), its outer cell wall is composed of silicon dioxide to form a sort of shell referred to as a frustule. The frustule is perforated, allowing for the movement of fluids into and out of the cell. For a single-cellular alga, diatoms have a very highly developed intracellular structure. Though they all contain chloroplasts, they only produce chlorophyll a and c; the characteristically golden-brownish coloration is imparted by carotenoid pigments such as fucoxanthin. They generally lack flagella (though flagella may be found on the bodies of some species during the reproductive phase). Resting spores, which are the result of sexual reproduction, are produced when cultures are exposed to cooler temperatures (e.g. refrigeration). These spores can survive at zero degrees Celsius for as long as 567 days. 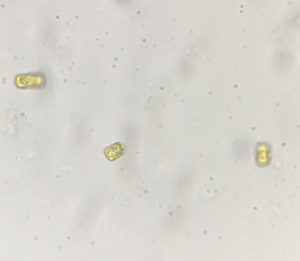 Measuring out at around 11 to 14 microns wide and 14 to 17 microns long, Thalassiosira is considerably bulky compared to most other commonly used microalgae. At certain times during its natural growing season, Thalassiosira weissflogii can attain lengths of 20 microns. The spherically shaped Nannochloropsis, on the other hand, only tops out at around 4 to 6 microns in diameter. Thalassiosira is roughly radially symmetric in form. It is non-motile. Though it is unicellular, individual cells are capable of attaching to one another by way of tiny filaments. In so doing, they may form long chains that make for even bigger bite sizes.

To many novice marine aquarists, “diatom” is a bad word; this is due to the frequent appearance of ugly brown films that some benthic chrysophytes form on the aquarium panels (particularly in newly set up systems). Thalassiosira is, however, entirely pelagic (i.e. living freely in the water column) and thus cannot create a nuisance of this kind. In fact, when used as part of a live product, it actually competes aggressively with its benthic cousins and helps to prevent their spread by taking up excess silicates from the aquarium water. It has also been shown experimentally to be able to take up when massive amounts of ammonium when starved. This means that it can compensate for wild swings of ammonium concentration, and also “get rid of it” quickly in the event of a spike. It has been shown in some cases to be capable of sequestering ammonium at a rate nearly 34 times that which is needed for growth.

As a feed, Thalassiosira is outstanding. Owing to its characteristic shape and size, it has for long been used successfully in aquacultural applications to raise bivalve molluscs such as clams and oysters as well as for larval shrimp. In the marine aquarium, it can be used to boost populations of copepods, which very often have a special taste for diatoms in particular. It may similarly be used to enrich brine shrimp just prior to use. It can also promote the growth of filter-feeding invertebrates such as tube worms, certain sea cucumbers, corals, and many other creatures. Regular additions of this hearty microalgae might even enable aquarists to keep highly desirable—but hard to keep—ornamental molluscs such as the beautiful flame scallop or the notoriously delicate feather sea stars. As such, it can allow the aquarium keeper to maintain a more diverse and certainly more interesting collection of animals.

But that is hardly where the special benefits of feeding Thalassiosira end. It just so happens 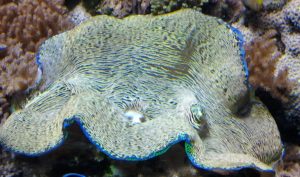 that it is packed with highly nutritious compounds. Like many other chrysophytes, it is capable of storing (and thus accumulating) certain lipids. These various fats and oils, including the omega-3 fatty acids, are essential for the long-term health of all marine animals. Thalassiosira also promotes high rates of growth and fast rates of repair, as it has a high protein and amino acid content. Though it is rich in amino acids overall, compared to other commonly used microalgal feeds, it has especially high concentrations of aspartic acid, serine, glycine, threonine, alanine, and isoleucine. Furthermore, its pigments help to maintain the rich coloration of animals that feed directly upon it, but may also indirectly brighten up fish that eat copepods that are gut loaded with it.

There is a good reason why so many aquarists and aquaculturists include Thalassiosira in their feeding regimens: it works. It is particularly useful for feeding phytoplanktivores that benefit from a larger cell size. It could certainly come to be the go-to feed for many challenging filter-feeding invertebrate aquarium species. Its unusually high protein and amino acid content can support fast growth and development. When used in a live product, it can even suppress the growth of nuisance algae in general and nuisance diatoms in particular. Undoubtedly, the judicious use of Thalassiosira can help to build a healthier, more balanced and more varied reef aquarium.