When imagining scenes from a warm, sunny, tropical coral reef habitat, it is easy to fill the visage with images of those zooxanthellate organisms (that is, animals that derive nutrition from certain photosynthetic dinoflagellates that reside within their outer tissues) that we aquarists are most familiar with. However, there are many types of creatures to be found in these environments, and they exhibit a vast miscellany of diets. Way too often, in fact, “difficult to keep” species wither away and die in unfed reef tanks simply due to starvation. If properly fed, many of these species could be easily maintained in aquaria alongside their zooxanthellae-harboring tankmates. Offered the right amount of a phytoplankton food of an appropriate particle size range and nutritional profile, these phytoplankton-grazing animals can do much to add interest, beauty and authenticity to any reef aquarium display.

The brown-golden marine microalga Isochrysis could certainly be counted among those phytoplankton that make excellent aquarium feeds. Actually, it has a relatively long record of this use. A great many aquarists have found it to be a suitable food for many highly desirable aquarium animal groups such as bivalve mollusks (flame scallops, spiny oysters, etc.). It is widely used in aquaculture facilities (in most shellfish and some shrimp hatcheries) as a feed for brood stock, larvae and grow-out stock. Its use as a food for filter-feeding marine aquarium animals has become more commonplace.

A golden marine phytoflagellate, Isochrysis (sometimes referred to by aquarists simply as “Iso”) is classified as: Prymnesiophyta (Phylum); Prymnesiophyceae (Class); Isochrysidales (Order); Isochrysidaceae (Family); Isochrysis (Genus). The genus is comprised of marine, free-living, unicellular flagellate haptophytes. It claims three species, namely I. galbana, I. litoralis and I. maritima. All of these reproduce by way of the simple fission of a mother cell into two separate daughter cells. While the latter two species have benthic forms, the former is exclusively pelagic in habit, making it the better choice as a food for suspension-feeding organisms.

Cell morphology is mainly spherical with a size range of 3-8 microns. The cell may be covered with (a sometimes relatively thick) mucilage. Its cup-shaped chloroplast is unusually large, taking up as much as a third of the cell volume. Often there is a single red “eye” spot. The cell is highly motile, with a pair of flagella that project from one end of the cell. Swimming is in a helical, spiral pattern. Physically, they resemble many planktonic diatoms, except that they lack a protective silica-based shell (frustule). Some group these species with the similar and closely related Tisochrysis lutea, an ovoid, flagellated microalgae measuring 4-6 microns in diameter. Isochrysis galbana is the type species (holotype) of the genus Isochrysis.

Like other chrysophytes, Isochrysis is capable of building stores of fats and oils. Isochrysis is high in polyunsaturated fatty acids such as docosahexaenoic acid (DHA), stearidonic acid and alpha-linolenic acid. The Omega 3 composition of I. galbana is often over 22% total fatty acid content (the so-called Tahitian strain of Isochrysis is said to be especially rich in DHA). For this reason, it is frequently used to enrich live zooplanktonic feeds (rotifers, copepods, brine shrimp, etc.). It has been used effectively to feed very demanding phytoplanktivorous corals such as Dendronephthya. One should be careful to distinguish the two different Iso strains by the names of Isochrysis galbana and Isochrysis aff. galbana from each other; the former strain (which was developed by Japanese aquaculturists for warm waters) is known to have a significantly higher total lipid content than the latter.

Very often, due to its high DHA content, I. galbana is used as a component of blended 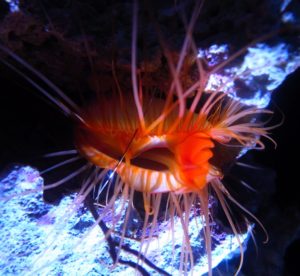 phytoplankton feeds. As it is with premium live products such as OceanMagik, it is frequently paired with Nannochloropsis (which is high in EPA, but is lacking in DHA). It additionally boasts high concentrations of vitamins (Vitamin A, B1, B2, B6, C, E, folic acid, nicotinic acid, pantotenic acid, etc.). These essential vitamins play a large part in overall health, including factors such as eye health, larval development and growth rates. Isochrysis is also a good source of the amino acids leucine, lysine and alanine. At around 45 calories per 10 milliliters algal biomass, it is on par with other commonly utilized microalgae in terms of metabolic energy yield.

Perhaps not surprisingly, pure and dense cultures impart a golden-brown hue to the naked eye. Like most of the other chrysophytes, Isochrysis is rich in the xanthophyll pigment fucoxanthin. Its most abundant pigment, fucoxanthin, is typically produced in very high concentrations (around 18 milligrams per gram of dried sample). It is also rich in the pigments chlorophyll-a, chlorophyll-c, lutein, β-carotene, zeaxanthin and cantaxanthin. These pigments can be passed down the food chain (e.g. through copepods). Thus, their presence in fish and invertebrate foods can have a significant impact on the coloration of aquarium animals.

Used as a supplemental feed, it should be added in an amount that just barely tints the aquarium water; this cloudiness will rapidly dissipate as the algae is consumed by hungry filter-feeding aquarium animals. While it remains suspended in the water column, Iso can remove excess nutrients such as nitrate and phosphate from the aquarium water. It can grow under a wide range of light intensities (2,500-10,000 lux). It prefers tropical temperatures and typical seawater salinities, so it tends to flourish in conventional reef aquaria (before it is eaten, of course).

Clearly, there are more than a few reasons why Isochrysis has been among the most favored types of microalgae by aquarists and aquaculturists for so long. It thrives under a broad range of water parameters and light levels. Its median cell size makes it suitable as a feed for numerous and diverse phytoplanktivorous aquarium species. It contains very high levels of the essential fatty acid DHA as well as vitamins and color-enhancing pigments. Its high caloric content and richness of certain important amino acids make Iso a wholesome part of any grow-out diet. When nutritionally complimented in a carefully formulated multi-species mix, it can be utilized very effectively in blended live phytoplankton feeds. By using a product containing live Iso on a regular basis, aquarists can even maintain reef animals that they would otherwise never be able to keep!

Photosynthetic corals dominate natural, shallow tropical coral reefs. So it shouldn’t come as much of a surprise that they are so prevalent in the reef