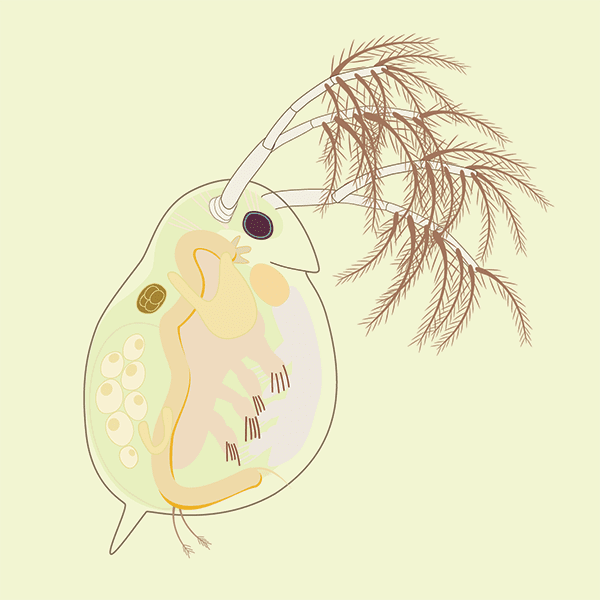 Daphnia sp., widely known as water fleas, are hardly new to the aquarium scene. Freshwater aquarists (and perhaps quite a few saltwater aquarists too) have scooped them from ponds, ditches, etc. to use as aquarium feed for at least a century. Some particularly assiduous hobbyists have even found success culturing these tiny crustaceans for long periods of time by feeding them homemade green water. And perhaps a little yeast… And a little of this, and that…

The effort of cultivating these creatures, however laborious, has proven worthwhile to many serious aquarists (especially fish breeders). The reason for this is simple: Daphnia are extremely nutritious and fish love them. Still, for those who just don’t have the time to raise their own (or to wade into the nearest waterhole with a dip net every weekend), obtaining inexpensive, fresh, live daphnia has been frustratingly difficult.

AlgaeBarn has changed all of that with the commercial-scale production of Daphnia magna. For those who aren’t yet all that familiar with the water fleas, these are big ones. Actually, at a length of up to 5 mm, they’re about two or three times as large as the average daphniid. This makes them a bona fide community fish food. While not too big for some corals (mainly LPS), they are certainly large enough for a considerable variety of reef fishes to capture and consume. Their slow, conspicuous (sort of daft, to be honest) swimming movements make them a sure target for any zooplanktivorous reef fish in particular.

This all makes them really, really useful for a couple of purposes. Firstly, they are very effective for prompting sick or unusually finicky fish (e.g. tilefish) to resume feeding. While easily noticed, and apparently very alluring, they are effortlessly captured even by slow, ill or shy fish. They are just as easily consumed, as they cannot put up much of a fight going down.

Secondly, they are highly useful as a supplemental live food item. Of course, the diet of the food organism affects its nutritional content. But daphniids are generally quite wholesome regardless of what food they’re raised on; at around 45-70% protein and 11-27% fats/oils, they’re not too shabby as far as pod nutritional content goes. And their larger size all but guarantees that most, if not all, of your reef fish get a few big bites. While we stress that these are definitely great as a “treat” for the typically diverse reef fish community, they’re downright amazing for enhancing the diet of more dedicated zooplanktivores like seahorses, pipefishes, anthias, Genicanthus angelfish, large mandarins, etc.

The key to using this particular pod is feeding it out slowly. The reason for this is that it cannot survive for very long in full-strength seawater. Luckily, it is adapted to slightly brackish environments (up to 8 ppt) and can 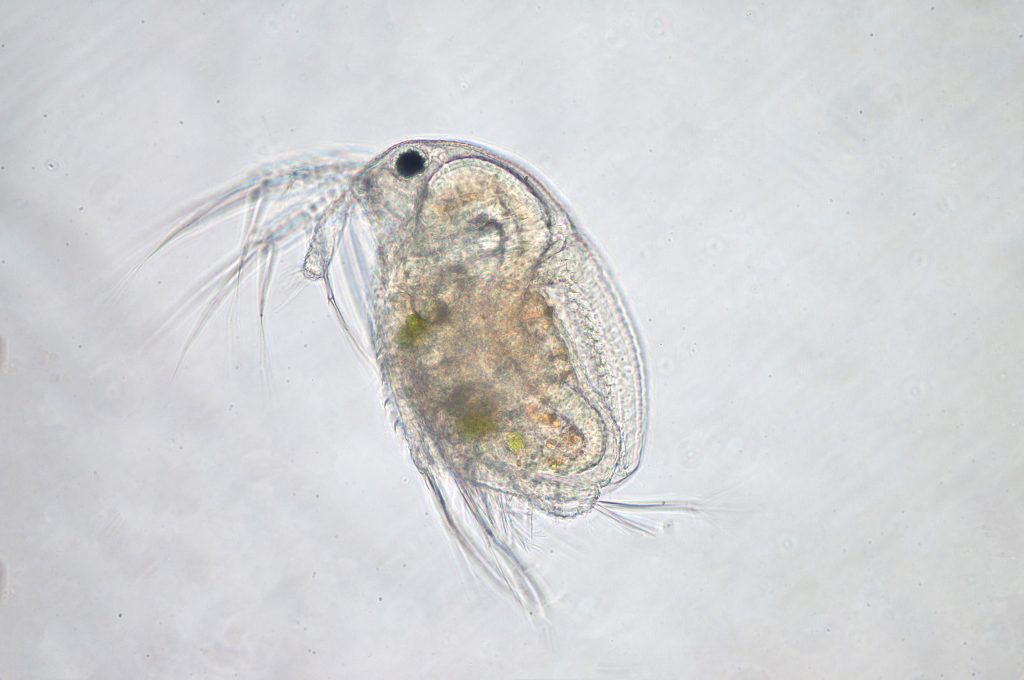 tolerate reef conditions for a short while. Adding just a few at a time ensures that each gets eaten while still hanging openly in the water column. This is especially important for strongly zooplanktivorous types of fish such as seahorses. One cool thing about these Daphnia magna is that they are raised in brackish conditions and are pre-adapted as much as possible to the salty waters of your reef system.

If you wish to feed them out very slowly, you can simply hold them in a gallon or two of dechlorinated tap water (unheated and lightly aerated) with a very small amount of salt (just a few parts per thousand). To maintain their health and nutritional value over longer periods of time, we recommend feeding them while they are in holding. Like other daphnia, they eat a wide variety of tiny things ranging from phytoplankton, bacterioplankton, detritus, protozoans, and so on. AlgaeBarn recommends feeding them with what they feed them: A base diet of OceanMagik (for protein, fatty acids, carotenoids) with a dash of PNS YelloSno (for yet more protein as well as vitamin B12).

While daphnia reproduction is a bit on the slow side (just a few individual young per clutch!), they persist for quite a while under basic culture conditions. They are not particularly demanding, but certainly live longer and at higher densities when conditions are relatively stable. Daphnia magna has an average lifespan of ~40 days at 25°C and ~56 days at 20°C. Give them frequent but small feedings of high quality food (preferably a B vitamin-rich diet based on live phytoplankton) and refresh their culture water often (30-50% changes every day or so). A source of bright illumination (12-14 hours/day) helps to keep live phyto (if used) alive. You’ll probably notice that they do consume their food very quickly. Despite this, do not be tempted to overfeed; foul water will ruin a culture in very short time.

Those with large, well-stocked reef systems won’t need to bother with holding. That’s for sure! In those cases, a whole portion of these daphnia can be added at once, as the fish won’t rest until every individual is consumed. You might even be surprised by the ferocity with which fish attack these big, juicy pods. Even if your fish are spoiled with regular additions of live brine shrimp, they’ll still go nuts when they see daphnia hit the water. We’re honestly not sure if it’s their beefiness, the way they swim or their nutritional content that consistently drive fish so wild–we’re just stoked that they work so well!

100 thoughts on “Daphnia as a Live Marine Aquarium Food”