You are here: Home / Copepods / Feeding Your Hungry Pods

Marine aquarists are really attempting to accomplish several goals when introducing copepods to their systems. These undoubtedly include elimination of detritus, controlling nuisance algae and providing excellent nutrition for countless reef fish and invertebrate species. But the general aim, of course, is to create a more dynamic and balanced captive ecosystem. After all, copepods are among the most abundant animals (in terms of both numbers and biomass) in most marine ecosystems and, perhaps even more importantly, form the base of nearly all marine food webs. Without a large, productive population of copepods, any marine aquarium will be unbalanced. These imbalances can present themselves as less-than-optimal health for aquarium livestock and a not-so-impressive appearance to the aquarium display. 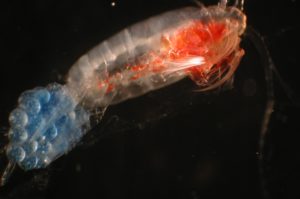 Copepods are incredibly tough and adaptable creatures. They often can establish fairly stable, lasting populations in captivity. Considering the enormous payoff one will receive by adding them to their aquarium system, the ease with which they may be used is downright amazing. Nevertheless, maintaining large, productive populations of pods (and therefore garnering their maximal positive effects) does require a small amount of routine observation and upkeep.

In this respect, it is important to understand that aquarium systems are (however much effort a keeper puts into creating the most natural environment possible) inherently unnatural. As such, they present a variety of decidedly unnatural challenges to copepods. For one, aquarium filter systems are full of hazards, ranging from entrapment in mechanical filter media to deadly irradiation in ultraviolet sterilizers. Another is heavy predation. The conventional reef tank is chock full of fish and invertebrates that very much love eating copepods (some of which are capable of consuming hundreds or even thousands of pods in a single day). But surely one of the most overlooked stressors to copepods in closed aquarium systems is starvation.

Admittedly, copepod starvation is the last thing on the mind of so many hobbyists who use pods to revitalize a failing system. By the time they opt to establish, boost or diversify their pod population, the tank is already packed with detritus and overgrown with “bad” algae. This absolutely sets the stage for a pod population explosion. And indeed, over time, the results in such cases are great, leading to a “cleaner” tank and a markedly less intense maintenance routine. But this is where copepods can be victims of their own success.

Eventually, after scouring every morsel of food from the rock, sand and glass, the pods might begin to starve. This can draw them from the darker recesses in the tank out into the open, where they are mercilessly preyed on by highly-adapted pod-eaters such as mandarin goby and seahorses. In this scenario, it is the adult (that is, reproductive) individuals that are most targeted, strictly limiting the pods’ capacity to replenish their own numbers. Also, with the reduction of nutrient-laden detritus, there may be less phytoplankton in the aquarium waters. At a glance, this might not seem like much of a problem to most aquarists who desire nothing less than crystal-clear water. Clear like a natural reef, right? Well, the high clarity of waters over coral reefs owes not to an utter lack of phytoplankton, but rather to the fact that phytoplankton is very quickly consumed in these environments. Actually, microalgal productivity can be very high in or around these habitats, though it may not be apparent due to extremely intense herbivory. This is evident by the huge and wide-ranging group of reef-dwelling organisms (including so many corals) that depend upon phytoplankton for their survival. Absolutely, copepods are included in this long list.

The vast majority of small crustacean arthropods we refer to as “pods” undergo a pelagic (i.e. open water) existence at some point in their life cycles. Very often, this takes place during the naupliar (i.e. larval) stages. At this time, the principle (if not exclusive) component of their diets is free-living, suspended, single-celled algae (i.e. phytoplankton). Naupliar pods are specially adapted to capturing and consuming this food source. They may even be morphologically modified to selectively feed on specific, favored types of phytoplankton. A ready supply of phytoplankton (in the right amount and of the preferred type) is critical in rearing these youngsters to adulthood. While it is easy enough to see the need to use phytoplankton to supplement the diet of copepods that are pelagic as adults such as Apocyclops spp., too often hobbyists do not recognize the importance of such feedings for copepods that are benthic (i.e. bottom-dwelling) such as Tigriopus spp. and Tisbe spp. Even though the latter two genera live on the sea bottom and graze on solid surfaces as adults, their nauplii are pelagic and thus require phytoplankton for proper growth and development.

So, all of the good reasons for adding pods to a tank come with some very good reasons to add phytoplankton. Yes, not only will this promote better vitality and coloration for phytoplanktivorous reef aquarium livestock, but it will also serve to enhance pod productivity. And, no, the aquarium waters need not be perpetually pea soup-green to accomplish this. Supplemental additions of phytoplankton are best administered

in frequent, but relatively small, doses. This diet is enhanced significantly with the addition of live, carotenoid-rich, phototrophic bacterioplankton such as PNS Probio™.

Used in this manner, the water might at first have a slightly discernable greenish tint, only to clear within hours as the product is greedily consumed by pods and other aquarium animals. When using a high-quality live phytoplankton product such as OceanMagik, overall water clarity can actually increase; this is because the “good” phytoplankton (by aggressively taking up excess nutrients) outcompete the “bad” phytoplankton that may not be preferred by the tank’s resident phytoplanktivores, including pods.

Again, sure, pods are fairly easy to culture. This is even the case in a reef tank, despite all of the somewhat unnatural perils that they have in store for little crustaceans. But large, productive pod populations oftentimes cannot be maintained without supplemental feeding. Every aquarium system is unique, so a specific feeding regimen can only be perfected by the aquarium keeper. Dosages and feeding frequencies can be modified as needed; need should be determined by any observed change in pod abundance. Adding phytoplankton is a rather simple task, but it can go a long way in ensuring healthy pods—and therefore a healthier aquarium environment overall.