You are here: Home / Copepods / Pod Size Matters: Feeding and Seeding with Copepod Cultures of All Life Stages

No matter how or when you do it, adding live copepod cultures to a reef aquarium has numerous benefits and absolutely no drawbacks. These tiny crustaceans provide an extremely nutritious, natural food source for a wide variety of reef animals ranging from gorgonians to mandarin fish. Additionally, if conditions allow for it, seeding can lead to a lasting pod population within the aquarium system. Where a sizeable, stable, healthy population of pods persists, aquarium animals have a steady supply of nourishment. As the pod population grows, it feeds hungrily on detritus and undesirable benthic algae, promoting a much cleaner environment. Just think about that: a wholesome, continuously available food source for the finickiest of creatures… and one that actually cleans your tank! You simply cannot just pull any such fish food out of your freezer. 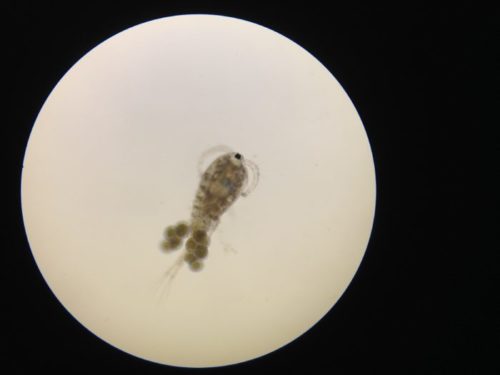 But not all packages full of pods are the same—not even among live copepod products. You may, of course, find one pod species preferable to another on the basis of intended use. The particular advantages of each different kind of copepod have become clear since a number of species have come into common use. What is not frequently discussed amongst aquarists, however, is the advantage of adding pods of all life stages (i.e. all ages). Feeds/starting copepod cultures that represent a wide range of ages might be ideal for a couple of reasons. For one, live copepods vary significantly in size depending upon life stage. A generalized size range for marine copepods might be something like 100 micrometers (for nauplii) to 1000 micrometers (for adults). So, mixed life stage products offer feeding opportunities for a broader range of aquarium inhabitants right out of the bag. Furthermore, they eliminate lag times within the cycle of population growth. In so doing, they can both facilitate and accelerate the establishment of permanent resident populations. While elaborating upon these many benefits, it might be helpful to review the copepod life cycle.
[Copepods]

Unlike some other, similar small crustaceans such as the cladocerans, copepod reproduction is mainly, if not entirely, sexual. Female harpacticoid (e.g. Tisbe) and cyclopoid (e.g. Apocyclops) copepods carry fertilized eggs in an external egg sac. Upon hatching, the brood emerge as tiny, unsegmented forms that are very much unlike adults in physical appearance. Especially among the harpacticoids, stark differences of lifestyle (including diet) can mean that young and old copepods will also differ markedly in nutritional content. They may even have very different behaviors. Newly hatched pods (referred to as nauplii) generally live freely in the water column as plankton. They must swim continuously and are positively phototropic (i.e. attracted to light). This is so even for the vast majority of harpacticoids, which tend to live on the bottom as adults. Changes in both size and morphology coincide with six distinct naupliar stages of development. These are oftentimes referred to as stages N1 to N6.

But they are not done growing and changing yet. After completion of the naupliar stage, copepods continue development as what are referred to as copepodids. There are five or six distinct copepodid stages. These are oftentimes referred to as stages C1 to C6. During the harpacticoid copepodid stages, there is a diminishing attraction to light; generally, by stage C4, they begin to attach to the substrate. The most noteworthy aspect of the copepodid stages, however, is the increasing segmentation of their bodies and the emergence of new appendages. It is only towards the end of the copepodid phase that youngsters start looking like (and behaving like) adults. While the geniculate antennae of males can still barely be seen by the C5 stage, they are conspicuous by the C6 stage. Mature harpacticoids remain attached to the substrate for periods varying from seconds to minutes. For example, Tigriopus will sporadically skip and flutter off the bottom, tantalizing any small fishes nearby.

A growing copepod will replace its exoskeleton between each stage of development. The terminal (i.e. final) molt results in a full-sized, sexually mature adult. While its life cycle may be completed in as little as a week in smaller pod species, it sometimes takes as long as a month. In the largest copepod species, it may take nearly an entire year!

Live Pods of the Ages

Seed copepod cultures/feeds might disproportionally represent certain life stages. This is usually due to the use of larger screen mesh sizes during collection. Why use course mesh for harvesting? In some cases, technicians use larger mesh sizes simply out of expedience; finer meshes clog easily. In other cases, they are used expressly to separate larger from smaller individuals. Course meshes tend to trap later-stage (that is, larger) individuals while allowing early-stage (that is, smaller) individuals to pass. One might use the smallest live copepods to feed tiny larval fishes or fine filter-feeders. One might retain the larger (that is, reproductive) individuals as brood stock to keep production going at a rapid pace. But buyers beware: when offered as a product for aquarium hobbyists, an unduly large percentage of adults might be included for the sake of appearance; to the uninformed customer’s naked eye, seeing more means that they got more. This, however, is most certainly not the case. A bag of live copepods might be (or might not be) teeming with thousands of unseen nauplii.

That all being said, just about every reef aquarium will benefit most from the addition of a mixed life stage product. The very best general-use products (such as 5280 Pods) include a variety of species and a full and balanced array of life stages. This will ensure that every filter-feeder and every consumer of benthic microcrustaceans gets just the right bite size from the moment they are added to the tank. Yes, those big old pods are great for feeding large-bite-size livestock like fish; nonetheless, many of your small-bite-size livestock such as corals will relish the teeny ones. A mixed life stage product will also promote a steady, uninterrupted population growth after seeding. Perhaps most importantly, with a mixed life stage product, you may be getting way, way more individuals than what meets the eye. Seeing more is great, but actually having more live copepods is even better!