You are here: Home / Clean Up Crew / Aquarium Cleaning Machines: Cerith Snails in the Reef Tank

An aquarium substrate surface can be a dirty place. Detritus, feces, uneaten fish food, film algae and other unwanted materials might pile up there. Fortunately, there are many “clean-up crew” creatures that can be used to remove various types of nuisance algae and/or settled organic wastes. There are only a few cleaners, however, that will feed on all of these materials. One such animal is the cerith snail.

The cerith snails, or cerithiids (Family Cerithiidae) form a fairly large group of marine gastropods. Though the cerithiid genus Cerithium occurs worldwide, the majority of specimens found in the aquarium hobby are harvested in the Caribbean Sea. The “true” cerith snail Cerithium litertatum is one of the most commonly seen species in the marine aquarium hobby. Though they have yet to become a standard clean-up crew member, their use in the hobby is sure to gain popularity. 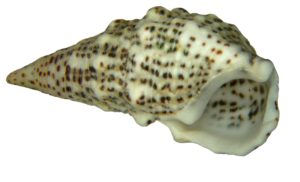 to other aquarium snails, ceriths have a large number of positive attributes. They are exceptionally easy to care for. They are quite resilient and long-lived, and are comparatively less sensitive to changing aquarium conditions (e.g. salinity fluctuation). They are completely reef-safe, and have not been reported as a threat to any kind of beneficial organism. Their smallish size (usually less than an inch) permits their use in nano aquaria and allows them to reach into tight crevasses between rocks (and not knock over small attached items like coral frags). Their burrowing behavior helps to stir and aerate aquarium substrates. Best of all, they serve as overall effective aquarium bottom cleaners; not only will they consume particulate matter that is trapped within the sand bed, but they will also grab anything they can on the surface such as hair algae or ever cyanobacteria. Many aquarists who keep them do not realize how active they really are, since they forage mainly during the dark hours. When they can be seen, however, they are fairly attractive animals.

The typical cerithiid shell shape is sharply conical (i.e. elongate with a finely pointed spire). A large number of whorls may develop. The shell aperture is oval in shape and is covered with a thin, brown, horny operculum. The shell surface is often textured with tiny ridges and nodules. Though generally not brightly colored, some shells bear pretty patterns. Fine, alternating dark and light bands are sometimes evident, highlighting the shell surface texture. Most often, the back color is black with a covering of many small, lighter-colored dots. Patterning, however, can be quite variable even within a local population. Though it is delicately textured and has a fine point, the shell is quite thick and sturdy. Shells left over from dead cerith snails are highly sought after (and fought over) by certain hermit crab species.

Cerith snails live just above and just below the surface of soft sea beds where they scavenge intensely for pretty much any sort of matter they can grab. These omnivorous scavengers are active mainly at night, stirring the upper parts of the sand bed as they bulldoze through the sediments in search of food. They tend to favor relatively shallow, sheltered waters near and below the low-tide line. They are common in tropical and temperate habitats with organics-rich sediments such as mudflats, seagrass meadows and the seaward edges of mangrove forests. They can oftentimes be found in great numbers where they occur. Because they are adapted to live at or near the intertidal zone, they are generally quite hardy (particularly for a marine snail) and usually have a high survivability under captive conditions. 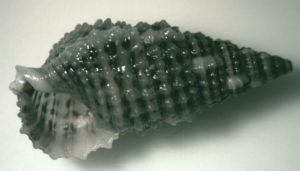 with mature sand or mud bottoms (whether in the display tank or refugium). About one snail per five gallons of tank size is recommended. The aquarium system should be established for at least few months before introducing this voracious scavenger. Though they make little impact on the tank panels (at least away from the bottom edges), their presence is usually evident on the substrate. Most notably, they are prized for their ability to eliminate algal and bacterial growths on the glass just beneath the substrate surface. If a good number of snails is used, obvious results will be observed rather quickly. Detritus pockets, diatom patches, and so on will disappear in big, nightly increments. As they prefer algae, they will target algal films before attending to other food sources such as detritus. In fact, after some time when the snails have mostly stripped the substrate of organic wastes and microalgae, they may need to be fed supplementally for long-term maintenance; sinking algae wafers (offered nocturnally, of course) can suite this purpose well. (For persistent issues with detritus accumulation, try a reliable sludge-eater such as live purple non-sulfur bacteria (e.g. PNS Probio™)).

These adaptable creatures settle into aquarium life very well and require no other attention from their keeper. Once they are established in a healthy aquarium, they often will begin to breed (though the eggs are usually snatched up by other aquarium animals). Just one more very, very nice thing about cerith snails is that captive-bred cerith specimens are now available. These aquacultured individuals are even more hardy and aquarium-friendly, as well as being more sustainably produced.

Particularly for job sites around the surfaces of soft bottoms, the cerith snail is undoubtedly a must-have clean-up animal for any marine aquarium. It has a reasonably long lifespan in captivity and its hardiness is pretty much unmatched by other snails. It will not attack any aquarium animals nor will it consume desirable microorganisms. It will eat types of biofilms that other scavengers might ignore, including cyanobacteria. It reaches important spots that other cleaners might miss, such as areas on the glass that are beneath the substrate surface. While it can play a huge role in cleaning, stirring and aerating the upper parts of the sand bed, it does not disturb the beneficial microbial microzones in the deeper parts of mature substrates. And, it is even fairly attractive. Now that healthy, unstressed, pathogen-free specimens are offered as captive-bred, marine aquarists have little excuse not to make cerith snails a major part their clean-up crews.