We have some very exciting news to share about ocean pollinators! Marine researchers in France have just released exciting news that could change the way we look at pollination. It comes from a surprising place but the birds and the bees will not be taking all the credit for this one!

Pollination is a concept in science education beginning in early primary school years. But many of us are probably unaware that pollination can be taking place in our reef tanks! In this post, we are going to talk about this new discovery and how it impacts the hobby.

Our reef tanks are very active ecosystems. In any given moment, there is potential for an unlimited number of microscopic transactions. It is certain that in our own refugium, pods are breaking down excess wastes at this very moment. Or maybe they are controlling film algae that is building up on the glass. We know that pods are multitaskers in the reef tank. But, as it turns out, they’ve been working harder than we realized! 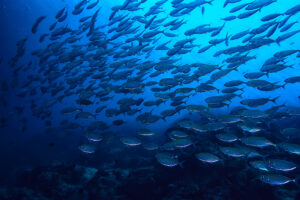 Let’s talk about the pods and the seas

For a long time, we have given credit to the birds and the bees for their work as pollinators. We all recognize the important role that insects have in plant reproduction. These guys have evolved to efficiently pass pollen between plants. Researchers have now realized that these dealings are taking place in the ocean as well as on land.

In a recent study published in Science, the relationship between algae and crustacean is more complex than we realized. A small crustacean has been identified as an ocean pollinator for the red algae, Gracilaria. This is so exciting for several different reasons. For starters, it is the first time an animal has been observed pollinating a red alga! This discovery also adds to the list of species that reproduce this way. And lastly, this raises questions of how this breeding method truly evolved. But first, let’s have a quick general recap of life as a copepod. 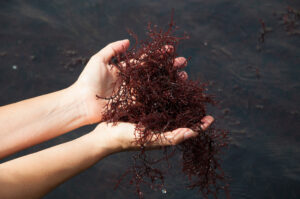 Life as a pod

Many of the creatures we find burrowing in sand or scampering around seaweed on the beach are a type of crustacean. Arthropods, includes animals with jointed limbs and hard exoskeletons. Land-dwelling arthropods are insects and spiders. In the aquatic ecosystem, this includes the copepods and isopods. The arthropods also include crabs, shrimp, and lobsters.

Arthropods like copepods and isopods serve a vital role in the aquatic food web. As we all know, pods are always on the menu for reef dwellers like fish and crabs. Pods are also crucial in the decomposition of organic materials. In nature, massive numbers of pods feasting on seaweed get brought to the shore by waves and currents.

Pods consume dead and rotting algae and seaweed. Microbes will consume the wastes left behind by the pods also contribute to stability on the reef. Parasit 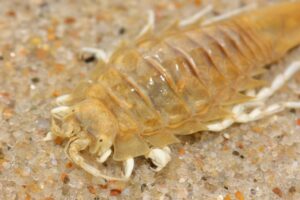 ic pods survive by hosting on other animals. Parasitic amphipods thrive on jellyfish, while parasitic isopods can live in fish gills and fins.

Isopods, like amphipods and copepods, are crustaceans. Because their appendages resemble one another, the word iso (same) + pod (foot). These critters can be carnivores, parasites, or they can be scavengers. Isopods look like flattened insects. They are bottom dwellers but can be found crawling among the rocks in tide pools and dock pilings.

Amphipods have paired eyes while copepods have a single eye in the middle of the head. Their exoskeleton is made up of overlapping plates. Copepods do not have a complex circulatory system. They take in oxygen directly through diffusion. However, amphipods have both gills and a genuine heart.

Until recently, it was assumed that animals only pollinated plants on land. In 2016, scientists learned that zooplankton pollinated turtle grass in the ocean. Although sea grasses are the only flowering plants found in the ocean, they are closely related to terrestrial plants. However, seaweed is not closely related to terrestrial plants despite being technically plants. 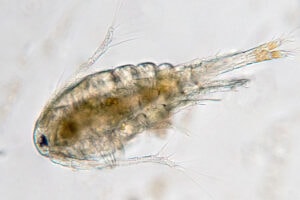 They wondered if the isopods could help spermatia disperse. Spermatia is basically the algal equivalent of pollen. Gracilaria produces spermatia that, like pollen, can’t disperse on their own. Earlier research showed that the spermatia of Gracilaria were dispersed by ocean currents. However, given the abundance of Gracilaria in calm, coastal rock pools, it was very likely that another mechanism was at work.

To test their theory, scientists cultivated male and female Gracilaria in captivity. Then they separated them in tanks six inches apart. Half of the tanks had isopods, while the other half had none. By the end of the testing, they discovered that fertilization happened around 20 times more often in the isopod tanks.

In a later experiment, the researchers moved isopods from tanks with fertile male Gracilaria to tanks stocked with unfertilized female algae. They discovered that this resulted in a high rate of fertilization. When they analyzed the isopods, they had microscopic spermatia practically covering their bodies!

The isopod appears to have a mutualistic relationship with Gracilaria. The algae supply food and shelter to the isopods. In exchange, the isopods aid in the fertilization of the algae. The Gracilaria group is thought to have evolved millions of years before the first plants. Isopods only appeared on earth around 300 million years ago. Prior to that, red algae probably relied on now extinct inverts to pollinate them.

More research is needed to learn if other red algae rely on ocean pollinators. This could be crucial to our efforts for preserving biodiversity in the ocean. Studies have given us plenty of data on how pollution and climate change affect plants and pollinators on land. However, we simply don’t know how they affect algae and their ocean pollinators.

We always knew that our reef tanks were very busy ecosystems, but they never cease to amaze us! And there is always the potential to learn something new every day. This data has revolutionized the way we think about our reef tanks. Red Pom Pom, a type of Gracilaria, has been one of our most popular macros. It adds a punch of color to any refugium or display with vibrant crimson and burgundy hues.

When given the right conditions, Pom Pom Gracilaria is a fast growing and hardy macro. It is also a great way to export excess nutrients from the reef tank. Red Pom Pom is also great to supplement the diet of tangs. Pods are important players of the aquatic food web but as it turns out, they might play a more crucial role than we have ever realized.

The evidence that this study reveals tells us that the relationship between pods and seaweed is stronger than we realized. This data certainly suggests that a lack of pods may even contribute to decreased growth rates of macro. Although more research will be needed, we appear to be getting much closer to the day when the reef keeper will be able to create a more accurate model of coral reef ecosystems.