You are here: Home / Macroalgae / Pom Pom Macro as a Replacement for Chaeto?

It appears that the chaeto macroalgae (Chaetomorpha spp.) has become what Caulerpa was around the turn of the millennium: The predominate go-to refugium macro. And it really can be great for this purpose. That being said, it has (like Caulerpa) its own set of advantages and disadvantages. In reviewing both the pros and cons of this genus for refugium applications, it becomes clear that, at least for many aquarists, the rhodophyte pom pom macro (Gracilaria hayi) can be a suitable substitute–if not a superior alternative.

In this article, we examine some of the fine points to help you decide which of the two is best for your system. 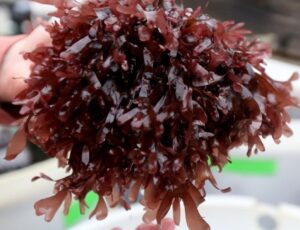 For sure, one of the things aquarists (especially reef aquarists) like about cheato is its ability to rapidly sequester excess dissolved nutrients (e.g. nitrate and phosphate). Just be aware that chaeto doesn’t merely like eutrophic (i.e. fertile) conditions–it requires them. Most green macros (chlorophytes) such as Ulva are the same in this regard. Studies suggest that their high need for nutrients has to do with their relatively high metabolisms. Think of them as your “grow or die” macros. Compared to greens, red macros (rhodophytes) such as Gracilaria have lower metabolisms, slightly slower growth rates and therefore a lower dependency on high rates of fertilization.

Certainly, this is one reason that you hear so many more reports of cheato “melting down.” And, it’s the primary reason that pom pom is preferable as a refugium macro for use in ultra-low nutrient (ULN) systems. But by all means, if you’re struggling with high nutrient loads, opt for chaeto; just know that it’ll only be capable of working its nutrient-removing magic (or surviving, for that matter) under conditions suited for fast growth. This first and foremost requires intense lighting.

Pom pom chills in the shade

A plant’s net productivity is measured by subtracting energy consumed through respiration from energy reserves built up through photosynthesis. The compensation rate is the point where a plant has produced just enough reserve to meet its minimal metabolic demands. A plant with a higher metabolic rate requires greater energy reserves, and therefore must photosynthesize more, and therefore requires more light. This makes green algae–certainly including Chaetomorpha–highly dependent upon brightly sunlit conditions. This happens to be why greens dominate in the high shores (i.e. shallow waters).

In comparison, reds are generally highly tolerant of light deprivation. Part of the reason that they’re red-colored in the first place is that their pigments are so adapted to absorbing blue light (most other light spectra are attenuated before reaching the depths). In other words, in addition to having lower metabolisms, reds are adapted to depth-related light starvation by the efficient light harvesting of their specialized pigments.

Pom pom is a plant and, yes, does require bright light–but not nearly as bright as chaeto requires. This is a distinct advantage for aquarists who either (1) cannot afford super-high intensity refugium lighting or (2) wish to minimize the generation of trapped heat from under-the-cabinet refugia. The slower rate of nutrient uptake can be offset by running a larger ‘fuge (which has other advantages, such as higher pod production) or by incorporating supplemental means such as chemical filtration, increased water exchange, etc. In a ULN system, the nutrient-poor conditions are actually a boon for pom pom.

One thing about Chaetomorpha that aquarists like (as opposed to Ulva, for example) is its rigidity. Its tough fronds help it to keep its shape in high-flow situations. This allows more flow through the refugium, which increases the unit’s overall efficiency and capacities. It surely is one of the reasons that chaeto is so popular for use in enclosed, unidirectional, high-flow devices such as reactor-style algae scrubbers.

Though it’s rarely mentioned, pom pom macro is at least as resistant to compression and is equally suited for these applications. Plus, the ample negative space between its broad fronds allows for plenty of continuous, free, dispersed flow through the entire algal mass (that is, it discourages the formation of dead spots).

Regardless of the algal species used, there are lots of great reasons to install a planted refugium. For example, they make for excellent pod habitat and (when set on a reverse light cycle) help to stabilize pH values over time. That all being said, despite chaeto’s huge and well-deserved popularity, there are other macros that may be ideal for your particular set-up. While resembling cheato in its ability to withstand powerful water currents, pom pom is different in its more relaxed metabolism. Thus, for those aquarists that don’t require sky-high rates of nutrient uptake, its relative hardiness and lower light requirements might be considerably advantageous. Some might even start with chaeto, but then switch to pom pom after nutrient levels have been satisfactorily reduced.

And, some hobbyists even look the way pom pom looks! All in all, pom pom is worthy of consideration when shopping for a refugium macro. AlgaeBarn’s Pom Pom Gracilaria is an especially smart pick, as it is from the CleanMacro line; this not only means that it was cultivated in its own dedicated, biosecure system, but also that every portion is visually inspected by technicians to minimize the risk of hitchhikers as much as reasonably possible!