You are here: Home / Product Info / What’s the Difference Between PNS ProBio and PNS YelloSno?

Reef aquarium keeping has gotten a lot more sophisticated over the years. Fortunately, that doesn’t necessarily mean that it has gotten more complicated or more time-consuming. To the contrary, we now have the knowledge to create convincingly realistic representations of coral reef habitats with surprisingly minimal effort. While it’s true that we’ve now got some pretty impressive equipment at our disposal, most hobbyists are finding that the most successful (and interesting) methods of aquarium maintenance rely on nature, rather than technology.

As hobbyists and aquaculturists experiment with various means to simulate natural processes, the demand for truly useful microbial products (particularly those formulated to improve the environment and diets of captive marinelife) has skyrocketed. This undoubtedly has led to a heightened interest in probiotic microorganisms. Taking cues from fish and shrimp farmers, aquarists have become especially fascinated with purple non-sulfur bacteria (PNSB) such as Rhodopseudomonas palustris.

This only makes sense. These extremely ancient bacteria are a major part of the natural microbial communities in essentially all aquatic ecosystems, including those of coral reefs. They perform a variety of ecological functions that promote diversity and stability in Nature as well as in aquaria. Indeed, their efficacy in aquaculture applications has been scientifically demonstrated countless times. They’ve also been tested for over three decades in commercial operations; given their value in all aquaria, and especially in “natural method” reef aquaria, they are ripe for widespread use by hobbyists.

At a time when the hobby has (understandably) become somewhat skeptical of “bacteria-in-a-bottle” products, the emergence of a fully-identified, naturally-occurring and well-tested aquarium microbe is rather refreshing. AlgaeBarn is thus excited to offer the companion products PNS ProBio™ and PNS YelloSno™ from Hydrospace LLC. We recently have reintroduced the pair as a convenient and economical package, the PNS Product Combo.

Both ProBio and YelloSno are made with R. palustris. And that’s about where their similarities end. Each has its own distinct advantages as a reef aquarium additive. They may be used together. In fact, they are complimentary! This article describes their numerous differences and describes how they may be used in tandem. We shall here provide a brief description of each, starting with ProBio.

PNS ProBio is a live culture of R. palustris. These bacteria are phototrophic and facultatively anaerobic. Thus, while they may inhabit most areas of the aquarium (both in the water 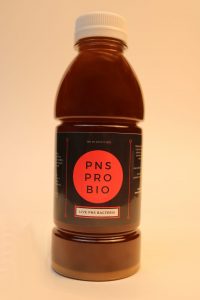 column as bacterioplankton and on surfaces as biofilms), they primarily colonize poorly oxygenated regions of the rock and sand bed where at least a little light penetrates. Though they perform photosynthesis, they can survive in the dark. And while they can fix inorganic sources of carbon (e.g. CO2) much like phytoplankton, they can also use (and prefer) an organic source of carbon. Similarly, while they are capable of fixing nitrogen (an extremely important symbiotic process they carry out with corals), these bacteria prefer to sequester nitrogen from the environment (in the form of ammonia, nitrite or nitrate) when available.

In addition to removing nutrients and dissolved organics from the water, R. palustris has well-proven properties as a true probiotic. For example, it has been highly instrumental in reducing the incidence of vibriotic infections in farmed shrimp. It has also been shown to improve digestion and reduce waste when included in the diets of fish (both larval and adult). It can safely be added directly to any coral food or fish food and is known to survive in the gut for extended periods of time.

Finally, it makes for an incredible coral food. As a matter of fact, corals selectively feed on rhizobial bacteria such R. palustris. Corals, clams, sponges and countless other fine filter-feeders benefit for its high digestibility (unlike phyto, it lacks a cellulose-based cell wall). It is rich in protein (>70%) and contains several essential amino acids. It also typically contains high concentrations of carotenoids, which supply healthful antioxidants and in many cases enhance coloration. Used as a live feed, PNSB are especially beneficial in that they actually clean the water instead of fouling it.

You’ve surely noticed that the waters over coral reefs are nearly crystal-clear. This is because they have relatively low densities of bacterioplankton and even much lower densities of phytoplankton. In the face of this food scarcity, corals and other filter-feeding inverts are quite adapt at harvesting suspended particulate organic matter (POM). Not all POM is nutritionally equivalent. Some POM (e.g. highly mineralized detritus) is virtually useless; in contrast, marine snow is downright wholesome stuff.

Marine snow forms from bits of suspended POM (often poorly digestible materials such as the chitin in pieces of exoskeletons from copepod carcasses) as they become coated with microbial biofilms. Both the polysaccharide-rich biofilm and the bacteria themselves enrich the particles nutritionally. These particulates may become sticky and clump together in calm water or break up into miniscule bits in turbulent waters. They might clump up, break apart and clump together again as conditions change. Larger clumps sink at higher rates and can actually resemble tiny snow flakes (hence the term marine snow). As they fall, they are nabbed (in some cases selectively) by all sorts of creatures as a food source. The POM, which creates a larger bite size, allows creatures (that otherwise couldn’t catch the tiny bacteria) to efficiently consume them.

PNS YelloSno mimics a marine snowfall. It is made from natural sources of chitin which are fermented by PNSB. To prevent complete digestion of the particles by the bacteria, this product is flash pasteurized midway through the fermentation process. Thus, unlike ProBio, YelloSno is not a live product. Indeed, while it has an extensive shelf life, it requires refrigeration during storage (particularly after opening).

Because of the highly copiotrophic conditions (i.e. high availability of organic carbon) in its culture environment, the PNSB do not bother with photosynthesizing to make their own food (and so don’t make much pigment). YelloSno thus has a much lower carotenoid content than ProBio. On the other hand, the culture medium in YelloSno is very rich in vitamins of the B complex (especially B12)–so much, in fact, that a lot remains unconsumed. In other words, in the case of YelloSno, the finished product contains plenty of B vitamins. This is significant because R. palustris is incapable of synthesizing its own vitamin B, and B vitamins are typically scarce in the aquarium environment. Thus, use of YelloSno promotes the inoculation of ProBio.

PNS YelloSno is a straight-up food. As such, it can (like any food) be overfed and does result in the import of nutrients to the system. On the other hand, pairing feedings with ProBio can negate this import, as the live bacteria finish consuming any nutrients and/or POM left over from the YelloSno (they especially benefit from the supplemental B vitamins). Used individually, each food is great; used together, however, they yield even better results over the long term.

There isn’t any harm in feeding these two foods simultaneously. However, we suggest using them on an alternating daily schedule. That is, to feed ProBio one day, YelloSno the next, then ProBio again the next day, and so on (full doses per each use per directions on the bottles). This alternating schedule helps to balance the filter-feeders’ food intake.

Particularly if you successfully establish large populations of R. palustris in the system, you will enjoy high water clarity (i.e. low dissolved organic concentrations) and low nuisance algae growth (i.e. low nutrient concentrations). In this case, you may cut/reduce the ProBio feedings, continuing with just YelloSno every other day. Should signs of excess organics or nutrients return, resume normal use ProBio.

If you suspect that there is not enough habitable space for large colonies of PNSB to grow (as in a deep sand, for example), try adding your next dose of ProBio to a filter sponge, MarinePure block or some other high-surface area medium and drop it into the sump or refugium in an area of lesser flow (preferably where there is some light). If you feel that high nutrient/organics levels are due to high fish loads, try soaking each dose of ProBio into the fish food (as a probiotic additive) before feeding; R. palustris is proven to increase feed conversion (i.e. reduce waste output) when introduced to the animal gut in this manner! 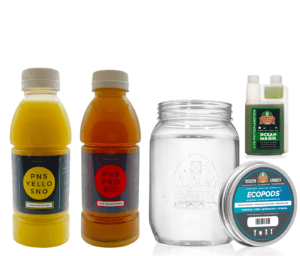 Finally, for even more possibilities/flexibility when integrating these PNS additives into your aquarium feeding schedule, obtain them as part of the Ultimate Ecopack. Particularly for Natural Method aquaria, this pack is hugely valuable in providing the entire base of the reef food web–heterotrophic bacteria, marine snow, four species of phytoplankton and four species of copepods!