You are here: Home / Live foods / A Saltwater Smorgasbord: Using The Ultimate EcoPack

Though they are nowhere near as ecologically complex as actual, wild coral reefs, reef aquaria can be incredibly complicated and downright tricky to maintain in a “natural” manner. To be fair, reef aquarists have to sustain a precarious balance between underfeeding to the point of deprivation and overfeeding to the point of feculent nastiness. Waste products must be eliminated as efficiently as possible. All the while, the biological community is ever changing–mostly growing–making it a constant challenge to feed the many, diverse animals just the right amount of the right item.

Perhaps the easiest and surest way to provide ample, nutritious food to your reef animals whilst generating the least amount of rubbish is to use minimally processed or (even better yet) live foods such as those found in the Ultimate EcoPack. A well-preserved natural food item typically produces less waste, is quite nourishing and is palatable to a wide range of organisms. But live foods carry the distinction of being 100% intact nutritionally and are even more appetizing. And, arguably most important of all, many live foods actually reduce waste.

Wait, live foods can reduce the build-up of wastes in the tank? Some live foods, yes! And this applies to both dissolved and particulate wastes. In this respect, these organisms–primarily tiny plankton–help to control nutrient levels, thereby helping to curb the growth of nuisance algae. Additionally, some even consume nuisance algae!

Bearing all of this in mind, AlgaeBarn brings the entire base of the marine food pyramid to your tank on a platter with the Ultimate EcoPack. This truly unique, cost-effective package offers a virtual buffet of select items for your detritivores and planktivores alike:

No other reef aquarium food package presents a gathering as comprehensive and dynamic as the Ultimte EcoPack. Together, this cohort satisfies the dietary needs of your most demanding reef denizens from the most specialized corals to the finickiest small fishes.

Many marine suspension feeders are adapted for collecting and consuming particulate organic matter. Mainly heavily mineralized leftovers, this material tends not to be very high in nutritive value. Marine snow is a very notable exception to that. Essentially, marine snow is formed from particles of poorly degradable organic debris (e.g. chitin-rich fragments of dead copepod exoskeletons) that have become colonized by nutritious microbes. These suspended particles grow, and then sink out of suspension, as they stick together.

Biological activity on these miniscule particles can become intense enough to deplete oxygen over their surfaces. This leaves an ideal microhabitat for purple non-sulfur bacteria (PNSB), which actually prefer anoxic conditions.

Each dose of PNS YelloSno™ simulates a marine snowfall. Made with a natural chitinous material that is colonized with live PNSB, this product is flash pasteurized to lock in its wholesomeness (protein, B vitamins and amino acids) and preserve its partially photofermented state. Particle sizes range from infinitesimal (e.g. individual heat-deactivated microbial cells) to huge (e.g. flocculated clumps). While in suspension, it is consumed by animals ranging from soft corals to tube worms; when settled into the sediments it is consumed by copepods, sand-sifting sea cucumbers, etc.

Aside from containing purple non-sulfur bacteria (Rhodopseudomonas palustris), the  PNS ProBio™ found in the EcoPack differs significantly from the above. Firstly, this is a live culture, capable of establishing itself in the water column, in the sand bed and even within the guts of animals (as a probiotic). Further, the bacteria it contains exist mainly as free-living, highly motile bacterioplankton.

R. palustris is well-known by aquaculturists for its nutritional, as well as probiotic, benefits. Not only is it quite rich in protein but it also produces copious amounts of color-enhancing carotenoids such as astaxanthin. These very tiny cells are a perfect food for fine filter-feeders ranging from sponges to certain copepods (especially Oithona).

But that’s not all. PNSB are proven to remove ammonia, nitrite, nitrate and phosphate as well as dissolved and particulate organics (e.g. detritus) in both aerobic and anaerobic parts of the aquarium system. The more you feed, the cleaner the tank!

Tropical coral reef waters are characteristically oligotrophic (i.e. nutrient-poor). They thus have limited phytoplanktonic productivity, which is why they are so clear. Despite the relatively low natural abundance of phyto in reef waters (much of which is actually washed in from offshore habitats with the tides), it is a critically important component of reef animal diets, and is included in the EcoPack. This is because it is so rich in essential vitamins and fatty acids. Just like on a natural reef, phyto is quickly consumed in a heavily stocked reef aquarium and should be replenished regularly.

Despite the fact that phyto is such a precious commodity, some phytoplanktivores are quite selective (e.g. for cell size) about the types they will eat. On top of that, different phyto species have different (and not quite complete) nutritional profiles. To solve this issue, AlgaeBarn developed OceanMagik. This live feed is a blend of microalgae selected for complimentary sizes and nutritional content (Nannochloropsis gaditana, Tetraselmis sp., Isochrysis galbana and Thalassiosira weissflogii).

An added benefit of dosing OceanMagic is that this live product takes up dissolved nutrients such as nitrate, phosphate and silicate from the system water as it grows. A food that cleans up after itself!

Stuck in the middle

Regarded as the most abounding animals in the ocean, copepods are ecologically indispensable for their role as food chain middlemen. As key trophic intermediaries, they facilitate the linear trophic transfer of nutrients and food energy from the base towards higher parts of the food pyramid. That is, many vital compounds they consume (fatty acids, carotenoids, etc.) may be passed on to the animals (planktivorous fishes, stony corals, etc.) that eat them.

Though they all might just look like teeny bugs to us, copepods are so diverse in form and behavior that it is common for multiple species to occupy rather specialized niches in the same habitat. This correspondingly supports a greater range of zooplanktivores. Hence EcoPods!

EcoPods is a live seed culture in the ultimate ecopack that contains two cyclopoid (Apocyclops and Oithona) and two harpacticoid (Tigriopus and Tisbe) copepod species. The two species representing each group are of different size classes. The tiny planktonic larvae of both types serve as an excellent food for many corals. The adult cyclopoids, which also are largely planktonic in habit, satisfy the needs of larger zooplanktivores (for example, fishes such as anthias, chromis, etc.). The adult harpacticoids, which are benthic in habit, satisfy the needs of animals that hunt small crustaceans on the seafloor (mandarins, for example); they additionally contribute to your clean-up crew, devouring detritus and film algae.

Absolutely, the live copepods in EcoPods effectively transfer the nutriment of PNS YelloSno, PNS ProBio and OceanMagik to the fish, corals and other zooplanktivores in your tank. By helping to control dissolved nutrients levels and nuisance algae growth, they promote a cleaner, healthier aquarium environment. This makes the Ultimate EcoPack more than just a “combo” package; it’s an entire, synergistic, living chunk of the marine food web readymade for your captive reef. 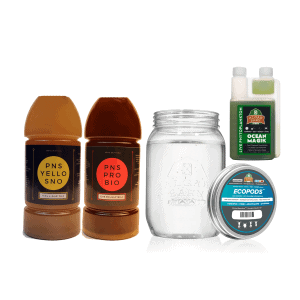 What makes it “ultimate” is that no other pack comes close to meeting so many of your reef animals’ dietary needs so naturally and so effectively. But that doesn’t mean it can’t be enhanced or improved! For a full-on reef feeding frenzy, order a side of Nano Brine with your next Ultimate EcoPack. Gutload the brine shrimp by soaking them in a gallon of tank water with doses of PNS ProBio and OceanMagic (remember to add the air stone!) for one hour before adding to the tank. Also, go ahead and enrich all of your prepared foods with probiotics by soaking them in PNS ProBio for a minute or two before use. The possibilities of cool Ultimate EcoPack feeding hacks–as multiplex as this package is–are virtually endless.