You are here: Home / Corals / Coral Care / A Look at the Chili Coral

Coral reefs arguably are the most diverse habitats on Earth. All major tax are included in these ecosystems. But, as one might expect, corals are especially abundant and species-rich. Of course there are plenty of stony, photosynthetic, reef-building corals there. But soft, nonphotosynthetic (NPS) corals are richly represented there as well. Many of these NPS species rival their reef-building counterparts with respect to beauty of color and form. Therefore, they are highly desirable to aquarists who maintain so-called “mixed reef” systems. That being said, a great many NPS corals are quite difficult to keep. One notable exception to this is the chili coral.

I very rarely write in first person. However, in light of the sometimes conflicting pieces of information regarding chili coral care, much of the following will highlight my own personal observations of the species. 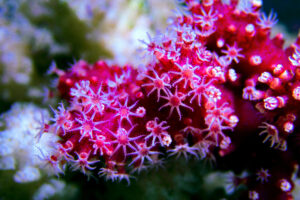 Compared to many other soft NPS corals (Dendronephthya, for example), the chili coral is relatively easy to keep in captivity. In my days of working in LFSs, I can recall at least a couple of instances where an unmounted colony fell deep within the hardscape of a display tank (probably due to expanding/contracting body size at night), only to be recovered (while dismantling the hardscape) months later in apparent good health.

That being said, despite being easy to care for, they still require a lot of time. This is because they often require substantial supplemental feeding in many reef tanks. The extra time required is not just for the actual feeding, but also for performing extra water changes to remove the extra waste.

Target feeding helps to minimize waste. Obviously, some planktonic foods such as live phytoplankton and live bacterioplankton can only be broadcast fed; fortunately, these foods generate little waste. But when using prepared foods (which can generate considerable waste) for chilis and other corals, target feeding is highly recommended. Fortunately, chili corals are quite easy to target feed. Their relatively large, fluffy tentacles easily capture food particles of various size, sometimes curly up around larger pieces and transferring them to the mouth directly (which is always satisfying to watch).

I’ve found Simple Brine to be an ideal food for this species. Brine shrimp cysts are a perfectly big mouthful for chili coral polyps. Most importantly, they are packed with nutrition. And, Simple Brine cysts are decapsulated, which means they are highly digestible and produce less waste. In fact, any stray cysts that aren’t gobbled up by small fish or other corals can eventually hatch and become a zooplanktonic food for yet other aquarium animals. They best way to feed this product is to first cut water flow and then drop the cysts over the coral colony in small bursts. 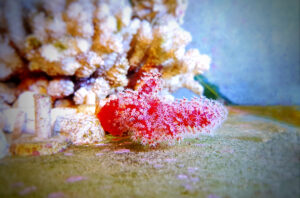 Of course, being NPS, these corals don’t require bright light to survive. Some report that bright light even harms them. I find these reports to be untrue; a very healthy and growing colony that I’m currently keeping is oftentimes fully open even in the direct sunlight that strikes it from a nearby window. This specimen opens and closes frequently, and apparently randomly, throughout the day, regardless of light levels. Even so, a shady spot in the tank still makes best sense for placement in mixed reefs, simply because this leaves the brightly illuminated real estate available for your photosynthetic species. It definitely looks super cool jutting out or even upside down from a ledge, cave or overhang. Just be sure that it is easily accessible for feeding! Moreover, it’s good to keep them away from more aggressive stonies that might sting them.

Reports from the field indicate that the chili coral occurs in areas of strong water flow, and its stout form certainly suggests as much. Aquarium literature often recommends a medium to strong indirect water current for the species. The “indirect” part is critical, as it is said to not fully open in strong, direct water flow. Water currents that hit the glass or nearby rock are ideal. Thus, the “strong” part might be misleading or even technically erroneous. I’ve found that this coral can thrive in lower water movement (even poor movement, as observed in the cases of specimens that were “lost” deep within aquascapes). In other words, lots of flow is good, but it should be as “chaotic” as possible. In my case, controlled pumps generate currents that alternate direction every 20 seconds and seem to do the trick wonderfully.

No mixed reef tank is truly complete without an NPS coral. The chili coral is a hardy and gorgeous choice of soft NPS coral. While I hardly consider my recommendations for this species complete or conclusive, I can report with confidence that aquarists of any skill level can enjoy success with it simply by meeting its most basic requirements:
Heavy feeding and moderate-to-strong chaotic flow. As stated above, frequent feedings ensure that it is getting the nutrition it needs. A wide variety of foods is even better. Turbulent, but random, water flow will keep open for feeding and looking awesome in its fully glory.

Though NPS corals require greater care overall, I can think of few if any better choices for a first attempt with nonphotosynthetic softies!