It’s hard to say for sure which came first for reef aquarists–the emergence of high-quality coral foods, or the realization that corals actually, really, truly do eat them. Though aquarists are generally a skeptical bunch, the initial apprehension to feeding corals is pretty understandable; in all fairness, many such foods sold in the recent past have turned out to be nothing more than expensive phosphate bombs. Still, it is absolutely clear at this point that feeding a coral a nutritionally rich, complete, and well-balanced diet increases its growth rate and builds vigor overall.

Now, obviously, this is the case for corals that we must feed–the azooxanthellate corals. What’s most notable is that this is also the case for zooxanthellate corals. Sure, most of the “photosynthetic” coral species we commonly keep in our aquaria are indeed obligate symbionts. That is, they ultimately depend upon the survival of their symbiotic dinoflagellate partners for their own survival; while these corals can get by without feeding, they can’t get by without their zooxanthellae. BUT, that being said, it does appear that feeding these corals can markedly improve their health and growth.

Great… So, in addition to the sustenance they harvest from their zooxanthellae, corals eat live stuff (plankton) that they catch from out of the water column. So, what is best for feeding corals in captivity?

If your answer is “the same live stuff they eat in nature” then you guessed right!

Alright… So what do they eat in nature? Here’s where we get forced into making some very, very broad generalizations. Corals vary somewhat in diet from species to species; even within a species, diet may vary between regions, seasons, etc. But according to findings by marine ecologists, the diet of tropical reef corals consists primarily of bacteria. Seriously. This has to do primarily with the relative abundance of dissolved organic carbon available in reef habitats. What’s really shocking is the high level of selectivity exhibited by corals (for rhizobial bacteria, for example) in their bactivory. These picoplankton are selected not just for food energy but also for their probiotic qualities and ability to fix nitrogen.

Compared to bacteria, corals consume a surprisingly small amount of phytoplankton. This is because the characteristically low concentrations of nitrate and phosphate there cannot support lush phyto growth. And, only paltry amounts of phyto drift in from the open ocean. It is important, however, to understand that phyto is nonetheless critical for the health of countless coral species; this is because these nanoplankton is a major source of fatty acids as well as essential vitamins such as vitamin C. In other words, a little bit of phyto goes an extraordinarily long way in completing the coral (especially soft coral) diet. Since corals are highly selective in terms of phyto size (and different phyto species vary in size a lot), multispecies blends are preferable when feeding mixed reef communities.

Lastly, some (mainly stony) corals capture and consume copepods. These microplankton can be quite abundant in the reef environment. Reef pods differ substantially from oceanic pods in their diets; as opposed to oceanic pods which mostly consume phytoplankton, reef pods mostly consume protozoa (which mostly consume bacteria). Still, as with corals, a little bit of phyto goes a long way in supporting pod health (especially during their larval stages). Probiotic bacteria and their digestive enzymes enhance the digestive health of their hosts as they are passed along the food chain from protists to pods to corals. 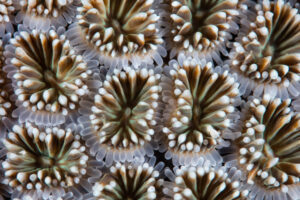 Many aquarium hobbyists are stunned upon learning how significant the contribution of plankton is to the natural diets of corals. It is pretty easy to comprehend how a coral can filter-feed particulates such as marine snow or take up substances such amino acids directly from the water; but complex predator-prey interactions between corals and microscopic bacterioplankton/phytoplankton/zooplankton are pretty mind-bending.

This is certainly the case with suspension feeding. In most of our imaginations, suspension feeding is as simple as a bacterium getting stuck in the coral polyp’s mucus and subsequently ‘absorbed” into the gut. To be sure, it’s a bit more complicated than that.

The epithelium (outer “skin” layer) of corals is covered with cilia. These cilia brush water over the surface of the polyp. This helps to draw in nutrients/oxygen and expel wastes/CO2. It can even help to remove silt and detritus. But it also is used to translocate mucus and, therefore, entrapped food. The cilia of some genera (Turbinaria, Pachyseris, Pavona, etc.) are capable of sweeping mucus into long, stringy structures. As theses tiny nets project into the water column, they very effectively capture bacterioplankton, phytoplankton and even smaller zooplankton. Ultimately, the cilia brush the mucus (and food particles) into the gut; this action is termed intracoelomic feeding.

A lesser-know feeding strategy, termed extracoelomic feeding, uses mesenterial filaments to capture and even digest the item outside of the body cavity. Though we generally think of these filamentous structures as weapons that corals use against each other, they are also important for feeding. Indeed, one study found that Galaxea fascicularis digests nearly all of its prey in this manner.

Finally, most of us are aware of how tentacles capture prey with nematocysts. When a roving pod bumps into a coral tentacle, the stinging cell is triggered and releases a harpoon-like barb into the prey; an attached thread restrains the victim and delivers a dose of immobilizing venom. This mode of hunting is favored by stony corals.

The use of mucus nets, mesenterial filaments and nematocysts may be used in combination by many corals. Some species rely mainly on their mucus by day and their stinging tentacles at night. Some only release mesenterial filaments when exposed to certain cues (e.g. the smell of certain food sources).

In any case, the importance of plankton (in addition to particulate and dissolved organic matter) in the diets of corals is now well-demonstrated. Even photosynthetic corals. These needs can be met with quality prepared diets such as BeneReef–and we indeed encourage their supplemental use. However, no coral foods compare to live coral foods. Consider for example some of the items in AlgaeBarn’s ever-popular Ultimate Ecopack; the rhizobial microbes in PNS ProBio, which are rich in protein and carotenoids, are known to be highly selected for by corals. The four different species of phyto in OceanMagik satisfy the particle size preference of any coral. These live bacterioplankton/phytoplankton commit a bonus act of kindness by removing excess nutrients (such as nitrate and phosphate) from the water until they are consumed. Likewise, before they are eaten, the four different copepod species in EcoPods remove detritus and nuisance algae.

For zooxanthellate corals, lighting that supports their symbiotic algae is paramount. But, in addition to that, an abundance of nutritionally balanced live plankton might maximize growth, vigor and coloration like you’ve never imagined possible!