You are here: Home / Corals / Dealing with Coral Aggression

It is easy to see a reef aquarium as a peaceful landscape for escaping worldly problems. While this is partially correct, corals are not peaceful creatures. The main goal for corals is to spread and gain dominance in an area. To do this, corals have developed rather vicious methods of slowing or stopping the growth of other corals. Coral aggression can be frustrating to deal with in a reef aquarium. You can lose all of your progress overnight if you aren’t careful. This article will cover most of what you need to know.

Why are corals aggressive?

Corals (most of them) are sessile. They cannot simply swim after other corals and attack them as fish can. Because of this, they have evolved several mechanisms to fight for space with other corals. The corals with the best strategy usually end up with the most territory. With aggressive measures, corals can defend against encroaching corals or claim more space.

Why should you care about coral aggression?

Coral aggression may seem like a minor problem if you keep your corals far from each other. This is true to an extent, but usually, the goal is to have a tank full of corals. Most hobbyists aim to see a few patches of rocks and mostly corals. Regardless if this is your goal, it will likely become a reality given the right conditions and time. You may lose some corals if you do nothing to prevent coral aggression. Losing corals is incredibly frustrating, considering the time, money, and effort we put into growing these corals. One can wake up one morning to see that one coral has killed another or several others. Watching your precious corals die at each other’s hands (or tentacles) is disheartening. You can lose months or even years of progress in one night if you aren’t careful.

Coral aggression can be frustrating, but you will know how to deal with it after this article. While it is impossible to make corals peaceful, you can deploy specific tactics to create a seemingly peaceful tank. 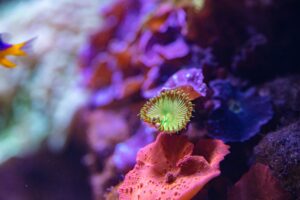 The complicated thing about coral warfare is that there are many different forms. Understanding the various methods corals use to defend and attack is essential to protect them from each other. Not all aggression types are created equal; some are more harmful to particular corals than others.

Let’s talk about the least violent method of coral aggression first. We’re talking about rapid growth. This method is not directly violent but often goes along with other, more violent methods. This strategy involves fighting for space simply by growing faster (J.C. Delbeek & J. Sprung, 1995). Fast-growing corals can shade out other corals or limit flow to other corals.

A perfect example of this is tabling Acropora. While there are other reasons certain Acropora species take on tabling forms, limiting access to light for other corals is a benefit, at least for the Acropora. Acropora are typically fast-growing corals, allowing them to take up more space in less time. Another example of a fast-growing coral is Pocillopora damicornis. There is a reason these two corals are some of the most prevalent corals found in the ocean. Growing faster isn’t as complex as the other tactics but is arguably more effective. Fortunately, this type of aggression is somewhat easy to deal with in an aquarium. Fragging Acropora is reasonably straightforward and is the best way to deal with this. As your corals start to out-grow each other, doing some fragging will help. While fragging can help with this, placement is critical here. Avoid placing corals under each other, even if there is no shading at the beginning. 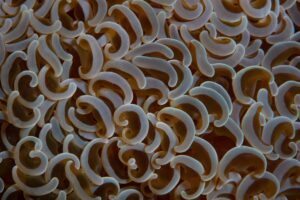 If you see one of your corals attacking another using this technique, there is a chance to reduce the effects of the attack. Use a baster to blow off the filaments gently and move one of the corals (Jake Adams, 2017). Depending on the victim’s species, the attack’s severity, and the duration, the coral may or may not recover. Even if the attack doesn’t directly kill the coral, there is a high chance the coral will succumb to an infection or algal growth. 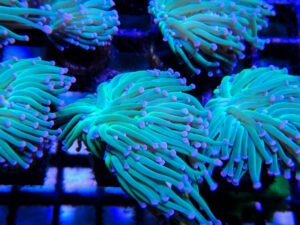 Sweeper tentacles are a popular tactic to attack other corals from far away. Sweeper tentacles are long, thin tentacles with a high concentration of nematocysts at the end. If another coral comes into contact with these tentacles, it often results in severe stings. Many corals release sweeper tentacles, but some do it more often than others. Also, some genera of corals have more potent stings than others. Some corals only release these tentacles when another coral is nearby, while others regularly have these tentacles out. The dangerous thing about this kind of attack is that it can reach corals from a foot away. While this is not something you will commonly see, it is possible. Galaxea, for example, is notorious for its long and potent sweeper tentacles. Other corals that can release sweeper tentacles include Euphyllia spp., Favia, Pectinia, chalice corals, and even Pavona. The best way to deal with this kind of attack is by giving these kinds of corals plenty of room. It is also best to avoid keeping SPS corals near corals known to have powerful stings. A single sting won’t cause too much damage, but several can leave a coral vulnerable to infection. Corals constantly getting stung by sweeper tentacles will likely stop growing altogether.

So far, we’ve discussed attack methods that are most common with stony corals, but soft corals can also attack. Some soft corals rely heavily on their fast growth to out-compete other corals for space, while others take a more violent yet sneaky approach. Certain soft corals are known to release toxic chemicals into the water to slow the growth of stony corals. There is a whole list of chemicals these corals can unleash, but we’re not going to bore you with them. Just know these chemicals are harmful to stony corals. Corals from the genus Sarcophyton, Lobophytum, and Lemnalia are the most toxic. These are the ones that will cause the most issues. Sinularia, Nephthea, Cladiella, and Cespitularia are only sometimes harmful. Capnella and Anthellia don’t release high levels of toxic chemicals and are the least concerning (Than Thein, 2019) . You can do a few things to negate the effects of the corals that are moderately or highly toxic.

First, you can keep a leather coral dominate aquarium. You seldom have to worry about toxicity if you own an aquarium without stony corals. However, maintaining these corals in a mixed reef setting is possible. The easiest thing you can do is run activated carbon on your tank and do more water changes. If you don’t want to run carbon, doing more water changes, at least once per week, will likely be enough. However, if you want to take it further, you could run ozone on your tank. Ozone has the same effect as carbon but to a greater degree. If you are interested in using ozone, do plenty of research before considering buying a unit. 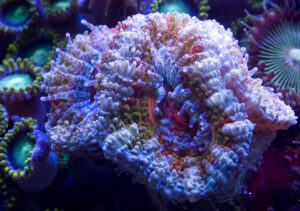 You may have noticed that many of your corals have a mucus layer around them. Some develop thicker mucus when they are stressed. Evidence has suggested many reasons for this mucus, but we are explicitly talking about how it can harm other corals. It appears that anytime two corals touch, they begin to damage each other (Than Thein, 2019). The mucus may cause this. Whether or not the mucus causes it, the point is not to let corals from different species or genera touch. It is crucial to avoid contact with corals that have mucus coats. If a coral with a mucus coat falls on another, both corals may die.

Tips for dealing with coral aggression

You now know about the different defense and attack mechanisms corals have developed and how to counteract them. However, there are a few other tips you should know.

When determining the placement for your corals, there are a few factors you need to consider. You must consider the lighting, water movement, and space from other corals. When corals are small frags, it is easy to give them enough space, but most people want to keep more than small frags. You also need to account for the growth of the coral. Ask yourself if this placement will still be ideal when the coral is several inches larger. Keep in mind the surrounding corals will grow too.

Another thing to consider is compatible species. While many species and genera don’t get along, some do. For example, Fimbriaphyllia divisa (frogspawn) and Euphyllia ancora (hammer coral) typically get along, though Euphyllia glabrescens (torch corals) usually don’t get along with those two. Some species of chalice coral may get along with each other. The difficulty here is identifying the actual species of chalice coral. Different species usually don’t get along, as they are entirely different corals. Figuring out which corals are compatible can help you make smarter placement decisions.

That brings us to the final point: trial and error. Sometimes, you will only know if two corals are incompatible when they start fighting. You may have to apply trial and error when determining how aggressive a particular coral is. While it is ideal to limit coral warfare, it may happen despite your best efforts. Accept this and use it as a learning experience. As you spend more time in the hobby, you will learn how to predict specific corals’ growth and aggressive behaviors, allowing you to make better placement decisions in the future.

Aggression is an important thing to consider when selecting corals and determining the best placement for those corals. This article has given you guidelines for the kinds of attack methods. You may make some mistakes, but this will allow you to learn!