You are here: Home / Copepods / Keeping and Feeding the Fairy Wrasses

In addition to being “reef-safe,” there are a number of attributes that make Fairy Wrasses a great aquarium fish: hardiness, a high activity level, a modest adult size and, of course, vibrant coloration. In these respects, fishes of the genus Cirrhilabrus are ideal. Properly housed and fed, most species in the group adapt fairly well to captivity and are relatively resistant to common marine aquarium diseases.

Members of Cirrhilabrus are often referred to as the fairy wrasses. Representatives occur in the Red Sea, the Indian Ocean and the Pacific Ocean from southern Japan to Hawaii southward to the Pitcairn Islands. They are typically found in small shoals hovering over rubble bottoms or back reef slopes at depths of 3-600 feet (usually 20-160 feet). They congregate most densely where zooplankton, upon which they feed, is most abundant. Groups are normally of a haremic structure, with a single male presiding over a number of females and juveniles. Fairy wrasse shoals often mix with groups of other small midwater fishes such as flasher wrasses, anthias, and damselfish as well as other fairy wrasse species.

Fairy wrasses are fairly small reef fishes, with adult sizes usually falling somewhere between three and six inches in length. They are sexually dimorphic, with males tending to reach slightly larger sizes than females. Males are also more brightly colored and have longer, pointier unpaired fins. Males are able to intensify their coloration or even change their color pattern when courting females or threatening rival males. Fairy wrasses are protogynous, monandric hermaphrodites; that is, they are all born as females with some individuals changing into males during adulthood. This change is generally undertaken by a dominant female. In some species, males appear to be able to change back into females under certain circumstances.

The morphology and behavioral repertoire of Cirrhilabrus is characteristically adapted to a zooplanktivorous lifestyle. These fishes swim up to 20 feet above the seafloor as they snatch zooplankton such as copepods that drift by in swift water currents. Being small and conspicuously colored targets, they are apparently quite wary of predators and ever ready to dash back to the relative safety of the bottom at the earliest sign of danger. Like most small midwater zooplanktivores, fairy wrasses are agile swimmers. Not only do they swim with their pectoral fins (as do their wrasse kin), but they also can push themselves forward through the water by undulating their dorsal fin.

Zooplanktivorous fishes may be categorized as either strainers or pickers. Strainers filter food items somewhat indiscriminately as they move through the water column, whereas pickers 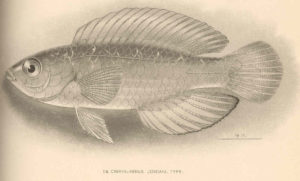 selectively nab food items one by one. Pickers must have several important traits; these include the ability for fast, dexterous swimming and excellent vision. Fish of this type are known to have very large eyes, which gives them the extra visual acuity necessary to see their tiny and often translucent prey. Fairy wrasses are pickers—and indeed very well adapted pickers—but are an exception in that their eye size is pretty close to that of their non-zooplanktivorous relatives. Instead, their excellent vision owes to a highly advanced eye structure. This consists of a round, divided, double pupil. The center pupil seems to act as a sort of fine-focus lens. It is believed that they may possess additional visual enhancements such as high eye ganglion nerve cell densities or a high sensitivity to ultraviolet light.

Because they rely so much on sight for feeding, fairy wrasses are strongly diurnal in habit (i.e. are active mainly during the daylight hours) and stick to fairly shallow, clear, well-lit waters. At night, they secrete a thick mucus cocoon. The cocoon serves to hide their presence (especially their scent) from nocturnal predators as they sleep. While sleeping (or when stressed), they may take on a blotchy body pattern.

More and more species of this fascinating group are becoming available to marine aquarium hobbyists with each passing year. Despite their sometimes big price tag, they remain popular. Aquarists have learned that while they are reasonably amenable to captive life, fairy wrasses do have certain husbandry needs that must be addressed. The most important of these is providing ample open space and a continuous food availability.

Though they are smallish in size, fairy wrasses are hyper and flighty fish that require a substantial amount of swimming area. A tank size of at least 55 gallons is recommended; something larger might be needed if too much open swimming space is displaced by the rock and corals. Whether due to excited feeding activity, courting displays or fright, it is all too common for these fishes to fling themselves from the tank. Thus, it is highly advisable for anyone keeping a fairy wrasse to keep a tight cover on the tank at all times.

Though they are reported to accept a fairly wide variety of aquarium foods, it may be especially beneficial for these animals to have regular access to a live, natural food item. That, of course, is zooplankton. A major component of the zooplankton in coral reef environments (and surely of these fishes’ diets) is copepods. So, obviously, copepods should be the first choice of food for these and all reef-associated zooplanktivores. Copepods are naturally appealing to the animal, are highly nutritious, have color enhancing properties and contain just enough roughage (i.e. chitin) to help them maintain a healthy digestive system. So why live copepods? Live copepods are arguably more nutritious. Due to their swimming movements, they elicit an especially strong feeding response from the fish. And, because they swim, they do not (unlike dead foods) sink to bottom. The greatest benefit of live foods for fairy wrasses, however, is that they can remain in the tank for much longer—indefinitely, in fact, if breeding pod populations become established. This is important because like so many zooplanktivorous fishes, fairy wrasses are built for continuous feeding throughout the day. They cannot handle pounding down huge meals between long periods of eating nothing. That is why, in tanks where the aquarist feeds once or twice daily, these fishes eventually lose weight and become ill. While such feedings might be great to supplement this active animal’s diet, it is far better to have a standing population of a free-living live food such as Apocyclops copepods (e.g. Apocalypse Pods) in the tank for them to pick at throughout the day. The benthic Tigriopus copepod (e.g. Tig Pods), which has a habit of jumping into the open water column, will surely be taken as well.

After the health of the fish, maybe the most compelling reason to use live pods to feed one’s fairy wrasse is for the opportunity to see the animal pursue and capture its minute prey as it would in the natural reef environment. Watching this highly advanced fish hone in on and pick its prey is surely more exciting than watching it lazily and halfheartedly bite at flakes as they fall to the tank bottom! Best of all, the fish will be as plump, healthy and beautiful as it ever was on the reef.

[3] Michael, Scott. “Do You Believe in Fairies? Fairy Wrasses of the Genus Cirrhilabrus.” Reefs Magazine. Spring 2012.