You are here: Home / Company News / A Look at the NEW OceanMagik 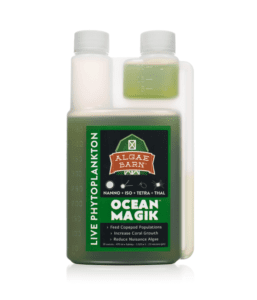 It’s amazing how much has changed in the reef aquarium hobby since 2012. During that time, we’ve seen a surge of aquarium info resources on social media, a deluge of new designer strains of stony corals, soaring attendance at trade shows (at least until this year’s pandemic), revolutionary aquarium monitoring and automation devices, big advancements in planted refugium techniques, an ever-growing list of aquacultured species, and more. Through all of this, AlgaeBarn’s flagship product OceanMagik has emerged as one of the industry’s most trusted blends of live phytoplankton. Yet, it has remained essentially unchanged over these last momentous eight years.

Wisely, when it comes to the OceanMagik recipe, the biologists and technicians at AlgaeBarn have adhered to that old, sagacious motto “don’t mess with a good thing.” Sure, there have been some improvements made here and there–little tricks to improve density, vitality, and so on. But, finally, a significant change to the time-honored formula is cropping up on the horizon. And we’re extremely excited to tell our patrons all about it!

Let us begin with the most salient points here. The one thing that will never change is that which OceanMagik is meant to be–a nutritionally balanced live phytoplankton culture of varied cell size that is as fresh, viable, and readily adaptable to aquarium conditions as possible.

With that in mind, let’s just acknowledge here that there are no single, perfect phytoplankton species. Given the different nutritional demands and feeding requirements of diverse marine life, there isn’t even a truly perfect blend. It is possible, however, to strike a reasonable balance by carefully blending the “right” cohort of species in the “right” proportions to meet the basic needs of a wide variety of captive animals. Such a balance, we believe, was achieved with OceanMagik. This unique blend formerly included the following:

The reasons for this switch are three-fold:

When it comes to nutrition, we see a slight improvement. In comparing overall nutritional profiles, the two are rather close in gross protein and lipid content. PHAEO is, however, substantially higher in energy-yielding carbohydrate content.

All About the Benefits of Phaeo

These two diatoms differ much more markedly in how they behave, as a live product, in the “normal” reef system. Despite the high silicate concentrations and benthic diatom blooms we so often see in new systems, silicate levels in many established systems are insufficient to maintain strong planktonic diatom growth. This can limit the growth/reproduction of THAL, causing it to cease uptake of nitrate and phosphate from the environment. PHAEO, on the other hand, can survive when silicate is almost completely depleted. In some studies, it was believed to live solely off of the minuscule amounts of silica that dissolved from the glass container! While PHEAO indeed takes up silicate aggressively in times of abundance, it nevertheless continues to grow in times of scarcity. Its tolerance of low silicate availability comes from its ability to build a silica-free frustule (rather unusual among diatoms!). 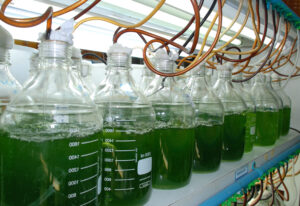 PHAEO is additionally more tolerant of iron deficiency than THAL. This matters in many aquaria (particularly those with refugia), where iron is quickly depleted and seldom replenished. PHAEO has been shown in the lab setting to survive in cultures with iron concentrations 50 times lower than those required by THAL.

Even more importantly, the two differ in how they respond metabolically to seawater-strength salinity. Both are characterized as brackish species for the reason that they occur predominantly in estuarine environments. In waters with salinities that exceed 25 ppt, THAL progressively declines in productivity and even loses protein, carb, and lipid content. PHAEO, in contrast, seems not to mind full-strength seawater at all; indeed, in some studies, it is shown to fully thrive at 35 ppt.

Finally, our own first-hand experience has revealed that PHAEO better tolerates bottling than does THAL. This means even fresher, more viable cultures and extended shelf life!

It’s hard to deny that the first version of OceanMagik had a great run. As evident by the loyalty of thousands of hobbyists who swear by it, it certainly was a great blend to begin with. But AlgaeBarn is an innovator in its field. As such, when opportunities to appreciably improve our products become this evident, we take them.

Even considering all the progress made in the hobby over the last eight years, we believe that it can go much further. And we’re humbly confident that this latest refinement we’ve made to OceanMagik is, at least, one small step in that direction!

Happy Colorado Day! As a Colorado-based company, we are very proud to serve the people that have helped us succeed and allowed us to grow. Many of the