You are here: Home / Phytoplankton / Tetraselmis: The Big and Fatty Alga

There is probably no single type of microalgae that is ideal as feed for a varied community of captive animals (such as a reef tank). Thus, the best phytoplankton-based aquarium foods are really blends, carefully formulated to meet the dietary needs of diverse creatures ranging from copepod nauplii to suspension-feeding tube worms. Sometimes candidates for these blended feeds are selected on the basis of their cell size (i.e. bite size), while others may be selected due to an abundance of an essential nutrient that is lacking in the other species used. Some are especially good at sequestering excess nutrients from the aquarium water. Some are simply easy to keep alive under typical aquarium conditions. Sometimes, a candidate might bring something completely new to the table, such as a unique and highly beneficial micronutrient.

For the reason that microalgae of the genus Tetraselmis are so well-rounded in terms of these important considerations, they remain among the most used microalgal feeds in aquaculture as well as in the marine aquarium industry. So nutritionally balanced, it is often used alone in the production of shellfish and larval shrimp. Still, because of some of its more unusual beneficial qualities, it is often included in premium mixed phytoplankton feeds. 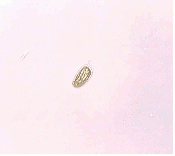 Tetraselmis is a chlorophye (i.e. green algae) of the order Chlorodendrales. Even for a green alga, it is of an intense, bright greenish hue. Each individual bears a single, fairly large chloroplast. Representatives of the genus can be found in both freshwater and marine environments and are known to be quite adaptable under varying conditions. At least for a unicellular alga, it is fairly large in size (to around 14 microns). For this reason, it has been used effectively to feed (that is, gut-load and enrich) larger free-swimming pods and brine shrimp. While different Tetraselmis species vary in shape, round and ovoid shapes are common. It may bear a reddish “eye” spot. All members of the genus are characterized by having a multi-flagellated cell wall. Four individual flagella project from a small groove at the anterior part of the cell (in most other multi-flagellated algae the flagella are arranged in pairs that point away from each other). The flagella are of equivalent length and are shorter than the length of the cell body. Because of the particular arrangement of its flagella, Tetraselmis has a singular mode of swimming; it moves quite rapidly and oftentimes appears as shaky, tending to move in a straight line before abruptly changing direction. Its swimming behavior and physical structure resemble members of the genus Pyramimonas to which it is most closely related.

Tetraselmis has a considerably complicated life cycle for a single-celled plant. All members of the genus undergo a three-stage cycle, including a flagellated, vegetative (i.e. nonmotile) and cyst life phase. There are only minor morphological differences between the flagellated and vegetative phases. In the majority of species, the vegetative phase is most prevalent. When entering the cyst phase, flagellated cells drop their flagella and develop a thick, protective covering. These cysts are much like seeds that may germinate at a later time when environmental conditions are favorable. It is, however, possible for the cell to develop flagella and become motile at any life stage. Reproduction only takes place during the nonmotile, vegetative stage. Cell division produces a pair of daughter cells (most Tetraselmis carry out only a single division cycle). Depending upon the prevailing environmental conditions, daughter cells may develop directly into either flagellated or non-flagellated cells.

Despite its complex reproductive tactics, Tetraselmis is known to be a prolific grower. Owing to its ease of culture and high growth rates, the genus has become important in the lab as a model organism for plankton researchers and cell biologists. It has been proposed as a potential biofuel. It is also grown for food; though it has been speculated that Tetraselmis could be a highly nutritious, cancer-fighting superfood for humans, at least for now it is primarily produced as a feed for various phytoplanktonic marine animals.

As an aquarium food, Tetraselmis is prized for it high lipid content. It is especially high in levels of the vital fatty acids EPA and DHA. It is also rich in certain amino acids (e.g. alanine) that promote high growth rates as well as serving as a kind of marine animal appetite stimulant. It is a good source of vitamin C and vitamin E. Better still, it has enough stores of carbohydrates (over 48 calories per 10 ml biomass) to meet the metabolic energy needs of the animals that feed on it. Carbs can amount to around 27% of its dry weight. The starches it produces are quite similar to those synthesized by land plants. Tetraselmis even has loads of color-enhancing xanthophyll carotenoids (e.g. neoxanthin, antheraxanthin, violaxanthin, and lutein), which may benefit the feeding animal by scavenging dangerous oxidizing molecules. 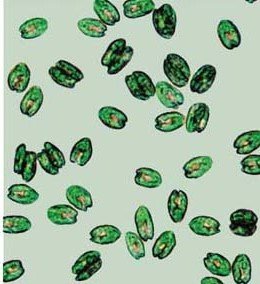 compounds. Certain phenolic constituents are believed to be responsible for the antimicrobial effects of algal extracts. Supernatants and extracts of Tetraselmis suecica have been shown to resist infection by pathogenic bacteria such as Aeromona, Staphylococcus and Vibrio in fish, as well as reducing the populations of these microbes living freely in the tank water. There are probably many possible ways that these chemicals could be used in the disease prevention of captive marine animals. For example, gut-loading brine shrimp with Tetraselmis just prior to feeding could serve to protect seahorses from Vibrio infections, to which they are especially prone.

While showing clear potential for new uses by aquarists and aquaculturists alike, Tetraselmis is already firmly established as an industry staple in quality live feeds such as OceanMagik. With a well-balanced nutritional profile and a high content of growth-spurring amino acids and energy-fueling carbohydrates, its use can greatly improve the health of filter-feeding invertebrates (such as corals, feather duster worms, clams, etc.). It can similarly improve the nutritive quality of live foods such as brine shrimp and copepods. Its larger cell size makes it ideal for phytoplanktivores that prefer slightly bulkier particles. On the whole, there is hardly a reef tank out there that wouldn’t benefit greatly from having Tetraselmis included in the phyto-feeding regimen.