You are here: Home / Captive Bred Fish / A Look at the Banded Pipefish

So many marine aquarium fishes can be exciting to watch; some are big and belligerent, some are beefy and bullish, some are lightning fast, some are deadly venomous and others are armed with sharp teeth or spines. Even many of the fish we keep in the conventional reef tank can be downright predatory or aggressive, and thus might (for better or for worse) keep us at the edge of our seat. While these tendencies are entirely natural and quintessential to survival in the reef environment—and oftentimes fascinating and entertaining to observe—they can be a drain on the aquarium keeper. Wherever these fishes are kept, scars, shredded tails and even MIAs are almost inevitable. As such, it is perhaps not very surprising that many aquarists would seek to establish a peaceful—even convivial—community of fishes in their systems.

Certainly, the tranquil scene created by a group of colorful fishes harmoniously bobbing and gliding about in a placid environment would be a welcome change for many hobbyists; this is particularly so for those who enjoy watching their tank after a long, frantic, contentious day of work. More and more so, fishes of this kind are becoming available in the trade. In contrast with those more brutish, carnivorous types of fish that crave flesh, these mellow fishes are content to nibble on microfauna such as copepods. Of course, because their food items are so tiny, they usually require many of them. And, they sometimes need to feed over extended periods of time, if not all-day long. Hence, it is the increasing availability of live aquarium “pods” (and the live phytoplankton that sustains them) that is largely responsible for many recent successes with these relatively tranquil fish species. 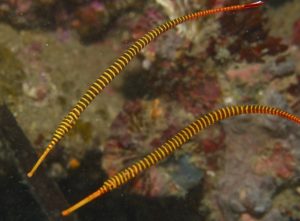 (Doryrhamphus dactyliophorus). This striking animal was once considered to be a difficult-to-keep species. Why? Because it tended to slowly waste away in captivity due to starvation. Since it generally eats only live foods, early attempts to keep it involved the exclusive use of newly hatched brine shrimp. And this was a good start, as brine shrimp are attractive to these fish, of an appropriate size, easy to catch and considerably nutritious. Still, most hobbyists had trouble keeping just the right amount of brine shrimp in the tank—every hour of every day—as to meet the animal’s dietary needs without fouling the system waters. Real success only came after they came to understand the importance of microcrustaceans in all marine ecosystems, including captive ecosystems. Once aquarists began to boost and diversify their pod populations (and commonly install refugia where these tiny creatures could hide and multiply), “touchy” fishes such as seahorses, mandarins and indeed pipefish “miraculously” flourished and even reproduced in captivity. Now, at least one hatchery is producing the banded pipefish on a commercial scale. Presumably, these captive-bred specimens are (like those of so many other species) even better adapted to life in the home aquarium system.

The pipefishes are members of the family Syngnathidae. As with their seahorse brethren, males (but not females) are equipped with specialized brood pouches. The pouch may be found either on the tail or on the abdomen, depending upon phylogenetic lineage. Also, syngnathid pouch complexity varies somewhat, ranging from simple ventral adhesion to being completely enclosed. Male banded pipefish bear an enclosed pouch. Following a brief courtship, females deposit the eggs into the pouch. After developing for some time, the male “gives birth” to the brood. After they are released, they receive no further care. The newly-released young immediately begin feeding on tiny crustaceans.

Reaching a maximum length of 19 centimeters (7.4 inches), the banded pipefish matures into a very beautiful creature. Long and slender, it very closely resembles a straightened-out seahorse. Its base color is cream or off-white. Dark, reddish-brown bands ring the animal from head to tail. The tail is mostly covered by a bright red blotch. The blotch is outlined in white, and may additionally have a white spot in the center. Though its color pattern may appear to be somewhat gaudish, some suggest that it actually serves to camouflage the animal in its natural weedy habitat.

This species has much to offer the marine aquarist. Aside from being extraordinarily attractive in shape in coloration, it is quite peaceful. This mild-mannered—even sociable—animal can be kept in pairs or groups. It gets along well with similarly sedate fishes such as dragonets and seahorses. Provided that they are not aggressively territorial, certain gobies and blennies can likewise be excellent tankmates. Pipefish should not, however, be kept with stinging anemones and pinchy crabs.

The aquarium environment for a banded pipefish should be less like an exposed reef and more like a lagoon. While they are stronger swimmers than seahorses, they prefer weaker water currents. They like cover from macroalgae, where they will spend much of time foraging for pods. If rocky materials are included in the aquascape, a sheltered cave will be greatly appreciated.

Foods and feeding are undoubtedly the most critical aspect of this animal’s husbandry. Their guts and feeding behaviors are adapted to the lifestyle of a constant nibbler; thus, an ample and appropriate food source should be available to them throughout the entire day. Tisbe, Tigriopus and Apocyclops copepods have all been recommended as a food for this species. Products that contain all three of these pods, such as 5280 Pods, will provide complete nutrition and a wide range of feeding opportunities; this live product can be added as needed to establish and maintain high pod densities. Live brine shrimp products such as Nano Brine can be used on occasion as a supplement to beef up the animal. Live phytoplankton products such as OceanMagik can be used to nutritionally enrich both the pods and the brine shrimp; it may be added directly to the tank for enrichment of the pods, whereas brine shrimp can be enriched in a separate container just prior to use.

With the right diet, environment and tankmates, a banded pipefish can be enjoyed by its keeper for several years. Really, there are few fish species that are so perfectly suited for a serene, slow-paced, soothing marine aquarium display.