You are here: Home / Advanced Education / Trophic Structure in the Reef Aquarium Part 4

Proper stocking procedure can have a huge long-term impact on the health of your aquarium system. That’s why proper order of stocking is so important. For example, after certain groups of beneficial microbes (as described in the last article of this series), copepods are among the first organisms to stock. These tiny crustaceans are an essential part of reef foods chains. In aquaria, the adults of benthic species are invaluable herbivores and detritivores; their pelagic larvae are a nutritious food source for zooplanktivorous filter-feeders. A refugium full of fast-growing fleshy algae such as Gracilaria promotes large and stable copepod populations. 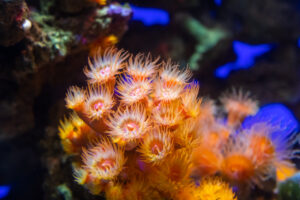 Before proceeding, it is best to allow the reef base to mature such that there is clear recovery and growth of filter-feeders. This can take as long as a month or so. Lights over the main tank should remain off (however, if in use, planted refugia should be brightly illuminated). Depending upon the types of filter-feeders present, it might be a good idea to begin offering modest feedings of phytoplankton or some other suitable liquid invertebrate diet; this can accelerate the growth of both live rock organisms and copepods.

After the pace of successional activity over the rock and in the sand have appeared to slow down, and both nitrates and phosphates have for long remained below detectable levels, it is time to build the surface (i.e. illuminated) portion over the reef structure. This rock will ideally be covered predominantly with small zooxanthellate cnidaria, coralline algae and slow-growing macroalgae such as Halimeda. As with the reef base, it is crucial that this entire area receives strong water movement. Now, the lights over the main tank can finally be cranked up.
This is not the time, however, to add large coral colonies. There might be some die-off on the new rock; due to the inevitable changes of flow pattern that will occur by adding the new rock, there could even be minor die-off within the reef base. The resulting spike in dissolved nutrients, combined with the bright lighting, could spur undesirable algal blooms. Evidence of steady coralline algae growth (and a lack of nuisance algae) will be good indication that the system is ready for coral stocking.
Large sea anemones are best introduced during the earliest phase of coral stocking; they might wander a bit until they find a suitable residence, and will, at this time, be able to do so without stinging anything in their paths. Soft corals are likewise best added now; a little time will reveal how much space they will occupy when fully expanded. Assigning space for stony corals (and their eventual growth) is even more consequential in terms of designing the definitive reef structure and should therefore involve a good deal of forethought.

Let us recall some of the less ideal schemes for reef development presented in the first three articles of this series and consider what you have thus far avoided. You established a complex, yet stable, community of microbes. You introduced a diversity of filter-feeders/detritivores and nurtured them. Ecological succession has occurred in a relatively slow and gentle manner, preventing the emergence of hardier, dominant species (i.e. pests). Because a highly dynamic food web has developed at the lower trophic levels, dissolved nutrients are efficiently transferred to, and locked up by, desirable organisms. By deferring fish introductions, you avoided nutrient spikes that might have led to difficult-to-eradicate film/turf algal growth. Free from intense competition from these benthic algae, your coral population has flourished. With reef-building corals acting as the major primary producers, you have assembled a plausible simulation of a natural reef environment. Now, with this foundation firmly established, it is at last appropriate to begin stocking higher animals, including fishes.
We have stressed throughout this series that aquarium systems do not function quite like wild ecosystems. Perhaps the greatest discrepancy is that in artificial environments, top consumers (e.g. fishes) are sustained primarily by food sources that are produced from outside, rather than from within, the system. Sure, a dragonette might obtain most of its nutrition from a resident population of live microcrustaceans. Or plant biomass grazed from the rocks might make a noteworthy contribution to a surgeonfish’s diet. But, for the most part, we feed.
On a natural coral reef, nutrients and food energy moves through the food chain in a bottom-up manner. For example: Zooxanthellae convert dissolved nutrients and carbon dioxide into organic compounds such as proteins and fatty acids. The coral host consumes these compounds, much of which it converts into mucus. As this mucus is exuded, it is consumed by heterotrophic bacterioplankton. The bacteria are consumed by sponges. The sponges are eaten by fishes, which might in turn be preyed on by larger fishes.

Trophic: From the top

Yes, some exchanges of this sort will take place in an aquarium. What is different in an aquarium, however, is that fish density is not limited by the system’s net primary productivity. This, rather, is determined by the whim of the keeper. In other words, the tank may be stocked well beyond the system’s natural ability to nourish them. Extra fish just means extra feeding. This has an undesirable consequence: Extra waste. Nutrients and energy contained in fish foods do not just disappear after they are eaten. Rather, aside from being converted into heat, they are mostly transformed into respiratory and excretory products. 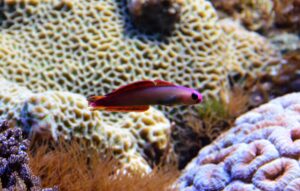 Where there is a well-developed trophic community of microbes, filter-feeders and detritivores in the sand bed and on the live rock, excretory wastes are cycled quite effectively. But there are limits to the rate at which these inputs can be processed. Once these limits are breached, concentrations of dissolved nutrients and organic compounds will rise rapidly. Water changes and chemical filtration will consequently be required to prevent problems such as algal blooms, low pH, and so on. That is, excesses of these substances must somehow be ‘exported‘ from the system.
This all amounts to what we could call a top-down trophic structure. Stocking fish (or any other higher animals that require direct feeding) in a natural aquarium is a necessarily long process. “Clean-up crews” and larger scavengers (e.g. deposit-feeding sea cucumbers) are best introduced just before adding fish. Of course, many of these organisms will need to be offered supplemental feedings during early stages while the tank is “clean.”
In order to ascertain the impact of each specimen on the trophic chemical and biological balance of the system, a wait time of a month or longer should elapse between major acquisitions. Stocking should come to an immediate halt if microalgal growth or detritus accumulation becomes evident. If a couple of big water changes do not correct these issues, the fish population will likely need to be reduced. Here, fewer is much better; a system stocked with a handful of shrewdly selected fishes is not only easier to manage than one that is cramped, but it will also have a more naturally beautiful appearance.

Naturalistic trophic marine aquaria can be challenging to construct. They require considerable experience. They require a lot of planning. And, they may test our patience or willpower. That being said, they are also the most fun and downright interesting systems to be built. As with a finer wine, some additional attention to maturation and balance can generate a big pay-off. Having carefully constructed a microcosm that culminates in the development of a biologically rich and largely self-sustaining climax community, a natural aquarium keeper might easily scoff at another hobbyist’s troubles with “old tank syndrome.” Undoubtedly, being cognizant of fundamental ecological concepts such as succession and trophic structure can help a reef aquarist to sidestep some common problems while building the healthiest, most eye-catching reef tank they might imagine.