You are here: Home / Other / Trophic Structure in the Reef Aquarium Part 2

Part one of this series took a brief look at the different levels of the Food Pyramid. So, why does it so often look like a pyramid in the first place–with large amounts of biomass at the bottom with teeny amounts at the top? Due to inherent losses/inefficiencies, transfer of productivity from one level up to the next is never complete.

This article gives reef aquarists a feel for food energy budgets in their system.

Food energy losses occur due to two factors: (1) non-consumptive losses and (2) conversion inefficiencies. In the first case, some of the productivity from one trophic level is never eaten in the next. This could happen for a number of reasons; some examples include sloppy feeding or unpalatability of prey (e.g. being  poisonous, noxious or spiny). In the second case, food energy is diverted from growth to meet metabolic needs. Little food, in fact, is ever available for growth. A straightforward food energy budget, where I is the quantity of food ingested, E is the quantity egested, R is the quantity used for respiration and G is the amount left over for growth/reproduction, can be expressed as: 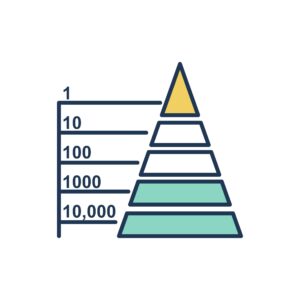 Energy enters an ecosystem primarily as light and exits as respiratory heat loss; thus, it is most correct to say that energy flows through, rather than cycles within, a coral reef. According to the energetic hypothesis, the relative shortness of food chains can be explained by inefficiencies of food energy transfer. Generally, only 10% of the energy stored in organic matter can be converted to organic matter (i.e. growth, maintenance and reproduction) in the next link in the chain. The rest? Waste. An organism’s production efficiency includes all food energy that is not used during respiration. In other words, it does include fecal excretion. Why include solid waste? Feces will be consumed by detritivores, so its energy is not yet lost from the system (this is why detritivorous animals and microbes should never be overlooked). The number of links in a detrital food chain will appreciably influence mineralization dynamics.

Because it accounts not only for non-consumptive losses and respiration but also for all excretions, trophic efficiency, E, will always be less than production efficiency. Depending upon ecosystem characteristics, trophic efficiencies usually range from 5-20%. The highest energy transfer efficiency for a growing juvenile animal might be around 35%, while that of a fully-grown adult will be far less. Approximately 80-95% of available food energy is lost in transfer between trophic levels. These losses are amplified with increasing food chain length. This means that something like one tenth (10% of 10 %) of net primary production will be available to secondary consumers.

Using E as trophic efficiency, B as the biomass of primary producers and n as the number of links in the food chain, we may calculate P, the maximum supportable production of fish:

Let us remember, though, that living animals need a balanced diet that includes specific pre-synthesized compounds such as vitamins and amino acids—not just energy. The nutritional value of a food is not necessarily equivalent to its energy content. Therefore, as we proceed, it will be important to keep in mind that energy is associated primarily with carbon cycling whereas nutrients are associated primarily with the cycling of nitrogen and phosphorus.

All they can eat

While differences of gross energy at each trophic level result in decreasing food mass up the ecological pyramid, they do not result in decreasing food quality. To the contrary, the available energy content of food items increases at higher trophic levels. For example, a fish that eats a smaller fish will acquire considerably more calories per unit mass of food than will a fish that grazes on macroalgae. An herbivore consequently must take in more food than a predator of equal size and activity level to meet its metabolic energy needs. Eating more or better does not necessarily mean faster growth; both herbivores and carnivores are strictly limited in their ability to convert food protein to body protein. So, in consuming enough food to satisfy its basic energy/growth requirements, an animal can easily exceed its need for certain substances. These imbalances can lead to a relatively high production of excretory waste (e.g. feces or ammonia/urea). 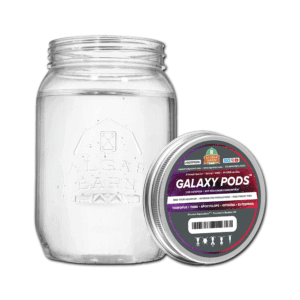 Owing to characteristically low trophic efficiencies, an organism will return far less food to lower trophic levels upon death—through its carcass—than through its lifelong production of wastes. Ammonia is taken up during primary production by chemoautotrophs (e.g. nitrifying bacteria) as well as photoautotrophs (e.g. algae). Oxidized products of nitrification such as nitrate will likewise be used by photoautotrophs; nitrate might also be utilized by denitrifying bacteria. Detritivores/decomposers mineralize most fecal matter into inorganic substances (i.e. ammonia and other nutrients) that will be used by primary producers. Along the way, particulate organic matter is degraded to dissolved organic matter. Aerobic decomposition (mainly by heterotrophic bacteria) converts these fixed carbonous compounds to carbon dioxide. Some pathways in the trophic stream, however, can lock up significant quantities of carbon and nitrogen at lower trophic levels.

The activities of a certain group of microorganisms are known to greatly increase the efficiency of food web dynamics. This pathway, referred to as the microbial loop, recycles organic matter within a pool of soluble detritus. In diagrams, this pathway is shown as an extension of, rather than part of, the ecological pyramid. Dissolved organic matter supports the growth of planktonic, heterotrophic bacteria. Bacterioplankton are capable of sequestering dissolved carbohydrates, amino acids and peptides; as they proliferate, they convert these substances into a particulate form of food that supports the growth of filter-feeders as well as larger zooplankton such as protists and copepods. The microbial loop is of considerable importance in oligotrophic environments such as coral reefs, where phytoplankton are relatively sparse and have a limited influence on carbon cycling (for more information on these microbes and their ecological impact on reefs, see The Carbon Continuum: Heterotrophic Bacterioplankton and Reef Food Webs).

Central to the concept of the microbial loop is viral infection. Viruses are  probably the most abundant biological entity in the marine biome and are responsible for heavy mortality among bacteria and other unicellular organisms. Infection results in the rupture of the cell, spilling its contents into the surrounding waters. These microbial “blood and guts” are simply eaten by uninfected bacteria. Thus, a substantial amount of food energy is retained within the microbial community as opposed to being immediately passed further up the food chain. Despite the constant viral assault, this mode of food salvaging coupled with rapid reproduction can maintain very high bacterial densities.

As above, so below

Major changes to one trophic level can not only affect the next level, but the whole food chain. This phenomenon is referred to as a trophic cascade. A bottom-up cascade occurs when major changes to primary production alter top levels; a top-down cascade occurs when the addition or removal of a top predator alters lower levels. In a classic example of a top-down cascade, overhunting of seals once led to greater numbers of their prey, sea urchins, which then resulted in the loss of kelp forest due to overgrazing by the urchins.

An individual species—even an individual organism—can have a major impact on the ecology of these tiny habitats we call aquarium systems. Adding a refugium full of macroalgae can promote large populations of copepods and amphipods, eventually allowing for the addition of microcrustacean-eating fishes such as mandarins. Adding a harem of anthias (and having to feed them heavily) might tip the nutrient balance, causing a bloom of hair algae that chokes out corals and other benthic invertebrates. Really, adding just about anything to a reef tank can have unforeseen consequences.

When stocking, appropriate timing and proportion can make all the difference between a naturalistic reef environment and a biological catastrophe. In the next two articles of this series, we will present a stocking sequence that just might help aquarists develop a proper “slice of reef” with minimal trouble. In the least, we hope to bring more attention to the merits of natural reefkeeping methodologies! Additional information of this topic, as well as on food chains/webs (with a focus on refugia), can be found in the Jul/Aug 2022 issue of Coral Magazine.