Welcome back to our series on building bulletproof refugiums! At AlgaeBarn, we have gotten so many great questions on refugium design and maintenance in the recent months. In response, we decided to create a series on the AlgaeLab Blog to go over some of our favorite refugium tips. In this post, we are going to discuss one of the most important factors for building a stable refugium – water flow!

Variables that affect water flow rates in the refugium

The ideal flow rate for a refugium will depend upon the goals for the refugium. Do we desperately need rapid nutrient export? Or do we have finicky fish that need to have access to more live foods like copepods? The growth rates of macroalgae, and the refugium’s overall capability for nutrient export, are strongly influenced by water flow parameters. 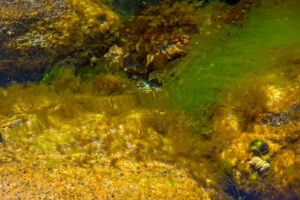 One of our goals for the refugium is to regulate excess dissolved nutrients in the reef tank system. For example, if we have a system with consistently high nitrate (over 50ppm), we might want to try growing Chaeto in the refugium. Remember in our post on macroalgae, we talked about Chaeto and why it is one of the best varieties of macro for systems with dense fish populations and high nitrates.

If we want to grow Chaeto that soaks up lots of nitrates, then we can’t have just a gentle trickle of water in the refugium. Chaeto has tough, fibrous tangles that are durable enough to handle stronger water flow. And one of the best ways to prevent detritus and debris from settling into the tangles of Chaeto is by allowing it to tumble in the refugium. We do this with consistent, moderately strong water flow.

Let’s try a different example. Say we want to grow Red Ogo Gracilaria to feed to our herbivorous fish in the display tank. In this example, our system has no issues with waste compounds. So, we are not prioritizing nutrient export and that is more of a bonus that comes with growing Red Ogo Gracilaria. Structurally, Red Ogo is nowhere near as tough and fibrous as Chaeto is so we would want our water flow to be dialed back some. 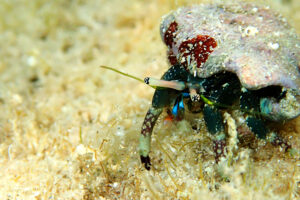 So, we know that inadequate water flow will deter the growth of macroalgae. The adage that “more is better” has a surprising exception when it comes to water flow in the refugium. Yes, a faster overall water flow is preferable for nutrient cycling. Although, some areas of decreased water flow are beneficial to the reef tank system. Because of these weakened flow areas, sediment and debris can settle from the water column. As the debris settles into sheltered areas, detritus begins to form on the sandbed and collect near the rocks in the refugium.

This benefits the reef tank system in a few different ways. First, there will be less particulate organic matter (POM) and debris in the display tank. Which makes for a cleaner display and less work for the reef keeper. This next part works because the design forces the POM to travel to the refugium. If we have done our jobs well and have established and seeded the refugium with a wide range of microorganisms, the POM gets broken down immediately. As soon as the particulates hit the sand, colonies of hungry microbes like R. Palustris will begin to break it down. Our sand-dwelling harpacticoid copepods will also be ready to mineralize any detritus that settles in the refugium.

How to calculate a flow rate for the refugium?

Taking all of this into consideration, how much flow is enough? Well, that also depends on another important factor: the size of the refugium. For a refugium with a deep sand bed and delicate macroalgae species like Sea Lettuce, a conservative rule of thumb is a turnover rate of 5-10 times the volume of the refugium per hour.

Essentially, if we want to export excess nutrients from the water column, we want as much water to flow through the refugium as possible. However, there are limits as to how much flow is enough before macroalgae becomes damaged. Also, we can’t make up for inadequate lighting with excessive water flow. In other words, if our macro isn’t growing at the rate we expect, the solution may not be to increase the turnover rate. Rather, we should look at the lighting output first. A PAR meter can be a very handy tool for instances such as these. 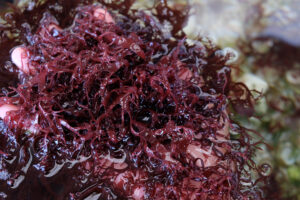 In refugiums where we have Chaeto and other more durable species of macro like Halymenia, we can experiment with flow rates. In some systems, a more rapid turnover rate even as high as 10-20 times the volume of the refugium per hour is appropriate. The macroalgae will also reduce flow rates as they begin to grow. It is important to keep in mind that strong flow rates can kick up the substrate in the refugium and send debris up to the display tank. This can be improved by rearranging baffles or redirecting the inlets.

Powerheads in the refugium

Okay, so this topic can be a little bit controversial. There are reef keepers that swear by using powerheads in the refugium for increased water flow. Then there are reef keepers that rely on the main circulation pump to provide flow to the refugium and nothing else. Whether or not a powerhead will be necessary for the refugium will honestly depend on the system. Generally, if the turnover rate is at a correct velocity, then we should not need to supplement our water flow inside the refugium. We have seen reef tank systems that utilize a small powerhead solely for the purpose of tumbling a mass of Chaeto. This can be a great solution for reef keepers struggling to maintain Chaeto in the refugium.

In the earlier years of the reef keeping hobby, aquarists had been known to build intricate surge devices to mimic the chaotic water flow of natural coral reefs. Chaotic water flow is the type of water movement we see on shallow reefs that are subjected to strong wave action. Chaotic flows are highly variable in turbulence and the direction of the water flow. 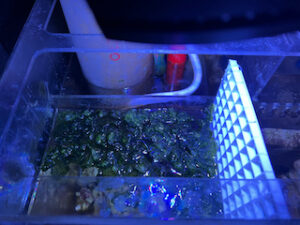 On the other end of the spectrum, we have laminar flows. Laminar flows are consistent in direction and the speed of the flow. The water flow we see mostly in creeks, estuaries and rivers are laminar. This type of water flow may change direction with the tides, but they are essentially stable and predictable.

Sometimes reef keepers only want their macroalgae to grow in one particular direction. Macroalgae that attaches to substrate with holdfasts benefit most from laminar flow. Reef keepers can position the direction of flow to move water horizontally through the bulkiest growth of the seaweed. This helps reduce the collection of POMs and can improve light penetration.

Reef keepers that want to grow a mat or canopy of macroalgae will also benefit from laminar water flow. On the other hand, chaotic flow is great for tumbling Chaeto or other macro that has a more compact growth pattern. Pom Pom and Dragon’s Breath are both going to benefit from this type of flow as they stay more compact than the species that like to spread out. Varieties of Ogo Gracilaria and the majority of lighter macro species only need a moderate flow rate, so the addition of a powerhead should not be necessary if the turnover rate is sufficient.

We do want to add a quick word of caution about powerheads in the refugium. Regardless of whether it is a wave maker or laminar flow powerhead, they can get clogged very easily in the refugium. To avoid costly replacements, the reef keeper should check the powerhead as part of a daily maintenance routine. This might not be an issue for a refugium in an exposed cabinet or adjacent to the display, but for reef keepers who close their refugium behind cabinet doors, this can very easily be overlooked.

Final thoughts on water flow in the refugium

Macroalgae growth rates are highly dependent on water parameters, especially with the speed and direction of water flow. If the reef tank system has a lot of fish and high nitrates, the refugium should be stocked with macro that can handle a higher turnover rate. Remember, if we want our bulletproof refugium to efficiently export nutrients, we want the system’s water volume to turnover as frequently as possible.

We hope this article was helpful in addressing concerns about water flow rates in the refugium. Has this series of articles been helpful in your understanding of some of the more complex aspects of refugiums? Please let us know your thoughts by dropping a comment below!