You are here: Home / Copepods / 4 Tips for Seeding Live Copepods

We get it… Copepods aren’t always cheap. Especially if you use a clean, high-quality, high-density, expertly packaged product with as many as four copepod species at various life stages (e.g. EcoPods!). But, using top-shelf products, you do get what you pay for. That’s why making a little extra effort to get the most out of your premium seed cultures can make such a huge difference!

Aquarists are a rather varied group of folks who quite often have different interests, aims and opinions. Yet, we’re clearly all in agreement on one thing: You can’t have too many pods. The longer hobbyists continuously maintain their systems, and the more benefits they see from having large, diverse pod populations, the more effort they put into boosting their pod numbers.

Whether because the keeper just got a mandarin that is starving, or because he or she is experiencing a relentless bloom of nuisance algae, attempts to establish permanent populations of copepods are often undertaken with a great sense of urgency. In such cases, to get things rolling as quickly as possible, you can take a few steps to ensure that the highest numbers of pods survive the stress of introduction into your tank (i.e. “seeding”)–and, therefore, live to breed and contribute to a resident population. 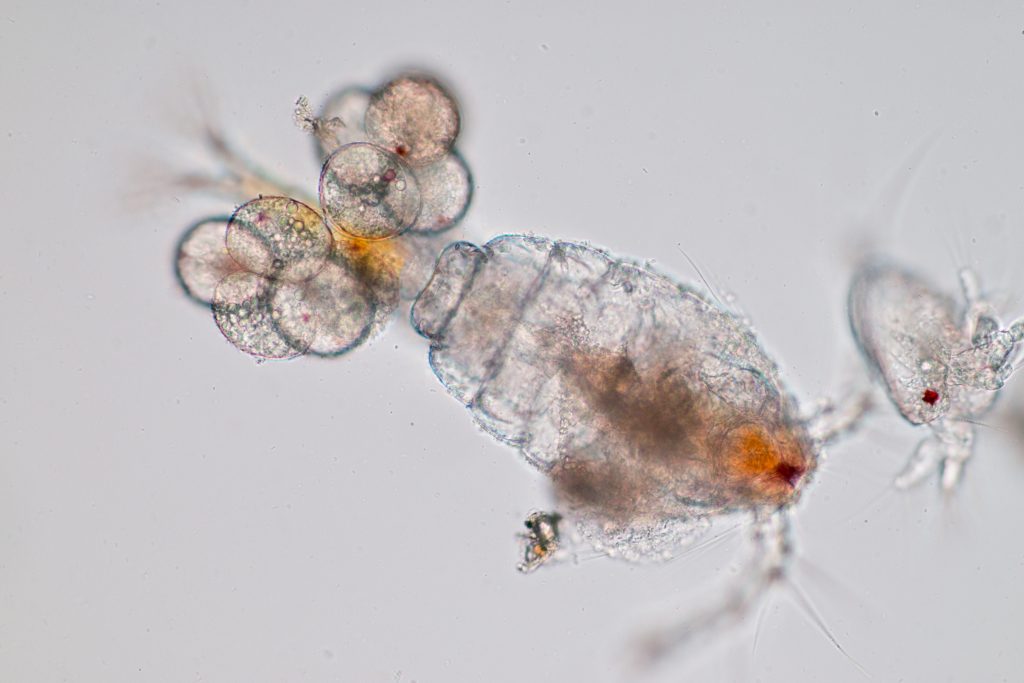 There are several things that affect your pod counts in the long term: (1) Rate of population growth, (2) mortality rate, and (3) carrying capacity. The growth rate of each pod species you add is more or less set in stone, so there’s not much you can do to affect it. Egg maturation time, for example, is pretty consistent regardless of environmental conditions.  You can however take steps to reduce mortality rates and increase carrying capacity.

Mortality rates are basically reflections of the average lifespan of individuals in a discreet population. Old age and natural senescence certainly are factors here, but in the case of pods, few survive long enough to die of “natural causes.” Most often, they are preyed on by zooplanktivores. Now, obviously one of the purposes of having pods is so that your fish and corals can eat them; even so, when seeding, the idea is to limit predation (at least temporarily) so that your seed population can grow to reach self-sustaining numbers. Thus, in addition to minimizing stress during the introduction, you also want to minimize exposure to their predators.

Carrying capacity is the maximum number of pods that your system can sustain based on the availability of vital resources (space, oxygen, etc.). While carrying capacity is largely predetermined by the type of aquarium set-up, there are a few things you can do to maximize potential population size. With these things in mind, we suggest the following:

Copepods are notoriously tough critters. They handle extremes of temperature, pH fluctuation, exposure to ammonia, hypoxia, etc. that most animals cannot. Even so… Cut them some slack! After a couple of days of  being crowded in a jar, your pods will undoubtedly arrive in a stressed state. Sure, plenty will survive introduction to your tank, even if they’re dumped straight in. But, like any stressed animal, your pods have an overall lower mortality rate if you choose to acclimate them.

Again, we understand that you ultimately want your fish and corals to be able to eat the copepods. But to seed them, and allow them to establish a permanent population, you’ll need to provide a temporary refuge for them. And what better place than the refugium? Of course, even if you add every single individual pod to the ‘fuge, they surely will begin drifting one-by-one into the main tank where they’ll likely become some animal’s meal; still, by placing them directly into a sheltered and mostly separated area, they’ll have more to time to recover, resume feeding, start to breed and ultimately increase (instead of sharply plummet!) in numbers.

Don’t have a refugium yet? Your next best option is to add the pods to your tank at night. In this case, you definitely want to open the jar and ideally acclimate the pods as soon as they arrive at your door. But here you would simply leave them in the acclimation vessel until lights-out time in the tank. Why? This, again, is to protect them from predation. What your fish can’t see, they can’t attack! The idea is that the pods will regain their bearing and find a place to hide while under the cover of darkness. By the time the lights come back on, they’ll be much more protected and alert.

Most, if not all, copepod species used routinely for aquarium clean-up or fish food undergo at least one planktonic life stage. During this time, they rely heavily upon phytoplankton as a food source. Availability of phyto indeed limits survival of larval copepods. Thus, in order to speed up the seeding process (i.e. reduce mortality), you’ll want to dose a quality live phyto such as OceanMagik; to increase maximum pod densities (i.e. increase carrying capacity) over the long term, you’ll need to dose phyto as part of an ongoing feeding regimen. Fortunately, this also benefits other filter-feeding inverts such as corals, clams, tube worms, sponges, etc!

Without a doubt, using a better product will yield better results when it comes to seeding an aquarium system with copepods. But particularly when time is of the essence, and you need your seed population to reach carrying capacity as soon as possible, and you want the carrying capacity to be as large as possible, the specific steps you take to introduce and maintain your pods will have an enormous impact. Following the above steps, you should not only be successful in establishing a permanent pod population but can do so in as little a month. Few things ever happen that quickly in reef-tank-time!