In the sense that very, very few animals specialize to eat only one thing, all animals are omnivores, and prefer live foods. For example, when herbivores graze on turf algae, they’re not just eating algae but rather the 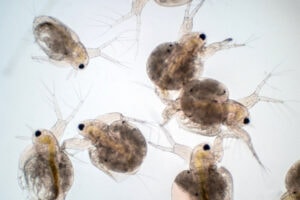 entire “epilithic algal matrix” which includes those bacteria, protists, etc. that live on the algae. Similarly, in addition to their prey, predators additionally consume those things that their prey just ate. This is important, as these “side dishes” greatly augment and balance an animal’s diet.

For an aquarist, it can be difficult in terms of both expense and of management to provide the breathtakingly varied sources of nutrition that are available to corals, fish, etc. in the natural environment. AlgaeBarn’s primary mission is rising up to this challenge; indeed, their truly innovative live, mixed-species products such as OceanMagik and EcoPods have made keeping a healthy, natural aquarium much easier for countless hobbyists.

For sure, live foods are nutritionally superior to dead and/or processed ones. Mixed-species live foods are better still. But even great things can be improved upon! This is why so many live aquarium foods can be nutritionally enriched if “gutloaded” with the right enrichments at the right time. Gutloading really is as simple as it sounds–allowing a prey item to fill its belly with some nutritious food for 30-60 minutes (in a small vessel with aeration) before it is “fed out” (usually along with the enrichment broth) to aquarium animals.

Tiny prey items like rotifers might be loaded with yeast and phytoplankton before they’re offered to tiny predators (e.g. larval fish), and larger prey items such as mollies might be loaded with shredded seaweed or veggie-based flake foods before they’re offered to larger predators such as lionfish. Here we focus on gutloading microcrustaceans such as daphnia, brine shrimp and copepods.

These mainly freshwater and brackish cladocerans (and especially the larger daphniids) have been used as a live marine fish food for generations. They’re perfect for zooplanktivores like anthias, fairy wrasses and firefish. As this author has discovered through tests in a laboratory setting, just a few enriched daphnia included to a fish’s regular diet can have a substantial positive impact on health and growth.

These guys are really great as a vehicle for nutritional enrichments because they can really pack their guts. AlgaeBarn’s Daphnia magna are cultured on OceanMagik and PNS YelloSno. A good soak in these items just before feeding ensures a rich content of fatty acids, pigments and vitamin C (from the former) and vitamin B (from the latter).

Hardly any marine fish can resist brine shrimp (Artemia spp.). They swim in an enticing manner and are easy to capture/consume. These properties make them excellent for eliciting a feeding response from finicky, sick or newly imported specimens. However, only newly hatched brine shrimp (such as those in Nano Brine) are naturally nutritious. As they grow (and consume their attached yolk sack), brine shrimp lose most of their nutritive qualities within a day or two after hatching. However, larger, older Artemia (which might be the only size a larger fish will accept) can be made nutritious again through enrichment! Fortunately, gutloading Artemia is extremely simple as they are indiscriminate filter-feeders. Thus, they might consume a very wide range of items in addition to a base enrichment of OceanMagik.

Copepods as a Live Food 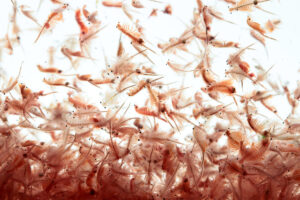 As a group, copepods are the consummate omnivores. They’ll even consume detritus. That being said, phytoplankton is pretty much essential in their diets (certainly among the commonly used aquarium species), particularly during their planktonic larval stages. Live algae simply contain many essential compounds such as fatty acids that are utterly absent in the detritus. And, because copepods cannot themselves synthesize these substances in their own bodies, they must be obtained in their diets. So yes, copepods can be quite nourishing, but only when they have a nutritious diet. So, by extension, if the copepods have a wholesome diet, they will in turn be wholesome for those things that eat copepods, like mandarins.

One might use OceanMagik to gutload copepods exclusively or as a base enrichment. Since copepods feed on bacterioplankton (especially the Oithona in EcoPods), additional enrichments such as PNS ProBio may be used to introduce additional pigments (e.g. lycopene) and probiotic compounds (e.g. streptomycin).

Gutloading  live food like copepods is bit challenging since they are typically “seeded” into tank to form permanent, self-perpetuating populations. Thus, you really only get one chance to gutload copepods in the conventional sense (just before seeding!). This is nevertheless worthwhile, since seeding is often associated (whether intended or not) with a big feeding frenzy (the extent of the predation depends on exact seeding methods). For those who regularly feed/seed copepods (per scheduled shipments by subscription, for example), consistently gutloading each new batch could add up to a big health boost for your livestock in the long run.

Of course, for those resident pods, the less conventional means of gutloading is through phyto dosing. Here, instead of direct, concentrated feedings outside the tank, the pods simply graze on phyto that is periodically added to the system. In addition to feeding the corals and clams, and “absorbing” excess nutrients such nitrate and phosphate, the phytoplankton increases pod numbers and enriches them nutritionally!

Next time you order pods and phyto, treat your fish and corals to an uber-healthy feast with the Ultimate Ecopack and a side of daphnia and brine shrimp!