You are here: Home / Macroalgae / An Overview of the Green Alga Chaetomorpha

The typical purpose of a refugium is to cultivate a thick bed of macroalgae. While some refugium plants like chaetomorpha provide important habitat for microcrustaceans (e.g. pods) and may even be considered to be ornamental, they are used primarily to take up excess nutrients (e.g. nitrate, phosphate) from the aquarium water. In practice, these nutrients exit the system when plant material is harvested and discarded.

Throughout much of the early days of refugium keeping, seaweeds of the genus Caulerpa were most common. However, problems associated with the use of some caulerpoid species in reef aquaria began to become apparent. They can “go sexual,” releasing gametes that can cloud the aquarium water. They are capable of invading and growing aggressively (at the expense of corals) in the main tank. They can leach unsightly yellowing compounds into the water. Sections that float or grow to the water surface can die and degrade water quality. For these reasons (and perhaps out of curiosity about other types of seaweed) marine aquarists tried other plants in their refugia.

Doug Allen (National Aquarium in Baltimore) is credited as being one of the first big proponents of the green alga Chaetomorpha (Family Cladophoraceae) as a refugium plant. It has also been recommended often for use in Ecosystem Aquarium method filters. It can be co-cultured with many other macroalgal species. It is easy to grow and harvest. And, notably, it does not share any of its caulerpoid cousins’ bad traits.

Chaetomorpha and the closely related Cladophora are the most abundant of the Cladophoraceae. Th

e family includes both freshwater and marine representatives and is characterized by having exceptionally large, multinucleate cells. Cells usually grow from end to end, forming long, stiff, wiry filaments. Filaments grow into tangled masses and eventually form mats or balls. These masses, which kind of resemble green scouring pads, are usually not well attached to the substrate. In some cases, they can made to tumble, thoroughly exposing each mass to the light source. In other cases it may be kept loosely packed into a reactor where the one big mass is illuminated from all sides.

Due to the rigidity of the individual filaments, Chaetomorpha (widely known to aquarists as chaeto or spaghetti algae) does not tend to clump up in refugia (even where there are relatively high rates of water flow). This is important, as it allows for an efficient turnover. It also creates an ideal microhabitat for small, beneficial benthic organisms such as copepods. These creatures may easily hide in, feed in and reproduce in the sheltered pore waters within the algal mass. Whole communities can develop over time in larger, thicker, more mature beds, with different organisms inhabiting the upper and lower portions of the turf.

Some aquarists might find this plant to be fairly attractive and wish to keep a small mat in their display tank for ornamental purposes. This is usually fine, as Chaetomorpha is pretty easy to control, though it will be ignored by most herbivores. There are reports out there of tangs slurping up individual filaments like spaghetti, but the plant is overall rather resistant (i.e. tough to rip and chew) to herbivores. There is one notable, and interesting, exception to this, however. The sea slug Ercolania fuscata is specialized to feed on Chaetomorpha and Cladophora; using its radula, it penetrates the cell walls of individual filaments and extracts their fluid contents. Filaments break apart where cells have been thusly drained. Where grazing by these slugs is intense, extensive filament breakage can lead to the loss of large chunks from the mass. While this type of disturbance can certainly break up a well-established turf, it might also aid in the dispersal of the algae to new areas.

Many marine aquarists have declared Chaetomorpha to be the best 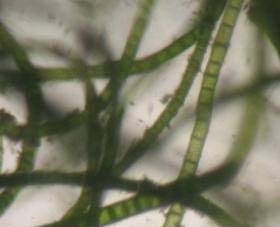 choice of macroalgae for the refugium. Among the most commonly used species of chaeto are C. linum, C. spiralis and C. crassa. These species all have the same basic appearance and serve the same general purposes in aquaria. This prolific seaweed is known to grow quickly and sequester substantial amounts of nutrients. So long as its light source is reasonably intense (just about bright enough to grow most corals), it is quite simple to cultivate. It generally does not require any supplementation of nutrients or trace elements. The matted structure of the masses it forms very effectively traps particulate organic matter from the water column. If copepods and amphipods are present in the aquarium system, the chaeto turf will be like a magnet to them. As pods concentrate in the algal mass, they swiftly consume any organic matter that may have accumulated there.

Nutrients that have been absorbed and assimilated by the plant are only truly removed from the system when portions of the mat are removed. Thus, just as the mass begins to grow into the last open spaces of the refugium, a section (perhaps a quarter of the total mass) should be harvested. This ensures continuous growth, which ensures continuous nutrient sequestration (overgrown, dying plant masses just dump these nutrients right back into the aquarium water). As it photosynthesizes, the algae will consume carbon dioxide. This results in increased pH values, which contributes to stony coral growth. Thus, it has been recommended that those using reactor-style algae scrubbers (where chaeto is especially popular) plumb the unit right after calcium reactors as to capture and take up any excess carbon dioxide that they release.

While other, new types of marine plants might yet become popular, it will be hard to find a macroalgae that is better suited to the refugium than Chaetomorpha. In addition to being resilient and undemanding, it is simple to harvest. It does not leach harmful substances into the water. And, it creates a highly favorable living space for benthic pods. Really, just about any marine aquarium can benefit from the addition of this unique macroalgae.