You are here: Home / Invertebrates / Shrimp / Why Peppermint Shrimp are a Good Choice for Reef Tanks

Lysmata boggessi, commonly known as the peppermint shrimp, is found in the warm waters of the Florida Keys and the Gulf of Mexico. Like their Lysmata relatives, L. boggessi have a semi-transparent appearance. Their bodies are small, no larger than a couple of inches.

Their exoskeleton is light reddish in color, just like the other Lysmata shrimps. The body is also covered in streaked red and white bands. Simply put, they look like peppermint candy canes! However, when peppermint shrimps are stressed, they will become pale. They may even lose their vivid red color and become completely transparent.

Peppermint shrimp can live for a few years in a healthy reef tank. When peppermint shrimp reach maturity, their size ranges from 1.5 to 2 inches. These shrimps can be found in abundance in their natural habitat throughout the East Atlantic coast to the Caribbean Sea and the Gulf of Mexico. These shrimps are commonly found along the rocky undersides of the reef. The Peppermint Shrimp thrives in reef scapes with live rock, plenty of hiding spots, and open scavenging areas.

What are Peppermint Shrimps Best Known For?

The Peppermint Shrimp is well celebrated for its ability to naturally control invasive aiptasia or glass anemones. Keep in mind that L. boggessi is the only species that truly will prey on aiptasia. Lysmata wurdemanni, despite being classified as a “cleaner” shrimp, is more of a scavenger. The Peppermint Shrimp eats uneaten food and decomposing organic material around the reef tank and live rock.

The Peppermint Shrimp, sometimes called the Veined or Caribbean Cleaner Shrimp, can be confused with the camel shrimp, Rhynchocinetes durbanensis. However, R. durbanensis has very distinctive features. With a pointed nose and a hump on its back, the camel shrimp has similar coloration as peppermint shrimp.

Most reef tank residents find peppermint shrimp to be friendly and pleasant. Like other invertebrates, peppermint shrimp will not tolerate excessively high nitrate levels. Iodine is a required trace element and necessary to promote healthy molting. Additional feeding should not be necessary. The peppermint shrimp’s dietary needs will likely be met through scavenging. In fact, peppermint shrimp that are very well fed have been known to stop eating aiptasia!

The peppermint shrimp is highly sought after mainly for its feeding habits. It is a creature that feeds on detritus and aiptasia. What more could anyone want from a clean-up crew? While they are hard-working clean-up crew squad members, they are still sensitive invertebrates. As a result, providing a proper reef tank set up and a diligent maintenance routine is crucial.

Emerging under the cover of darkness to search for food, the peppermint shrimp are most active at night. They are easy enough to care for, provided water parameters are stable and consistent. Most ornamental shrimps are sensitive to acclimate, so a slow drip acclimation is suggested. After they have acclimated to the new system, they are very low maintenance inverts.

Peppermint shrimps are found in water temperatures ranging between 64–78 degrees Fahrenheit. In the reef tank, we would suggest maintaining a stable temperature between 72-78 F. The recommended parameters are pH 8.2-8.4, dKH 8-12, and sg 1.023-1.025. Lastly, we suggest using a timer to adhere to a consistent lighting schedule.

Keeping a natural reef scape with plenty of live rock is a great habitat for peppermint shrimps. It is best to create multiple hiding spots and open areas in the reef where they can hide or search for food. Although peppermint shrimps are shy and peaceful, they can fight for territory if too many are placed in a small system. We would suggest adding no more than one peppermint shrimp per every ten gallons of water. This way, they’ll have enough room to move around, and aggressive behavior should be kept to a minimum.

Try to keep them in small colonies of 4-5 shrimp. They can get stressed from isolation. Another factor in the lifespan of these small shrimps is water stability. Large and frequent water changes and repeated shuffling of rock work can put stress on these animals. Additionally, introducing new fishes too often can further strain sensitive inverts.

Peppermint shrimps are one of the best choices for controlling an aiptasia outbreak in the reef tank. But when they are being added to a mixed reef it is very important to purchase them from a reputable source. This is because L. boggessi so closely resembles other Lysmata species that are not reef-safe. 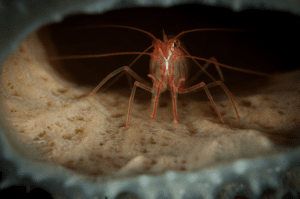 Another reason to purchase peppermint shrimp from a trustworthy source is to promote sustainable practices. Peppermint shrimps are notoriously difficult to breed in captivity, but there are successful breeders. Purchasing captive-bred shrimp will encourage conservation. This works by reducing the demand for wild-caught animals.

The peppermint shrimps are inverts that will be a great fit for many reef tank systems. They are hard-working clean-up squad members and, in most systems, eliminate aiptasia. They are also very fun to watch and will entertain reef keepers with their interesting behaviors! We hope that this brief article has provided good information to decide if peppermint shrimp would be a good choice for your reef.