Maintaining a squeaky clean aquarium environment is no easy task. It requires frequent water changes, constantly rinsing mechanical filters, gravel vacuuming, algae wiping, and so on. It also requires a substantial amount of cash; top-quality filters and filter media are not cheap. If we are to be honest, few of us can say that we do everything we can do to ensure the very best environment for our reef animals. We skimp, and it shows–in the form of detritus and pests.

Natural means of tank maintenance are pretty much a no-brainer. Not only are they less expensive and less time consuming to put into action, but they also are (insofar as naturalistic biological communities can be developed in captivity) a lot more interesting. Collectively, the creatures in these so-called clean-up crews consume detritus and even certain types of pests. However, few clean-up critters actually do both of these jobs. This makes more versatile species, such as the peppermint shrimp, really stand out. 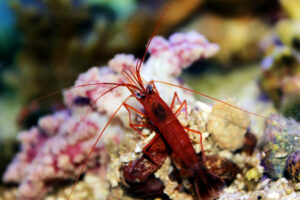 Peppermint shrimp are rather beautiful animals. And much of their time is spent simply sitting pretty. They might perch on top of a rock outcropping, or hang under a ledge. Either way, they are watching–waiting–for that one big morsel of food they can reach out and snatch before some small fish (or rival shrimp) can grab it. As they intently survey their surroundings, they sway back and forth, probably to help them “smell” the waters around them with their sensitive antennae and body “hairs.”

When you feed your fish, and the delectable fish food odors hit the water, the shrimp might do its “dance” with yet more intensity. It might even swim straight into the water column. Sure, maybe it’s not as fast or dexterous a swimmer as the fishes. But rest assured that it will nevertheless do everything in its power to get any piece of food the fish might miss.

And that’s just one thing that is so wonderful about these pretty little crustaceans. They are omnivorous (to say the least) and are absolutely voracious. Peppermint shrimps will eat all sorts of organic matter, however nasty (think dead snails). Some report that it occasionally “picks at”  nuisance algae such as hair algae. This is not an animal that you’ll ever have any trouble feeding. Indeed, this species is a valuable clean-up crew animal and is widely used to mop up organic wastes of all sorts.

Since it gets along very well with its own kind, it’s possible to house numerous individuals to clean larger or chronically “dirty” tanks. They don’t really have much of a taste for macroalgae and so may be used safely to clean the refugium as well.

Perhaps even more than its ability to eliminate organic wastes, the peppermint shrimp is renowned for its habit of attacking and consuming Aiptasia spp. sea anemones. As aiptasia are reviled aquarium pests (mostly due to their ability to sting and kill corals), the peppermint shrimp is extremely popular and widely used for pest control. In fact, these shrimps are the most collected of all aquarium invertebrate species in Caribbean/Floridian waters.

But let’s be clear about one thing: There are actually several species commonly referred to (and sold) as “peppermint shrimp.” This is important to note, as only one species, the true peppermint shrimp (Lysmata boggessi), is known to consistently prey on Aiptasia.

All the different aiptasia-eaters exhibit different levels of effectiveness as well as hardiness, attractiveness, compatibility, ease of care, cost, availability and reef-safety. With all these things considered, the peppermint shrimp reigns supreme.

How many peppermints are adequate for this job? Depends upon how big the tank is, how bad the aiptasia infestation is and how fast you want the pests gone. Since these shrimps get along with each other so well, you could go with as many as one per 15 or 20 gallons tank volume. Nicest thing about this aiptasia-eater is that because it is omnivorous, it won’t begin to starve (like berghia nudibranchs) as soon as the anemones are almost gone. So, if you have lots of aiptasia, feel free to load up on peppermints! 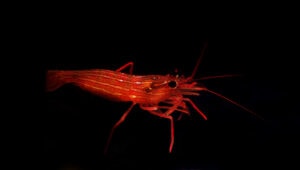 If you do much research about this species (the true peppermint shrimp), you’ll find little doubt about its ability to eradicate aiptasia anemones. These creatures are indeed the tried-and-true aiptasia killer. They’ll likely attack and eat them right in front of you.

But direct predation is just one way that peppermints control aiptasia. Another, important, means is through tank cleaning. Everyone knows that aiptasia flourish in tanks that provide them with lots of food in the form of solid organic wastes. By competing aggressively for this resource, the shrimp deprives the anemone of its favored meal.

For such a cute, colorful and entertaining little reef invert, it’s amazing how much the peppermint shrimp can contribute to keeping a clean, pest-free and healthy aquarium environment!