Whether you are a dedicated, full-time coral farmer or a moderately invested hobbyist, reef aquarium keeping is risky business. This is due partly because of the inherent delicateness of corals in general, but also because coraliculture is still a relatively young (sometimes downright experimental) undertaking.

Coral disease–and disease control–remains as one of the most poorly understand aspects of coraliculture. What is most frustrating about this is that these diseases pose a sort of disproportionally negative impact on our systems; the introduction of a single infected frag can wipe out a tankful of healthy, established colonies. Thus, as our coral collection grows, so does the ante with each new acquisition. 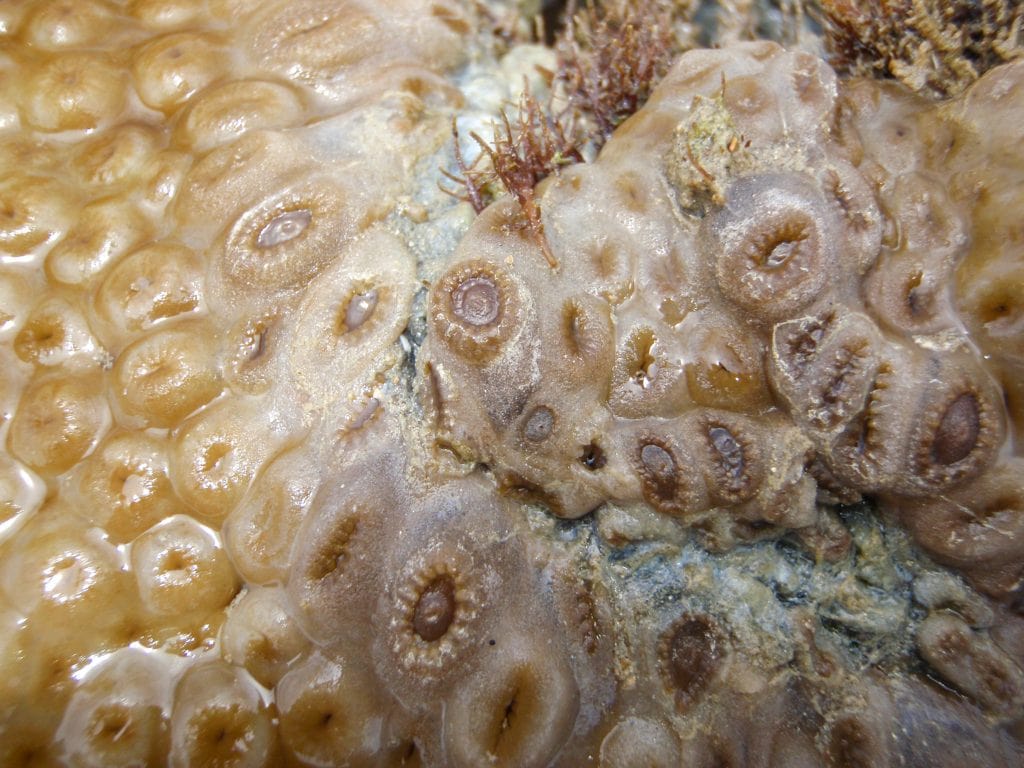 Sure, there are measures one can take to avoid these pestilences. Buying only from highly reputable dealers obviously is a good start. Careful inspection, quarantine, pretreatment, etc. are all good practices–increasingly so over time as you have more and more to lose. Still, these methods of prevention are really most effective at keeping pests such as parasites at bay. Viral and bacterial infections are, on the other hand, considerably more insidious.

Many lethal coral pathogens are microscopic and resilient and thus easily evade the most rigorous screening by aquarists. To make matters worse, they are often ubiquitous in the trade as well as in nature (e.g. numerous pathogenic Vibrio spp.). Corals of course possess various immunological means of fighting them off. However, certain stressors, ranging from failed chillers to aggressive interactions between the corals themselves, can weaken the coral and its ability to naturally resist pathogens.

Water conditions seem to set the stage for these infections. For example, in recirculating aquarium systems (where dissolved organic carbon concentrations can rise steeply in short time), “bad” bacteria may thrive. Studies of such shifts in microbial community shifts reveal that waters in natural, healthy coral reefs support an abundance of innocuous (or even probiotic) Alphaproteobacteria such as Rhodopseudomonas, whereas waters rich in organics (e.g. polluted environments) promote the proliferation of Gammaproteobacteria such as Vibrio.

Perhaps the most devastating disease to afflict cultured stony corals is widely referred to as tissue necrosis. Coral tissue necrosis appears to be more of a condition than a disease in that it most likely has several root causes. One manifestation is slow and steady (slow tissue necrosis or STN), whereas the other destroys colonies within days or even hours (rapid tissue necrosis or RTN).

STN tends to initiate following a bleaching event. Here, most often, the bleaching occurs most strongly at the base of the frag/colony and moves upward, along with associated death of tissue. This can be most annoying for those who endeavor to salvage any healthy polyps in the middle of the fight; the apparently healthy polyp at the tips might cause one to fragment and attempt to regrow the colony, though usually only in vain. At this point, the affected specimen as a whole is far too weakened to tolerate any kind of treatment and is perhaps already very heavily infested with opportunistic protists such as Dysteria, Euplotes, etc.

RTN is far more dramatic in that the onset, progression and killing blow all occur (as you might expect from the name) within a very short period of time. Prolonged exposure to unnaturally high temperatures (over 82°F) seems to invite this expeditious malady. In addition to stressing the coral, high water temperatures may also promote the rapid proliferation of the pathogen. First indication of this disease is undeniably striking: a fast and complete sloughing of the animal’s tissue from its skeleton. Obviously, not much follows. There is some evidence to suggest that opportunistic protists of the genus Philaster play some role in the devastation.

So, it certainly might seem that, in the cases of both STN and RTN, a bacterium such as Vibrio overwhelms a weakened coral, and then protists swoop in like little vultures to feed on dead/dying tissue. In both cases, the disease may continue as infections emerge in neighboring coral colonies. Aside from completely shielding corals from stress in the complicated and tenuous environment of a reef aquarium (good luck with that), what can one do to stave off tissue necrosis?

As of yet, there are frighteningly few suggestions in the literature to offer as an answer to that question. We know so little yet about the specific nutritional needs of corals in general, much less those of individual coral species, in terms of immune system health. The same applies to the indiscriminate use of probiotics or (especially) antibiotics. The best advise might be frustratingly obvious: maintain good water conditions. Aside from keeping dissolved carbon and nutrient levels in check, one should replenish trace elements often. Water flow should be appropriate with no hard, direct currents nor any dead spots where localized anoxic conditions may arise. Water temperature should be maintained very steadily at the lower end of the range. And, perhaps most of all, understand that corals are not merely ornamental objects that can be moved around anytime the keeper wishes to “re-decorate.” Rather, when they appear to be “happy,” leave them be to flourish and grow where they are. Stability is everything here!In light of so few known treatments, or even preventative measures, an awareness of (1) the disease’s symptoms, and (2) the prefatory environmental conditions that cause infection, is paramount. Whensoever tissue necrosis rears its ugly head, remove the affect colonies completely and immediately. This disease does spread and can do so like wildfire. Sometimes, simply knowing when to cut your losses and run can make the difference between a lost frag and an acutely distressing catastrophe!