You are here: Home / Intermediate Education / A Copepod Cornucopia: How to Maintain a Continuous Live Food Source in Your Reef Aquarium

Some of us aquarists are satisfied just to find a pod or two in our systems—just to know that they’re still there! Then again, some of us are always reaching for that endless bumper crop. Those who push for ever higher copepod yields might indeed be on to something really big. 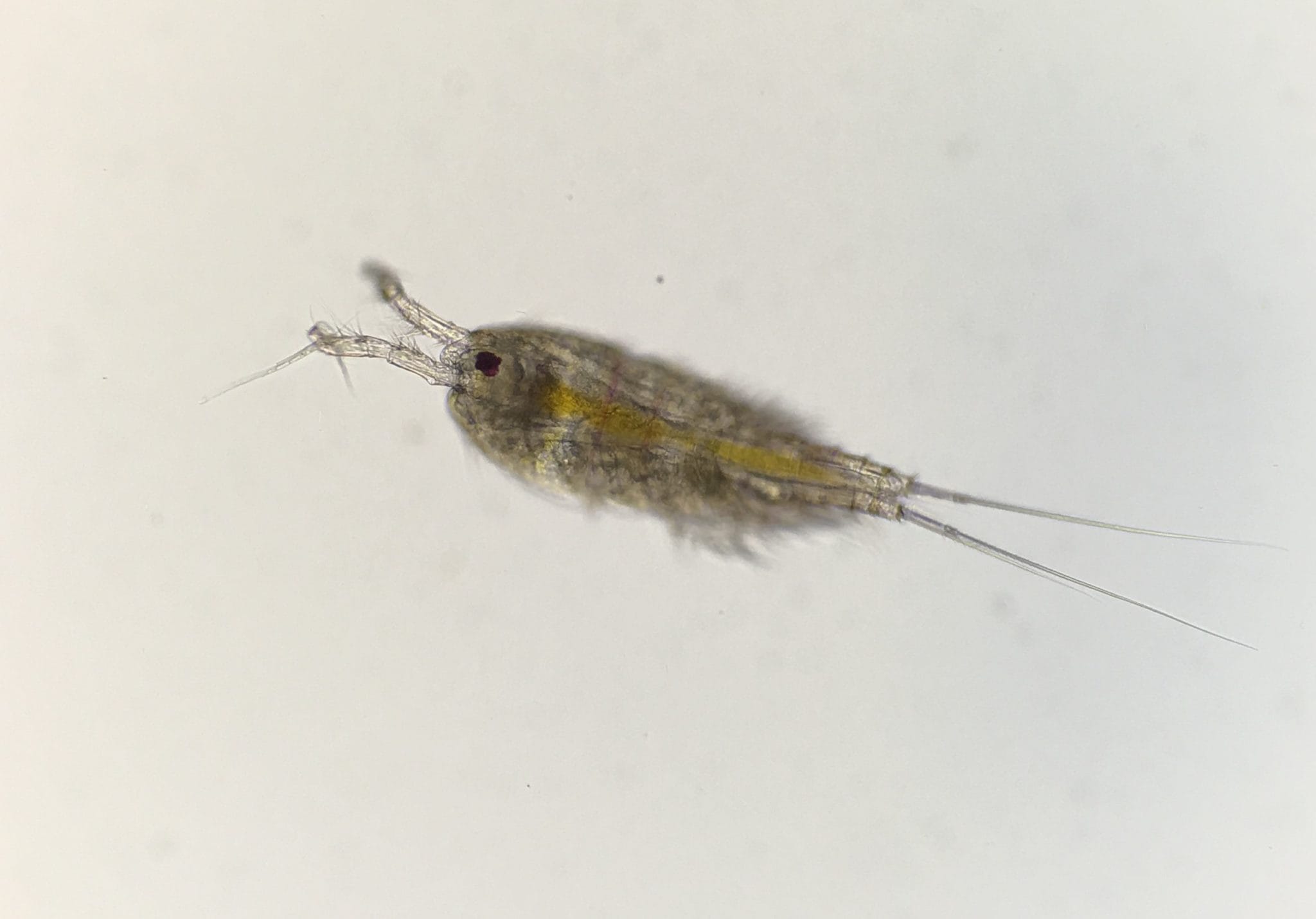 Copepod abundance can significantly influence the health and growth rate of captive animals. This is certainly so with corals and fishes, which are the most important groups of reef aquarium species. A great many of these creatures are even specially adapted to exploit copepods as a primary food source. This is hardly surprising since copepods are an early, key link in just about every marine food chain. So, it should come as no more of a surprise that they can improve the diets of diverse aquarium livestock.

This is best exemplified in the conventional reef aquarium system. In this case, you have different types of animals feeding on copepods of particular life stage (i.e. age/size). The young, larval copepods (called nauplii) are typically pelagic (that is, swim in the open water). Because they are relatively minute and they live suspended in the water column, they are easily snatched up by filter-feeding zooplanktivores.

On the other hand, the larger, older individuals of some species (mainly harpacticoid copepods) live a benthic existence (that is, they spend most of their time on the sea floor). Because these are relatively big and crawl around where they can be easily seen/captured, they are an important food source for smaller, microcrustacean-eating reef fishes such as mandarins.

At all life stages, copepods are extremely nutrient-rich and are a wholesome item for pretty much anything that eats them. They are, in fact, relished and highly targeted by many reef species. Intense predation can strongly suppress or even obliterate an entire population of pods. Therefore, it is sometimes necessary to take specific actions to promote lasting populations within the aquarium system.

A small investment in time and resources will maximize the productivity and nutritional value of your in-house pods. This can be accomplished fairly easily by taking a few simple steps. The first, and critical, thing to do if you want more pod production is this: give them a safe, hospitable microhabitat to live in. A course, rubbly bottom substrate and copious amounts of live rock will certainly help to provide them hiding places within the main tank. But in terms of acting like a full-on pod generator, nothing works like a refugium.

The refugium itself was named for its ability to support (i.e. provide refuge to) massive populations of microcrustaceans such as copepods. One of the most basic, but notable, aspects of the refugium is its partial separation from the main tank. Specifically, pods (especially nauplii) may spill out from the refugium to the main tank, but aquarium livestock cannot get into the refugium. This means that there can be a miniature ecological utopia where pods, while under less pressure from predation, can proliferate to their fullest potential. As they reproduce, they migrate from the hot spot into less densely populated areas. In that respect, you might think of a refugium as a micro-nature reserve.

Most refugia are used to house various species of macroalgae as well as pods. These macroalgae are most often used to remove excess nutrients from the aquarium water. But, as they grow and spread within refugia, macroalgae serve two additional tasks. First, dense algal growths form a very happy, super-high surface area home for pods. The waters within are calm and there is lots of stuff in there for them to eat, including dead macroalgal material.

Also, thick patches of macroalgae make refugia function as sediment basins. This is because of the way in which they dramatically slow water movement in areas throughout the algal mass. Particulate organic matter from the main tank tends to settle out in these parts of the refugium. The residing pods can then quickly swarm in to feed on the resulting accumulations of detritus. So, an undesirable waste product is ultimately converted into a valuable live food!

The capacity of copepods for detritus removal is legendary, and quite welcome by all aquarists. However, pods cannot live on detritus alone. They depend on rich sources of omega fatty acids and vitamin C, for example, from algae. Arguably, algae is most important in the diets of copepods during their larval stage. But algal films can be a huge part of the diet of benthic adults as well.

Many reef aquarium animals benefit appreciably from the regular addition of live phytoplankton. This certainly includes copepods—especially during pelagic, phytoplanktivorous stages. Pods (and most animals, really) require many bio-compounds that are synthesized only by photoautotrophs (e.g. plants). Most significantly, this herbivory transfers the same essential vitamins and minerals further down the food chain as these nutritionally enriched pods are consumed by various sea creatures. Even color-enhancing pigments can be passed on in this manner!

But truly big copepod populations depend upon a large and steady input of algae. For aquarists, this need can easily be fulfilled with regular use of live plankton-based products such as OceanMagik™  Phytoplankton. These products promote high survivability of nauplii. They also nutritionally enrich pods of all life stages, which will in turn nourish your cherished livestock! If you’ve got a planted refugium and you feed phyto, then you’ve got loads of pods. And if you’ve got loads of pods, you’ve probably got a clean tank full of vibrant fishes and corals.