Marine aquarists have always been fascinated with seahorses. These strange animals do make for interesting aquarium subjects. With their erect posture, rigid body, prehensile tail and their odd but clearly deliberate movement, they are unlike all other fishes. However, not all types of marine aquaria are right for seahorses. And, not all seahorse species have as good of a record of captive survival as some others. While a handful of species have earned a good reputation among aquarium hobbyists, it is the lined seahorse that has become most recommended for novices.

The lined (or northern) seahorse is distributed across the U.S. Atlantic Coast to the Gulf of Mexico and beyond—perhaps as far north as Nova Scotia and as far south as Brazil and Venezuela. The depth at which lined seahorses may most easily be found depends partly upon the season; they prefer shallow waters in the summer but retreat to deeper waters (up to 73 meters) during the winter months. Overall, juveniles spend more time near the surface whereas adults might either freely swim in the water column or hold on to some solid object near the sea floor. Lined seahorses are most commonly found in coastal areas such as bays, estuaries and salt marshes. They are particularly fond of habitats with bottoms that are densely covered with plant life (seagrass meadows, macroalgal beds, mangrove forests, etc.). They might also exploit loose or floating vegetation such as Gracilaria or Sargassum weed. 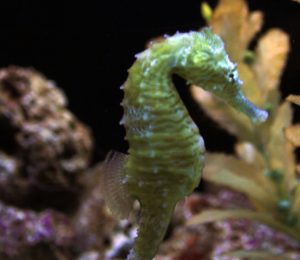 Unlike most fish, the lined seahorse swims in an upright orientation, using its dorsal and pectoral fins as a sort of paddles and rudders. Its body is coated in an armor formed from around fifty hardened plates. Some individuals have fleshy extensions (referred to as cirri) over the body surface. Their common name comes from the white lined patterns that are oftentimes seen over the animal’s “neck.” Base colors vary greatly, ranging from blacks and greys to bright green, yellow, orange, and red. While they are lacking in rich blue colors, some have pale bluish tints that may be discernable. Body color and even patterning can change markedly depending upon physical environment, diet, condition or even mood. Some aquarists observe rapid and dramatic color changes in captive individuals that get excited just before feeding time.

Hippocampus erectus is a mid-sized seahorse at a maximum adult length of 5-7 inches (though some individuals are said to have reached 8-10 inches in length). They reach sexual maturity within nine months of age. Male and female lined seahorses look similar to each other but can nevertheless be distinguished from each other by their distinct morphological features. Aside from having a brooding pouch (in which they protect and brood “babies”), male lined seahorses are usually larger than females and have longer tails. Mature lined seahorses form monogamous pairs and perform a ritual dance each morning to rekindle the special bond.

Lined seahorses can be bred in captivity. Because the species has been aquacultured in such great numbers and for so many generations, high-quality captive-bred specimens can now be obtained. These are definitely preferable to wild-caught specimens, as the species was listed as vulnerable in the 2003 IUCN assessment due to habitat loss/degradation as well as overharvest for the curio and Chinese medicine “industries.” Another great thing about these captive-bred individuals is that they are surely among the most hardy and trouble-free seahorses available to the home aquarist. While its lifespan is 1-4 years in the wild, the lined seahorse generally lives out its full four years (and by some accounts can even reach five) under healthy captive conditions.

Though they are relatively amenable to captive life, lined seahorses (like all seahorses) are fairly specialized creatures and require a few things to thrive. Thus, they are best kept in a species tank. Because they are somewhat shy and are not strong swimmers, they are not good candidates for the typically turbulent, brightly lit reef aquarium; a dimly lit tank with moderate water flow is ideal. Because they are not particularly active, they do not require a whole lot of living space; something like 20 gallons per individual is usually adequate for long-term housing. Concerning tank shape, taller is usually better than longer. There should be plenty of suitable objects (macroalgae, dried sea fans, etc.) for them to cling to. They prefer a specific gravity of 1.020-1.025. The pH value should be 8.1-8.4. Water temperature should be 72-77°F (22-25°C); a temperature of about 75°F (24°C) is ideal.

If happy with its accommodations, a lined seahorse will settle into an aquarium rather quickly.

As it grows more confident, it may be trained to accept food from its keeper’s hand. Though they prefer live foods such as adult brine shrimp, amphipods and larger copepods such as Tig Pods, lined seahorses can be taught to eat prepared frozen foods such as mysis shrimp. Most importantly, they should be fed at least a few times daily. To meet its dietary needs, this obligate nibbler might feed continuously for as much as ten hours and consume a few thousand baby brine shrimp each day. The aquarist can make properly feeding their seahorses much easier by installing a refugium—heavily stocked with big copepods—to the main tank. In this way, adult pods that drift from the refugium into the main tank will supply a steady source of supplemental nutrition (even so, the keeper should directly feed their seahorses a hearty meal at least a couple times each day).

Especially for first-time seahorse keepers, Hippocampus erectus is an excellent choice. Not only is it as attractive and interesting as any seahorse species, it has proven to be resilient enough to withstand the typical rigors of aquarium life. Aquacultured specimens, which are especially well-adapted to captivity, can now be obtained by the home aquarist. These sustainably produced individuals are a conscientious alternative to those that are wild-caught. Provided with an appropriate living environment, excellent water quality and frequent feedings of a high-quality diet, captive-bred lined seahorses can easily be kept and enjoyed for several years.