The domination of the reef aquarium hobby by stony, and especially SPS, corals is pretty obvious. An overall increase of our understanding of growth factors such as lighting technology and alkalinity management have boosted success with such “reef building” coral species across the trade. That notwithstanding, scores upon scores of attractive soft coral species are still available–and yes, still quite rewarding to keep.

Indeed, there are many instances where softies may actually be preferable to keep. Here, we take a quick look at their natural history, aquarium husbandry and provide examples where they may be the ideal choice of coral for a particular application/keeper. 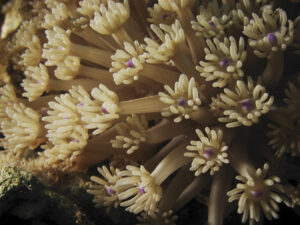 Most soft corals (Subclass Octocorallia, sometimes referred to as the Alcyonaria) have only one type of polyp called an autozooid. The polyps of soft corals typically bear small pinnules. These appendages give the tentacles a fluffy, feather-like appearance. The purpose of these structures is help the polyp collect particulate organic matter such as marine snow. Not as adapt at hunting as their stony cousins (which are much better armed with stinging cnidocytes), softies rely more on their heavy, sticky mucus to trap suspended particles.

As the Octo- in their name implies, the bodies of octocorals are divided into eight distinct sections. In some cases, siamese twin autozooids may form, each pair bearing two semi-fused mouths and 16 tentacles. Because they lack a hard, protective skeleton, you won’t see any large-polyp soft corals. Still, in some cases, the soft coral polyp can become quite elongated.

Sure, it’s hard to not appreciate the stunning colors of many stony corals. Despite that, many hobbyists love soft corals on account of their–well, softness. Because of their flexible, fleshy bodies, soft corals move around in the current. More than a few reef aquarists, new and advanced, are absolutely mesmerized by the movement of these corals as they dance with the flow. Even many SPS-dominated systems include a tree-like octocoral somewhere in a high, conspicuous spot to “add a little movement.”

One nice thing about soft corals is their overall hardiness relative to stonies (though we stress there are obviously many exceptions to this broad generalization). Softies seem to be a bit more forgiving of handling, including rough handling that results in tissue damage. They also seem to be less finicky when it comes to lighting. They are usually a little more tolerant of suboptimal water quality, too; you don’t have to monitor calcium levels nearly as closely with these guys, for example.

To emphasize their ease of care, we’d point to the classic green star polyp coral Pachyclavularia and Briareum spp. GSPs are likened to reef weeds and aside from being really pretty are absolutely perfect species for first-time coral growers. Nearly as hardy, and also suitable for beginning reef aquarists, are many leather corals (Sarcophyton) and various branching types such as Nephthea.

But, as a group, softies offer something for everybody. If you’re interested playing with coral foods than tinkering with lighting systems, then you might be interested in a non-photosynthetic (NPS) coral tank. The great majority of these corals are octocorals. Most are at least somewhat challenging to feed, and some are downright challenging (such as Dendronephthya). 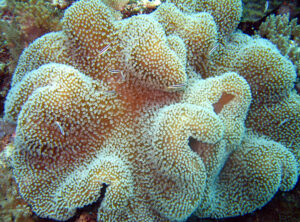 For the most part, any system that can support stonies will support softies. Similarly to SPS corals, soft corals appreciate very strong water flow; this not only helps to bring them food and carry away wastes, but also blows away the “skins” that some types regularly shed (e.g. Sarcophyton).

Certain octocorals such as Sinularia secrete noxious substances that help them compete for space against other (often faster-growing stony) corals. These compounds are not especially toxic, but can build up and seriously irritate tankmates unless they are controlled through (1) frequent water changes, (2) the use and frequent replacement of a quality activated granular carbon or similar chemical filtrant and (3) heavy protein skimming.

When placing soft coral, don’t be afraid to give it plenty of room to spread; when they’re happy, they can grow quite quickly and invade their neighbor’s space in very short time.

And that’s about it! With reasonably good water flow and chemistry, the majority of soft corals available in the trade are not difficult to keep. Most, in fact, are cultured in captivity; these farmed specimens are especially sturdy and simple to care for. Considering their hardiness and unique beauty, it’s no wonder that most aquarists keep (or even specialize in) softies at some point!