When you first set up your aquarium the first thing that comes to your mind is “What are good beginner fish?” Before jumping to that, always ensure that your tank has been properly cycled and ready for livestock. It’s easy to rush into things due to our excitement but it is very important to consider what would be in the best interest of your fish (adding live bacteria can help cycle your tank faster to better protect your first fish). 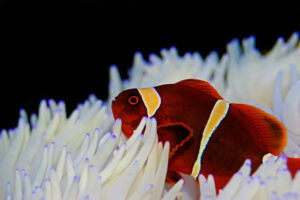 This first beginner fish that I will be talking about has become one of the most sold fish in the industry, the clownfish. Now, there are a few different types of clownfish and I will only be discussing two in this post. The most common one that you will see in aquariums around the world is the ocellaris clownfish. Ocellaris clowns have a very mild temperament and are one of the best fish for novice aquarists to keep. They are easy to train on pellets and flakes.

These clowns can usually be one of the first beginner fish species you add to your aquarium (either as an individual or a pair). If you plan on keeping a pair, you either want to get them both as juveniles or get one that is fairly larger than the other. The reason for this is that all clownfish are born males. So, when they are still juveniles, they haven’t reached sexual maturity yet and therefore will not show aggression. If you get two juvies, as they mature together, the one that becomes dominant will eventually turn in to a female and will usually get a bit larger than the male. Once this clownfish has become a female they can usually show some aggression towards other clownfish around the same size that aren’t their mate. Thus, if you get one sexually mature clownfish, you will want to pair it with a juvenile so the larger one will automatically become the dominant one of the two; this will help prevent fighting between the two fish.

The next type of clownfish I will be talking about is the maroon clownfish. If you’ve heard anything about these guys, it’s that they can have quite an attitude problem and get fairly large. I would recommend a minimum tank size of 50 gallons for this species. If you plan on getting a pair, either get an already established pair, get two juvies or get one that is much larger than the other. Pairing maroon clowns is essentially the same process as the ocellaris. Maroon clownfish are also easy to feed.

The only major difference between the two beginner fish is that maroons are much more aggressive and can get much larger. Maroon clownfish tend to host anemones a lot easier than ocellaris but can also display aggression towards any other fish that gets too close. One important thing to note is that you typically cannot mix a maroon clownfish with an ocellaris. They will not pair and most likely your maroon will cause serious harm to the ocellaris.

Damsels are another appropriate fish for beginners due to their relative hardiness. However, most of them can have quite large attitude problems. My two recommended damsels are the yellowtail damsel and the talbot damsel. In my experience, these two seem to have the least amount of aggression and still add vibrant colors to your aquarium. Yellowtail damsels have a bright blue on their entire body and a solid yellowtail (a similar species is the orange tail damsel) whereas the talbot damsel has a variable coloration that goes from pink to yellow along the body. Both species readily accept pellets and frozen food.

Both can reach up to three inches, are highly active and will usually do the best either singly or in larger groups. The larger the group, the more the aggression is spread amongst one another resulting in fewer injuries.

This next beginner fish will hang out on the bottom of your aquarium and actually helps to clean up your sand bed. The diamond goby is a great addition to any aquarium due to its personality and its habit of constantly sifting sand. When keeping diamond gobies, it is important to keep corals off of the substrate as the fish can spit sand on a coral and damage it.

Diamond gobies spend all day sifting through the sand foraging for tiny food particles. They have an omnivore diet and can be trained to eat pellets and flakes. The most important part is to make sure that food reaches the bottom for them and that the other fish in the aquarium don’t eat all of the food before it gets to them. I prefer to pour the food into the wave maker to let it fly throughout the aquarium rather than let it float at the top or all sink in the same spot; this guarantees every fish gets some food.

Diamond gobies can reach six inches in length and are recommended for an aquarium of at least 30 gallons. They have a very mild temperament–except towards other sand sifting gobies, as they can get territorial. In a large enough aquarium, you might be able to get away with more than one diamond goby but I would personally recommend at least a 100 gallon tank for that. You can never be too cautious when it comes to providing space for your fish!