You are here: Home / Beginners Education / A Beginner’s Guide: How Reef Fish Balance the Ecosystem

Reef fish, whether they are predators or grazers, play a huge part in maintaining the balance of the coral reef ecosystem. Coral reefs that are healthy have fish populations that are robust and diverse. There are many important ways that this relationship helps coral reefs stay healthy. Reef keepers have relied on this relationship for guidance since the earliest days of the hobby.

In fact, keeping your fish healthy is the best kept secret to keeping your coral healthy. Here, we’ll discuss the role that fish play in keeping a healthy reef tank system. 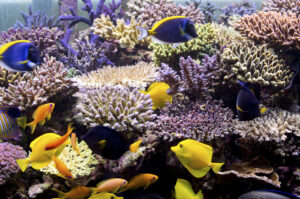 The coral reef ecosystem provides a critical habitat for many varieties of fish, shellfish, and invertebrates. And every living creature on the coral reef has a unique job to do, from the tiniest zooplankton and phytoplankton to the Goliath grouper! So, it would make sense that we would want to mimic the natural diversity of the coral reef in our home reef tank systems.

One of the first questions to be answered when stocking the reef tank with inhabitants is whether the water parameters are stable. Is the system brand new, and if so, has it finished cycling?

Even trace amounts of ammonia can be harmful to fish, especially sensitive reef fish. So, it is better to be safe than sorry when it comes to this subject. We always suggest routine water testing, but this is even more crucial when stocking a new system.

The Ultimate Aquarium Cycle Kit is our top choice for anyone starting a new reef aquarium. This package was put together with the goal of allowing efficient nitrification and denitrification cycling in a reef tank. Besides that, we aimed to design a cycling kit that is a good choice economically and sustainably. And maybe best of all, the Ultimate Aquarium Cycle Kit can cut down the cycling time to as little as five days!

So, now that we have taken care of the basics, let’s talk fish behavior!

Fish aren’t mindless animals driven solely by their natural instincts. They are complex creatures, capable of a wide range of actions and behaviors. As reef keepers, many of us have experience with a fish that plays favorites. They have even been known to display feeding behaviors for certain people!

Most reef keepers know what a “lateral line” is, and many of us have a good idea of how it works. The lateral line is easy to spot because it is a dark row of scales that runs along both sides of the fish’s body the whole way down. Each scale has a depression, whic 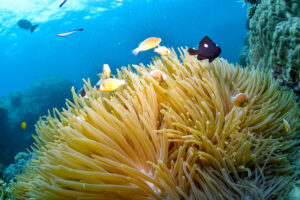 h has a hair that sticks out. These hairs can sense even the smallest changes in the water. The lateral line is a sensory organ that has adapted to help fish survive.

We want to refer to this complex and sensitive organ system for a couple different reasons. First and foremost is water stability. We cannot stress this enough: for the healthiest reef fish to display their natural behaviors in captivity, the water parameters must be stable!

For example, if the reef tank experiences even minor swings in salinity, it could lead to fish that cannot display  natural behaviors. For reasons such as this, we recommend the use of automated top-off units (ATOs). With an ATO, the system will consistently replenish fresh water as it evaporates. ATOs can be the greatest contributors to maintaining water stability in the reef tank.

Now, let’s move onto another very important factor, fish aggression. AlgaeBarn offers only the healthiest captive-bred fish in the market, but it is still a fish-eat-fish world! It is thought that captive-bred fish may display aggressive behaviors because they are not as preoccupied with foraging as fish on the natural coral reef are.

Aggressive behavior from some fish is to be expected, and mild forms are even a sign of a stable reef tank system. When healthy displays of dominance or defensiveness are appropriate, they include protecting breeding nests and setting up a social hierarchy. When fish bully or kill other fish in the tank, this is an indication that the reef keeper has an issue on their hands.

How Reef Fish Carry Nutrients Throughout the Coral Reef

If we look at some of the most vibrant and healthy coral reefs on the planet, we can identify a few basic characteristics. First, these reefs are in the Indo-Pacific region, and we know that this area of the world is very special for a few reasons. First, there is an incredible amount of diversity here. There is thought to be roughly 700 different species of coral and 3,000 species of fish in this region alone! 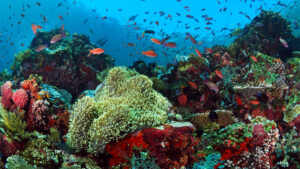 Another factor is that the waters here are extremely clean and nutrient poor. A lack of nutrients means there is less algal growth. Seaweed does not typically grow in this region as densely as it does in the Caribbean. Researchers are still finding new ways that nutrients move throughout the ocean’s food web. And it may come as no surprise, but fish are responsible for the bulk of it!

In the reef tank system, we will want to stock our fish as distinctly as we can to help move the nutrients. A diverse mix of fish of varying sizes and habits will be our main goal here.

For example, a good mix of bottom dwellers can help keep particulate and waste from settling into the corners of the reef tank system. The reef keeper might want to look at Biota Links Goby, ORA’s Sharknose Goby and ORA’s Tiger Goby. These fish will help snag excess food from the water column before they even sink!

In larger systems, there are even more options for keeping a diverse fish community. Damselfish are a great way to add color and movement in the reef tank system. These fish are important in the reef as they swim freely in the water column. In fact, most of their days are spent out in the open foraging for food. Although the Damsels can be aggressive, ORA’s Lemon Damselfish is known for its less territorial behavior.

Another reef fish that greatly contributes to the health of the reef are the Surgeonfish. These grazing fish are more commonly known as Tangs. These fish are simply the best at keeping nuisance algae growth to a minimum. And thanks to the advancements in aquaculture, Biota is now offering captive-bred Yellow Tangs. 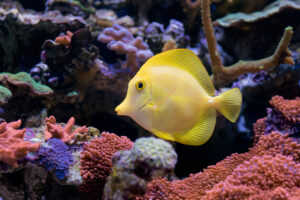 Having a diverse group of reef fish is also a great way to promote a healthy food web inside the reef tank. AlgaeBarn makes it easy to choose the right copepods for feeding the reef fish! Whether you already have a stable pod population or are setting up a refugium, AlgaeBarn has you covered!

When stocking a reef aquarium, it’s good to remember that no single species of fish can do it all. Rather, we are building a team of workers who will all bring something unique to the table! Fish with different behaviors will not eat the same thing, either.

Strong and diverse fish populations are indicators of a healthy coral reef. When setting up a new reef tank system, we highly recommend making biodiversity a top priority. And you can trust that the fish offered by AlgaeBarn are the healthiest captive-bred specimens available!