You are here: Home / Saltwater Aquariums / Unique Algae Eaters for your Aquarium

Even though battling algae is best done by finding and solving the underlying nutrient or lighting issue, it certainly doesn’t hurt to have a few algae eaters in your tank to help keep it in check. Home aquariums naturally have more nutrients than wild ecosystems, and the slightest change in maintenance can lead to short term algae problems until it is addressed. While most websites and fish stores like selling hobbyists fish like tangs or Foxfaces, what do you do if you only have a 60 gallon tank or less and cannot house these fish? What about a nano tank? Are snails really the only option now? Nope! Although less talked about, there are several smaller species that will eat algae even better than tangs and Foxfaces. 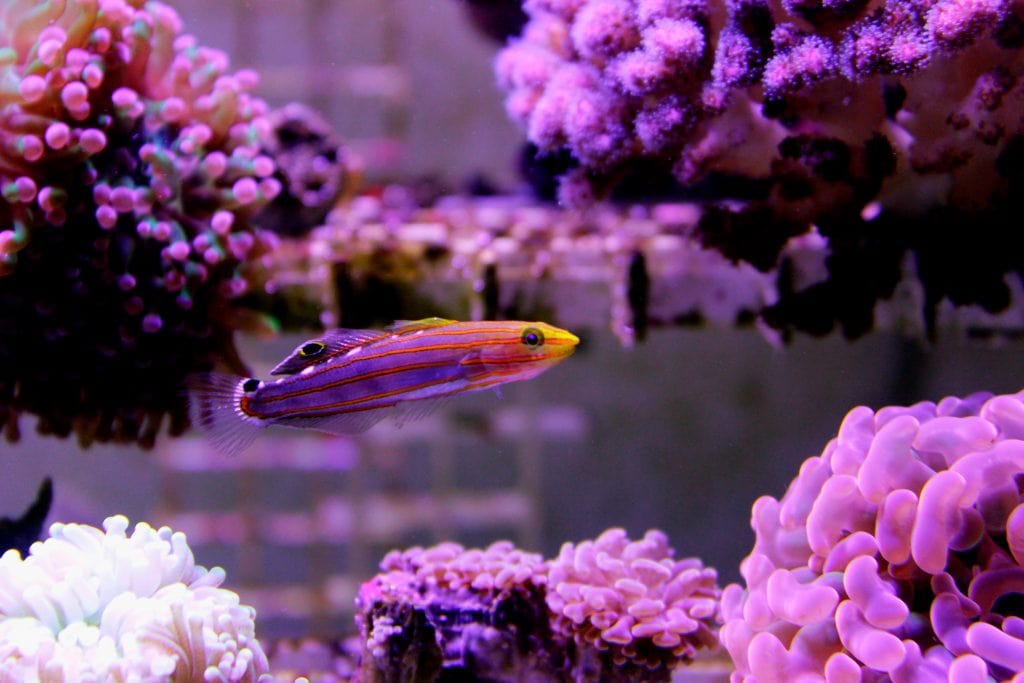 Also known as the Rainford Goby and Orange Lined Goby, these little guys are a great nano fish all around. Many nano fish are perching type fish, or ones that are usually seen sitting on the rocks or sand bed. Very few “free swimming” fish can live in tiny tanks (8-15 gallons), but this is one of them! These small fish are brightly colored, with a green to blue body, red horizontal stripes, yellow tinged face, and small white polka dots. Shy at first, they are incredibly peaceful towards tank mates and can even be kept in groups! Large or aggressive tank mates may scare them, so add your goby before these fish. Orange Lined Gobies graze on hair algae as their primary food source, and wild caught specimens may be hesitant to try prepared foods. For this reason, aquacultured gobies are recommended. Not only does it make our hobby more sustainable, but it ensures you will receive a healthy fish who is ready to mow down algae, but won’t starve when the tank is clean. Most of the time, tank bred fish are already trained to eat frozen food, flakes, and pellets in addition to hair algae.

Everyone knows that the Algae Blenny is great at controlling algae in aquariums. But, they can get rather large, I have had them reach 5 and 6 inches in length. And, many individuals get fairly aggressive and prevent you from keeping other blennies or gobies that look similar to the Lawnmower. Alternatively, try a Tailspot Blenny! These small blennies only require a 10 gallon tank or larger, unlike the larger species. And, they have flashier colors. Their namesake is the large black spot at the base of their tail, and they possess a orangish grey body with a bluish head and black and orange streaks on their cheeks. They can also be kept in pairs! Algae is one of their favorite foods, and they will keep their rock crevice looking pristine. During the day, they will venture out of their home crevice and clean any spots on your rockscape that could use some algae control. Aside from algae, they are not picky eaters. Pellets, frozen foods, and flakes will all be accepted by Tailspot Blennies.

This little goby is very similar to the Court Jester Goby, although not as widely known. Hector’s Gobies are small fish only requiring a 10 gallon tank, and is completely reef safe. Their bodies are black with blue or red undertones, and they show off flashy, golden horizontal stripes and a spot on their dorsal fin. Another great “free swimming” fish for nano tanks, they are also very peaceful tank members and can easily be added together in a group. Even better yet, they are known to pick through the sand looking for bits of detritus, algae, and small detritus worms. But, they are not a danger to any tank mates or invertebrates aside from this. Hector’s Gobies are another easy fish to feed, as frozen and small dry foods are readily accepted.

Two Spots are very similar to Tailspot Blennies. They have strikingly similar body shapes, but are a more slate grey color with two black or dark brown spots on each side of their stomach area, and a black line through their eye. They are a good option for even 5 or 8 gallon pico tanks, as they typically don’t reach sizes much larger than one inch. Like most others on this list, they are easily scared by large or boisterous tank mates and make a better option for a peaceful set up. They appreciate being kept in groups, although it is not necessary. Once again, a good herbivore prepared or frozen food is accepted by these fish, as they aren’t incredibly picky eaters. 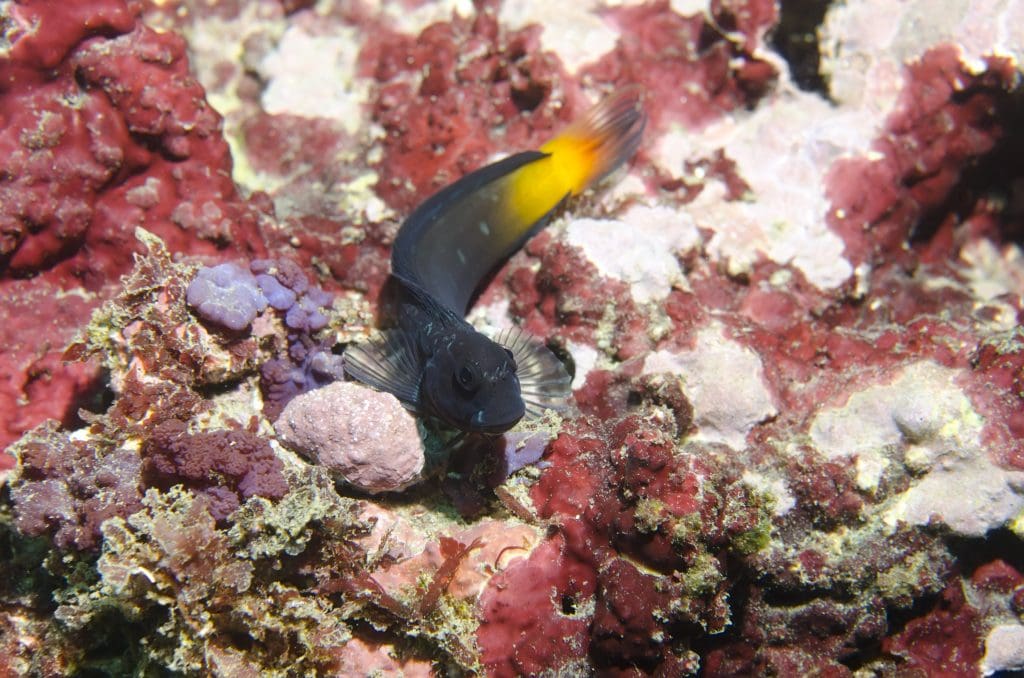 Bicolor Blennies are relatively popular fish, due to their low cost, pretty markings, and outgoing nature. Much like a Lawnmower Blenny, these larger fish will perch on your rocks and help keep them looking clean as algae eaters. Bicolors are slightly bigger than the others on this list, attaining sizes upwards of 4 inches. And, they are still considered a nano fish, but need at least a 30 gallon tank. In smaller tanks, they do have a tendency to become somewhat territorial. Male and female pairs can be kept, but multiple males should not be housed together except in exceedingly large tanks. Their colors are comprised of a grey head and stomach that fades into an orange posterior, and lovely blue eyes. I will add that a few hobbyists mention that their Bicolors do not touch hair algae, but the vast majority of owners report that they do indeed mow it down happily. As with most animals, it really depends on the individual! And, some Bicolor Blennies develop a taste for coral, especially green colored LPS. Although cases of this are few and far between, it scares some reef keepers and this fish is considered “reef safe with caution.” Most people offer their Bicolors algae wafers and nori in addition to prepared foods.

Another large but not huge option is a Lemon Peel Angel. Although most dwarf angels are reported to pick at liverock and are considered algae eaters (I have had luck with Flame, Rusty, and Eiblii), Lemon Peels are generally regarded as the best in the business as far as the angels go. Many hobbyists that have owned a Lemon Peel say that hair algae and bryopsis quickly took root in their tank after they have lost their angel. This truly is a beautiful little fish, with its bright yellow body that is accented by electric blue outlines around the fins, gills, and eyes. They can reach sizes of about 5 inches, and should be kept in a tank of at least 55 gallons. But, they make for a beautiful replacement for hobbyists who want to own a Yellow Tang but simply don’t have a large enough tank! They are not a picky eater whatsoever, and will eat whatever is offered. They typically will demolish nori, so it is highly recommended to supplement their diet with seaweed, especially in low-algae systems. As with Bicolor Blennies, a few individuals may develop an appetite for fleshy corals, and this angel must be labelled “reef safe with caution.” I personally have never had a problem keeping these fish in reef tanks.

I always like to have a strong clean up crew and an algae eating fish or two as a first line of defense against algae blooms in my tank. Algae is something every single hobbyist will have to deal with at some point, and it is a natural occurrence both in the aquarium and on the actual reef. While maintaining proper water chemistry will drastically cut down on the amount of algae in your tank, you will still experience it in some form. And, since so many aquarium keepers have tanks under 60 gallons, it is important that these smaller algae eaters are recognized and not overlooked. While so many stores are willing to sell unsuspecting people Foxfaces and tangs as a cure-all for algae problems, these fish often get ignored even though they typically eat more algae more efficiently than tangs and Foxfaces. Surely, any algae eating fish in this list would make a wonderful addition to any saltwater aquarium and keep it free of unsightly algae!