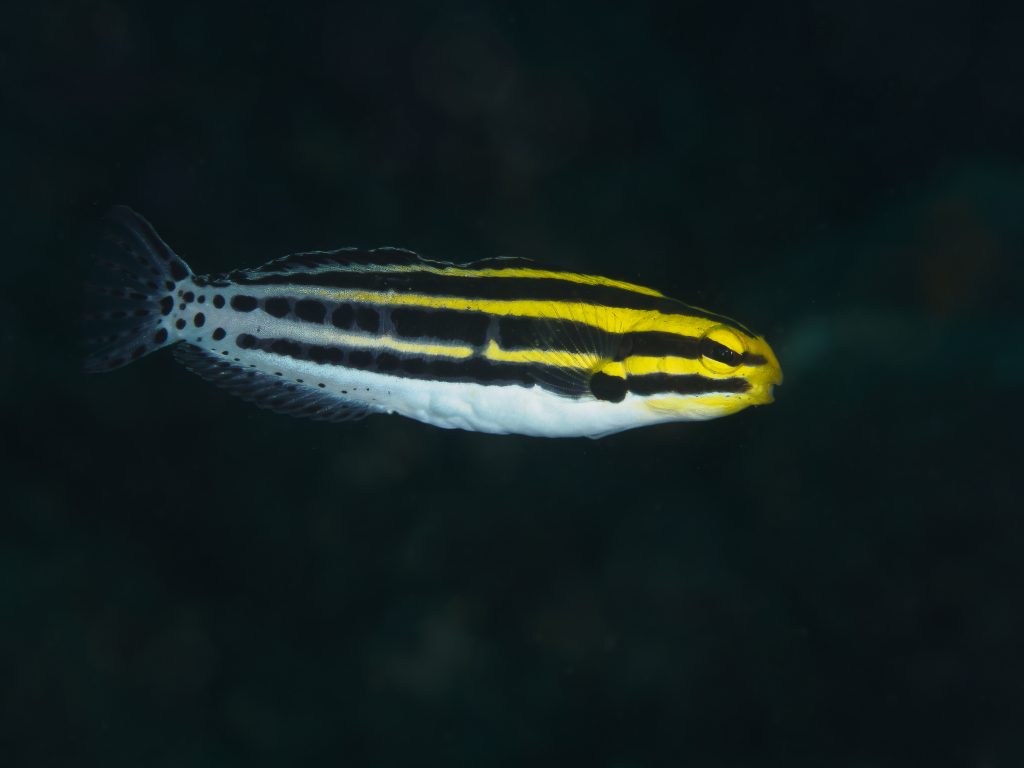 There are a lot of blennioid fishes–something to the tune of like 900 species in 151 genera. Lots and lots of these are available for–and indeed quite appropriate for–the home aquarium. In general, blennies are hardy in captivity. They are small and so can live happily in smaller tanks. They are reef-safe and peaceful (though males in particular are apt to get into scraps with other males of the same species). They are extremely resistant to disease. They are easy to feed. In all, they are quite easy to care for and make great “beginner fish.”

All that being said, there is one group of blennies that is particularly desirable: fang blennies of the genus Meiacanthus. These differ from their fellow blennioids in at least a couple significant respects. For one, unlike other blennies which tend to be very drab in coloration, fang blennies have bright colors and bold patterns (probably to advertise their venomous bite, which we will soon discuss). Also, whereas most blennies tend to spend most of their time lying on the bottom, fang blennies are agile swimmers and spend most of their time hovering in the water column.

Not the typical blenny

Several Meiacanthus spp. blennies have become available as captive-bred in recent years. Of these, almost undeniably, the most popular is the striped blenny (M. grammistes). For sure, one of the most appealing aspects of this fish is its coloration. It sports a platinum base color with a splash of bright golden yellow over its head that fades past the shoulders. True to its name, it bears four thick, black horizontal stripes–three over the body and one at the margin of the dorsal fin. The stripes run all the way from the forehead to the caudal peduncle, tapering at each end; at the posterior end, the taper breaks into dots. Dots are larger over the caudal region, but decrease in size to become numerous tiny spots over the rays of the tail.

M. grammistes grows to a total length of just over four inches. While body shape/size varies little across the genus, there are notable differences in tail fin shape. In the striped blenny, tails of mature individuals develop a lovely crown-shaped form. In exceptionally healthy adults (likely males), crown tips may grow into longer filaments.

The striped blenny is native to reef-associated open waters in the Western Pacific Ocean from Australia to the Ryukyu Islands. Usually, it lives a solitary life. However, large numbers of striped blenny dens may be found in close proximity to one another. In some cases, pairs (or even harems) may be found inhabiting a single den.

In the aquarium, this species is at home in the water column where it is always on the hunt for zooplankton. It is especially hyperactive for a blenny. Though it does like to claim and defend a small, cave-like nest (something to provide in the aquascape!), it is generally out “in the open” and is not nearly as inclined to hide as other blennies. Unlikely behavior for a small reef fish, right? Why would such a small, colorful fish swim around so conspicuously–without apparent fear in the constant presence of hungry predators?

Yes, fang blennies actually have fangs. Two big ones in their lower jaw. And they are venomous. And just to be sure that the big fish know it, their aposematic colors/pattern serve as a clear warning of this. Rather than cause pain, the main purpose of the venom is to stun, relaxing the jaw long enough for the blenny to escape.

But never you worry, it isn’t a deadly poison. Reportedly, a bite from a striped blenny is something akin to a bee sting. Something you’d certainly prefer to avoid, but not life-threatening. The meiacanthid venom contains a 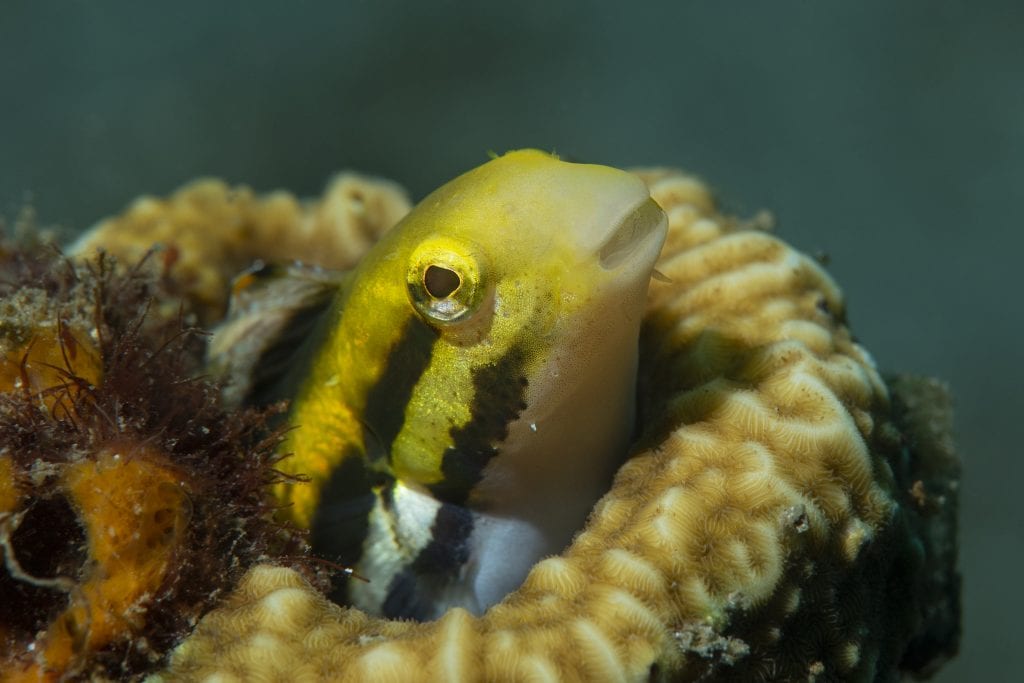 neuropeptide that targets opioid receptors (interestingly, this substance is currently being studied for its potential use as a painkiller). While the venom (unlike most fish venoms) doesn’t hurt, the bite apparently does. Because of that, and the risk of a rare allergic reaction, aquarists are advised to exercise reasonable caution while handling this animal.

Striped blennies frequently “pair up” and spawn in captivity. Spawns are evident by the tiny, pinkish, adhesive eggs that line the walls of the den. While it is next to impossible to raise the brood in a home aquarium, watching the courting, spawning and brooding behaviors of the parents can be extremely interesting and rewarding. With that being said, one should only keep multiple specimens of this fish together in larger tanks; territorial disputes can result in fatalities. Even in larger tanks that house multiple striped blennies, the rockwork should include many caves and crevices to hide in.

Striped blennies (especially aquacultured specimens) are undanding in their care. Tank-bred individuals can be kept in a 20-gallon tank. A little cave to nest in and ample swimming space is all an individual needs to thrive in captivity. They are not especially finicky about water quality. Most foods are accepted greedily; they do however prefer small crustaceans such as copepods, brine shrimp, etc. While live food is of course ideal, this fish’s diet is satisfactorily supplemented with items such as Fresco Cyclops and Can O’ Cyclops. Perhaps the most important thing to remember with the species is to keep the tank lid on at all times!

Everyone loves blennies. But, fang blennies are really awesome. Attractive, active, entertaining and simple to maintain, the striped blenny is a great choice of fang blenny for any reef aquarium big or small.