The marine aquarium hobby has been dominated by corals–reef tanks–for quite a while now. As a consequence, over time, aquarists have shied away from many of the cool predatory fish groups in favor of “reef-safe” types. For sure, the designation of reef-safe doesn’t necessarily suggest a peaceful disposition; just think back on some of the tangs or dottybacks you’ve owned. Conversely, some predators are actually quite peaceful in the sense that they don’t attack any animals that they cannot swallow. Indeed, many of these predators won’t even harm corals. The only thing that disqualifies their reef-safeness is their tendency to consume smaller fish as well as shrimps, clams, etc.

That all being said, the somewhat vague and fluid term “reef-safe” certainly might be stretched to include a less conventional, large reef aquarium community featuring groupers, lionfish, tuskfish, puffers, moray eels, etc. In other words, a community that may include predators so long as they are not coral predators. While these fish cannot be trusted with small, vulnerable, tasty animals of certain kinds, they will (more or less) spare your corals. But they get do get BIG and require oversized aquaria. There are exceptions to this, however; one such exception is the frogfish.

Frogfish are a group of small (usually less than four or five inches length), shallow-water anglerfish that make up the family Antennariidae. Most if not all of the anglers you’ll ever encounter in the aquarium trade belong to this family. One big reason for this (in addition to the fact that many anglers live in very deep water) is that most of the other anglerfishes grow to large sizes. In addition to their modest mass, frogfish are (like most of their angler brethren) extremely slow-moving, low-energy animals and therefore can be kept in relatively (we stress relatively) small tanks. 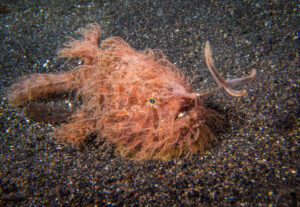 Antennariids occur in nearly all tropical and subtropical marine waters (with one notable exception being the Mediterranean Sea, oddly enough). The greatest abundance of frogfish lies within the tropics, with Indonesia being a particularly rich frogfish hot spot.

Unlike so many of their anglerfish cousins which typically inhabit the dark abyss, frogfish tend to stick to the shallows (<100 meters depth). Frogfish habitat in general consists of rubbly, but fairly open, bottoms. The stone or coral rubble often is covered with seaweed, sponge, and/or other sessile organisms. Frogfish are masters of camouflage and mimicry, bearing adaptations such as body textures and colors that match their surroundings. In many instances, the animal blends in so well with its surroundings (including associated seaweed, sponge, etc.) that it may be difficult to see even when you’re looking right at it and know that it’s there.

The short, stocky body of the frogfish is without scales. The skin may, however, be covered with tiny projections called spinules. A specialized dorsal fin spine, called the illicium, works like a fishing rod to entice and drawn in prey (in a just few species, the illicium is absent). The illicium is topped with what is called an esca, which acts as the lure. Every frogfish species has a unique esca; some resemble tiny shrimp, whereas some resemble worms, and some just look like little blobs. What is strange is that even though each species’ lure is quite distinct, all species have generalized diets that include virtually animal they can swallow (shrimp, small cephalopods and other fish including members of their own species).

Frogs in the reef

Forget that these animals are not particularly colorful, flashy or active. They absolutely do make amazing and unusually rewarding fish to keep. And, as indicated earlier, they do not require a particularly large amount of living space. They are not especially picky about water quality and rarely succumb to disease. Overall they are quite easy to maintain, but for one thing: Feeding.

This isn’t a fish that will swim around nibbling pellets off of the aquarium sand. Frogfish are exclusively predatory and only accept whole, real foods. Some only accept live foods. This presents a few potential husbandry challenges. First, maintaining a steady supply of relatively large live food items (goldfish, ghost shrimp, etc.) can be costly and time-consuming. Then (in order to ensure highest nutritional quality of the live food), one must go through the extra effort of gut-loading the prey with a wholesome item (e.g. fortified spirulina flakes) just prior to feeding the frogfish. Then, you have to hope that the prey ends up in the frogfish’s mouth before it succumbs to the salty water.

This is where smaller tanks actually assist in keeping a frogfish. In a small tank, the prey is always closer to the predator. Sure, you cannot keep active predators in a small tank, but those fish wouldn’t work anyway since they’d always steal the frogfish’s food. Certain small, slow ambush predators such as dwarf lionfish and waspfish, however, are appropriate tankmates since they have similar feeding requirements. In fact, it is possible to feed each individual in this manner with tongs. Once trained to accept food off of the tongs, you may even be able train them (including the frogfish) to accept frozen fare such as silversides.

And the aquascape itself? There’s not much to it; just some rubble rock on the bottom and you’re good to go! These fish aren’t very picky about that, so long as they have some rock to walk over and grab onto with their hand-like pectoral fins.

A moderately sized species tank is best for both these non-social creatures and their keeper. This makes keeping them even more easy and enjoyable. For sure, such a tank is a great diversion from the typical rigors of the “normal” reef tank!