You are here: Home / Other / 7 Newbie Aquascaping Mistakes

Undoubtedly, aquascaping is an art form. Designing and building the rock structure in a reef tank can be as satisfying as keeping the reef creatures themselves. But we should always remember that aquascaping entails a whole hell of a lot more than mere “decorating.” The hardscape in a reef tank must be built not just to look cool, but also (1) function as a naturalistic and hospitable home for your livestock and (2) be easy for you to work around during routine maintenance.

We all know what is and isn’t pleasing to our eyes. But beginner aquarists, in particular, might benefit from some aquascaping tips in order to meet the more practical objectives. This article highlights a few common aquascaping mistakes and offers suggestions for avoiding them.

No doubt about it; healthy, mature reef rocks it much prettier than plain old base rock. However, when it comes to pricey, fancy live rock, you can have too much of a good thing. The reason is die-off. Much of the desirable stuff of conventional live rock (coralline algae, Halimeda algae, mushroom anemones, zoanthids, etc.) are photosynthetic and require bright light to survive. Buried within the reef structure, these organisms will die for lack of light. The resulting decomposition contributes to a decline of water quality. Starting with clean (e.g. dry) base rock is far less expensive and can greatly reduce water-fouling die-off (plus you won’t introduce pests in places where it’s difficult to see and remove them!).

A stable hardscape is a safer hardscape. Thus, it is best to build the reef base over the bare tank bottom before adding a sand bed. This avoids rock collapses (and perhaps a broken tank) that can occur as sands shift from strong water currents, burrowing fish, etc.

3. Save the big ones for last!

Especially when aquascaping for the first time, it might seem best to build the base of the reef base with the biggest pieces of rock, and then add progressively smaller pieces over that. The problem with this approach becomes more apparent after you notice these smaller pieces constantly falling down. Plus, attaching corals to them can be a nightmare. Plus, the bottom receives inadequate water flow. The alternative is to use the smaller rubbly pieces as feet upon which you position larger pieces; the largest rocks are placed over the very top. This leaves many little caves at the bottom of the structure which enhances water flow while providing many hiding spots for animals. And, the solid crest is stable enough to securely mount even large, heavy coral colonies.

When building the base, it may seem best to shove each rock up against the one next to it. Feels a little more stable, right? However, this approach can reduce internal flow through the structure. That’s why it’s best to leave a little space between each rock as you are aquascaping the reef base. This further enhances water flow and also creates nice crooks and crannies for small critters to hide it. Particularly in the deeper, dark areas, this practice promotes the eventual development of cryptic invertebrate communities.

Particularly in smaller tanks where space is limited, the aquascaper may be tempted to shove piles against the back wall of the tank. This is a bad idea for a couple of reasons. First of all, this can create areas of poor water flow. Moreover, it restricts access to algae wiping, siphoning, etc. Therefore, it is best to leave at least a few inches between the hardscape and the tank glass (even the back). The first time you’ll have to dig out a dead fish or fallen magnet, you’ll be glad that you left the working space open!

Starting out, it’s easy to get impatient to “fill” the tank. And buying new rock provides new opportunities to add complexity to our hardscape. However, some restraint here can pay off in the long run. This is in large part because you’ll need that space later after you add corals. And, even more so after your corals grow!

Acquiring a modest amount of rock makes it easier to leave space during aquascaping for the fish to swim. The best approach is to leave a single, relatively large open area. Sure, the use of void space is a powerful aesthetic tool when trying to create a visually appealing display. But it also is critical for the long-term health of highly active swimmers such as tangs, rabbitfish, anthias, etc. 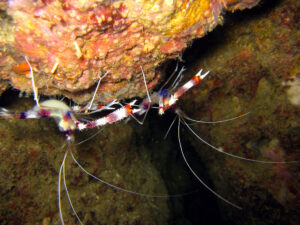 A great reef structure can be both beautiful and serve practical purposes. The best (that is, most functional) aquascapes present a maximal amount of surface area for reef animals (sponges, small tube worms, etc.) to colonize. For these creatures to flourish, it is necessary for brisk water currents to carry lots of food/oxygen in and all of their wastes/CO2 out. Further, where there are lots of overhangs and nebulous passageways, all of the fishes, shrimps, crabs, brittle stars, etc. have ample places to shelter.

What’s more, better aquascapes allow for easy maintenance. And an easily maintained tank is a cleaner one!

After setting up and maintaining a few reef aquarium systems, it’s easy to see the importance of building a stable but cavernous rock base. After all, the base is the core from which your entire reef will grow!