Sea lettuce (Ulva lactuca) is an extremely versatile refugium macroalgae. It’s big, verdant fronds can add a little “greenery” to a reefscape. Highly palatable and nutritious, it serves as an excellent live food for larger herbivorous fish and invertebrates. Its broad “leaves” can grow in dense clumps, providing an enormous amount of microhabitat for small, beneficial protists and animals such as copepods. But if there is one thing Ulva really excels at, it’s removing excess nutrients from the system water.

For sure, the ability of sea lettuce to “absorb” nitrate and phosphate is a thing of legend. This is only possible because of its extremely fast rate of growth. Even among the green algae, which are known as a group to be pretty fast growers, sea lettuce can really pack on the biomass rapidly. This of course can happen only when two important resources are available: Very intense light and nutrient-rich water.

Sea Lettuce: One to grow on

The Ulva we have for sale is an opportunistic seaweed that occurs widely in estuaries and shallow coastal waters, which are some of the most eutrophic (nutrient-rich) environments on Earth. Its capacity for rapid proliferation is in part a competitive adaptation. That is, it outcompetes other macroalgae for space and outcompetes both macroalgae and microalgae for nutrients. This includes competitors/epiphytes that might grow on its fronds. In many cases, these seaweeds live in boom-or-bust habitats where waters might be highly eutrophic during one season, and then fairly oligotrophic (nutrient-poor) during the next. Depending upon local ambient nutrient regimes, either nitrate or phosphate can be limiting. In most cases however (at least in the wild), nitrate appears slightly more often to be the limiting nutrient. 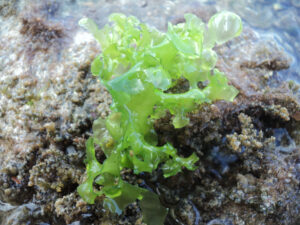 No worries about that here, right? Aquarists seem to have no problem supplying the fertile waters. Overfeeding and overstocking are the main culprit, usually combined with poor filtration and inadequate water exchange. Well, reef aquaria are brightly lit environments, which sets the stage for endless battles with nuisance algae. These algae can grow at a terrifying pace when nutrient levels are elevated. And that’s not merely an issue for a tank’s “looks,” but also threatens the health of corals. Runaway hair algae problems in particular have killed bazillions of corals and caused countless reef aquarists to give up forever.

Many solutions have been put forth to solve this problem. As a very natural approach, macroalgal nutrient sequestration has appealed to quite a few hobbyists. Nowadays, planted refugia are almost a standard component in aquarium filtration systems. Ulva undoubtedly is among the most popular of seaweeds used in refugia; but given its unusually high capacity for sequestration, it’s a little surprising that these macros aren’t just a bit more popular than they presently are.

Provided that very intense lighting is used, sea lettuce is rather easy to cultivate. It grows well in loose clumps on the bottom, but may eventually grow to form a solid sheet across the refugium water surface. It doesn’t need–and perhaps prefers–moderate or even weak water movement. While strong flow doesn’t necessarily harm it, it does increase the odds that you’ll be peeling wads of seaweed off the refugium pumps or screen on a regular basis. To use Ulva in a high-flow application, one would best circulate the mass in kreisel style refugium where it more easily stays in constant motion (and is evenly illuminated). The easiest way to compensate for low-flow applications (i.e. increased turnover times) is simply to use a larger refugium; that is, a larger algal bed can strip more nutrients from the passing waters at a given flow rate.

As the algal mass begins to fill the grow chamber, sections (preferably older parts) are removed and are either (1) discarded or (2) are fed out to your tangs, angelfish, trunkfish, rabbitfish, sea urchins, etc. This process of continual harvest is how the nutrients are ultimately removed or recycled; it is important to time correctly because overly dense masses grow more slowly (thus removing fewer nutrients). In the worst case, the mass begins to die back, consuming oxygen and making a nasty mess as it decomposes and releases all those nutrients back into the aquarium water! To keep the mass happy and growing at an optimal rate, try to cut back around 25% of the mass as it fills about 75% of the available grow space. 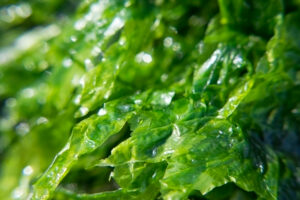 From Caulerpa to Chaetomorpha, fast-growing green algae have always been favored for planted refugia that are designed primarily for nutrient sequestration. While all different macros have their own sets of advantages and disadvantages, it’s hard to argue that any species accomplished the task of nutrient removal like Sea Lettuce. This “nutrient sponge” can take any levels you might throw at it, yet not crash hard and die off as the nutrient levels fall. It doesn’t secrete copious allelopathic compounds (unlike most Caulerpa) and therefore won’t irritate corals. It’s fleshy in texture and tasty (unlike Chaetomopha) and can therefore be used as a high-quality live food. Though it may not really be very new to refugium keepers, sea lettuce definitely has not seen its day in the sun–yet!

To Tumble or Not to Tumble?

If you decided to use a refugium for filtration of the reef tank than you most likely know how you want to stock it. But, if you’re still in the planning

Read More about To Tumble or Not to Tumble?